See Atlanta office price per sqft in 2021, along with vacancy rates, sales report, and construction stats. 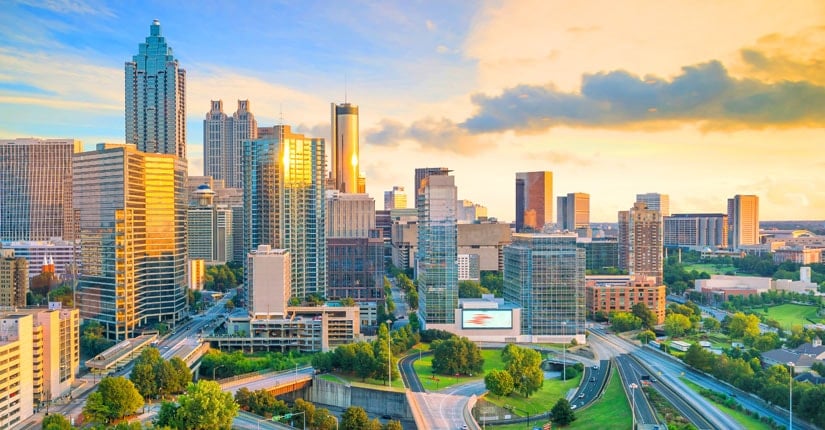 Up-and-coming ventures, as well as established businesses, have every reason to flock to Atlanta. The city provides mobility, plenty of local talent, a business-friendly environment and a robust commercial real estate inventory.

True to its tradition as a transportation hub, the city is home to Delta Air Lines, and its Hartsfield-Jackson Atlanta International Airport is one of the busiest airports in the world. Atlanta also lies at the heart of the region’s railroad system.

Film and broadcast operations, such as Pinewood Studios, Turner Studios and CNN, have also boosted the Atlanta commercial real estate market. Plus, U.S. and international corporations — including The Coca-Cola Company, Home Depot, UPS, Chick-fil-A and AT&T — are also part of the city’s business ecosystem.

Data provided by Yardi Matrix, properties over 50k SF, includes office with retail
Roughly 22.33% of the total office space in Atlanta, GA is comprised of properties between 500K to 1M square feet, and buildings between 50k to 100k square feet represent 7.84% of the office inventory.

Class A office space holds a 63.27% share of the overall Atlanta, GA office market, while Class B office assets make up approximately 14.81%.

In 2021, roughly 60% of a total of 262,400 employed in Atlanta worked in Management, business, science, and arts occupations, followed by 17% in Sales and office occupations and 13% in Service occupations.

An estimated 92% of Atlanta residents aged 25 or over hold a high school degree or higher. Of those, 17% are high school graduates, 19% attended some college, 32% earned a bachelor's degree, with an additional 24% holding post-graduate degrees.