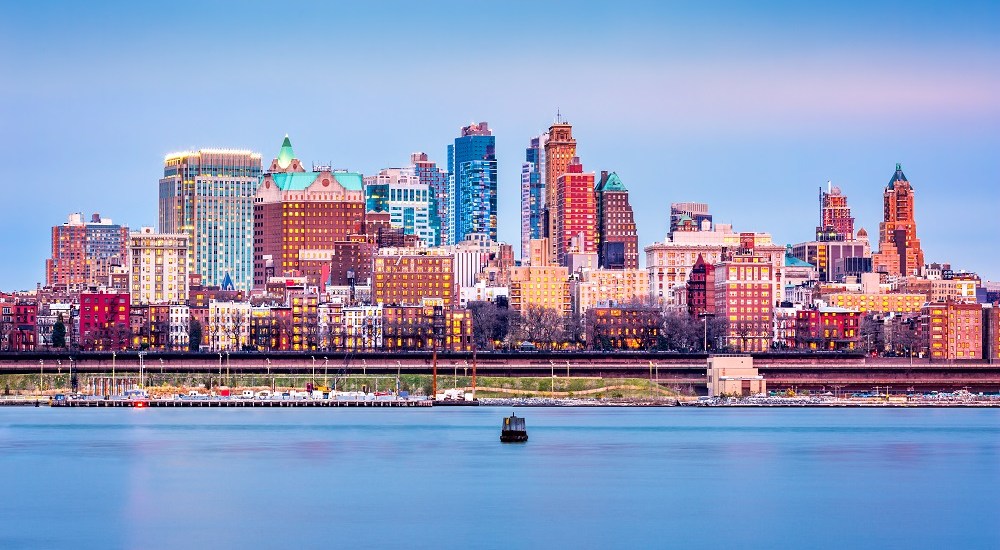 Brooklyn’s Waterfront: From Industrial to Office through Adaptive Reuse

New York, New York — once the nation’s leading manufacturing powerhouse, the city boasts a long and heavy industrial history that many might have forgotten. Yet the Brooklyn waterfront is riddled with fragments of the city’s industrial past, lying in wait to be brought back to life. Some have already been lost: the old Dutch Mustard Company building in Williamsburg, the Greenpoint Terminal Market and the Red Hook Graving Dock—the National Trust for Historic Preservation declared Brooklyn’s industrial waterfront one of the country’s 11 most endangered historic places in 2007.

Nonetheless, adaptive reuse projects are more in style than ever, as a preferred alternative to demolition, especially in Red Hook, Greenpoint, Williamsburg and the Navy Yard, which are currently experiencing a building boom to meet increasing demand for Brooklyn office space. By embracing the adaptive reuse concept, developers can bring new meaning to historic buildings, while preserving the connection to previous generations and the area’s industrial heritage. This resourceful alternative is also less costly than demolition, more time-effective and reduces waste and pollution.

We enlisted the help of Yardi Matrix data to compile a list of the most notable adaptive reuse projects in the borough. It comes as no surprise that all the properties on our list are former industrial and self-storage properties that have been transformed into creative offices. Historical industrial gems are highly sought-after by digital and tech companies, as the spacious halls overflowing with natural light can easily be converted to open office space, which is the design of choice for most companies nowadays. Check out our list of Brooklyn adaptive reuse projects below: 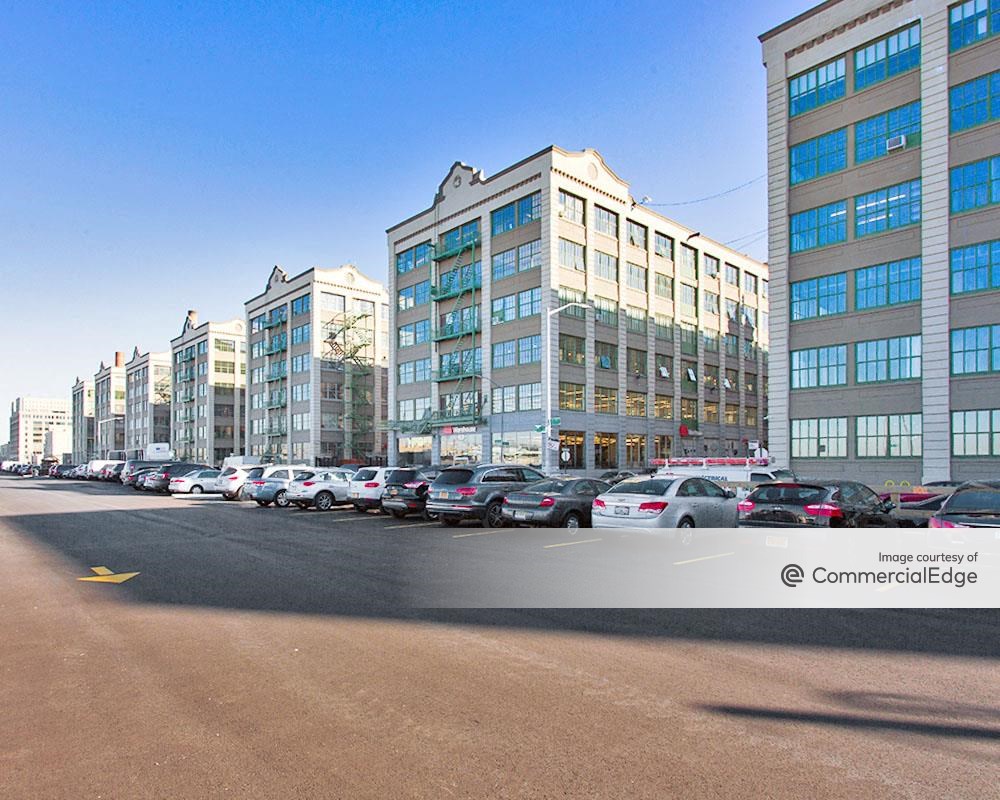 The 7 million-square-foot Bush Terminal complex at 892 3rd Ave. in Sunset Park first took shape in the early 1900s as the largest multi-tenant industrial property in the U.S. The facility once referred to as ‘Bush’s Folly’ was the first of its kind in the U.S., and was firing on all cylinders up until the decline of railways following World War II.

The industrial complex was renamed Industry City in the 1980s and got a new lease on life in 2011, when a 10-year, $1 billion redevelopment project was unveiled. Angelo, Gordon & Co., Jamestown and Belvedere Capital joined long-term owners Cammeby’s International and FBE Limited in 2013, when they acquired an ownership stake in the 16-building property. Then, in late 2015, Bank of China and SL Green provided a $323 million loan to recapitalize existing debt on the redevelopment project, per Yardi Matrix data.

Dubbed ‘The SoHo of Sunset Park’ by The New York Times, Industry City now lies at the forefront of the area’s revitalization. The Brooklyn Nets NBA team was also drawn to the historic site, opening a 70,000-square-foot, $50 million training center on a warehouse rooftop. The massive Bush Terminal complex also incorporates 773 parking spaces and 500,000 square feet of first-floor retail space. 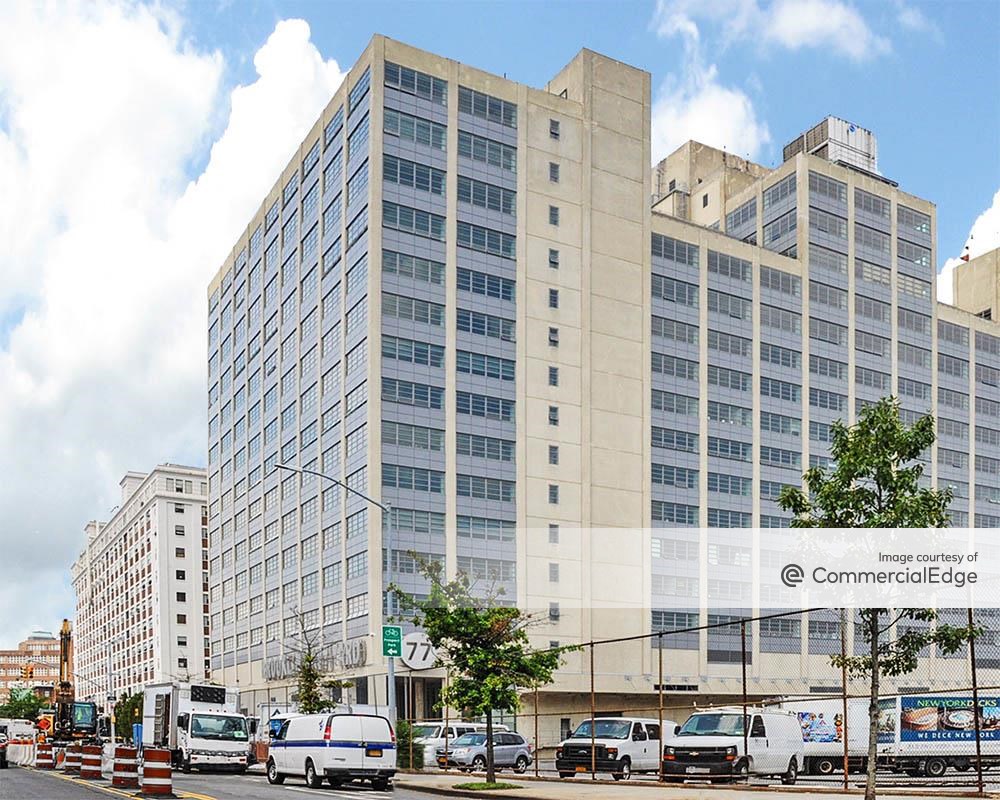 Originally built in the 1940s as a storage facility on the corner of Vanderbilt and Flushing Avenues, the 1.2 million-square-foot Building 77 is currently undergoing a $185 million renovation project. Scheduled for delivery in the second quarter of 2017, the property will be transformed into a state-of-the-art tech, design and manufacturing hub that is expected to create 3,000 jobs and expand employment at Brooklyn Navy Yard by more than 40%. The 17-story building at 63 Flushing Ave. is owned by the City of New York and managed by the Brooklyn Navy Yard Development Corp., according to Yardi Matrix data. The property includes 60,000 square feet of retail space and is expected to earn LEED Silver certification from the USGBC. Brooklyn Brewery and Russ & Daughters have already signed on as ground-floor anchor tenants. 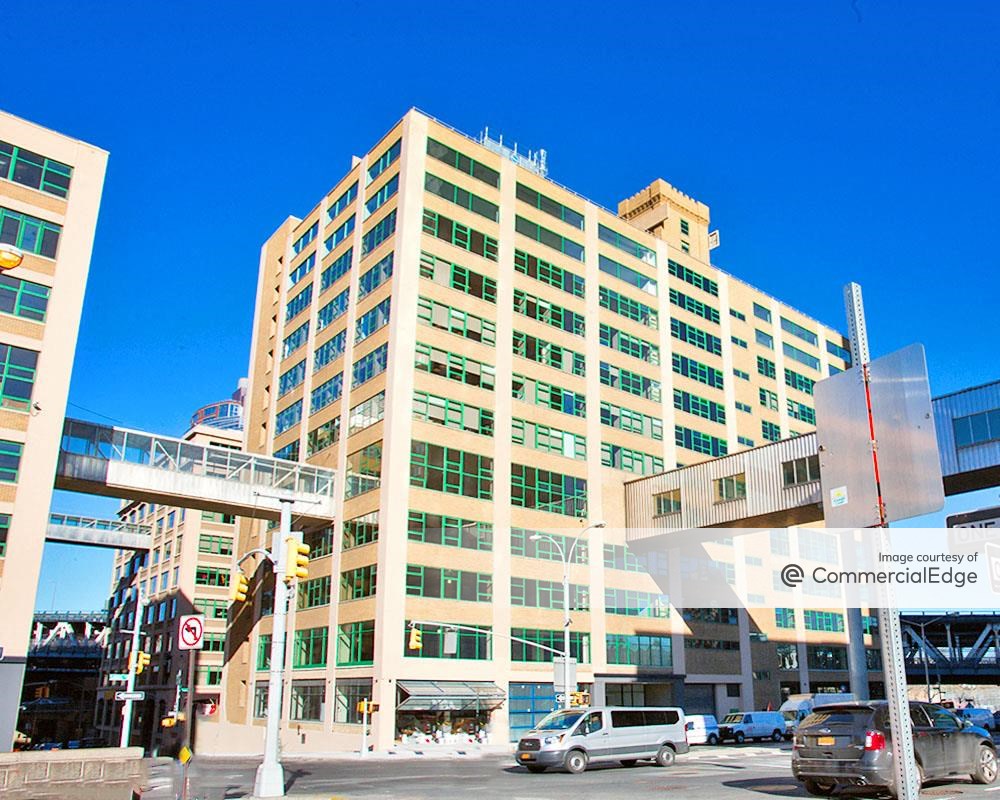 A five-building campus on the East River waterfront, Dumbo Heights incorporates 880,000 rentable square feet of office space and 80,000 square feet of retail. The former industrial complex began taking shape back in 1909 and was converted to office space in 2015. Kushner Cos., RFR Realty and Invesco Real Estate shelled out $375 million in 2013 to acquire the property from the Jehovah’s Witnesses, along with the hotel asset at 90 Sands St., according to TheRealDeal. Notable tenants at the site include WeWork and Etsy.

Originally built for industrial use in 1915, the 10-story, 650,000-square-foot building at 470 Vanderbilt Ave. was converted to data center space in 2001, then converted to office space in 2012. Current owner RXR Realty paid $195 million to acquire the long-term lease in 2014 from Starwood Capital Group. 470 Vanderbilt is subject to a 77-year, unsubordinated net ground lease held by Solil Management, due in 2077, per Yardi Matrix data. The building is conveniently located minutes away from the Barclays Center and the Atlantic Yards development, providing easy access to major NYC subway lines. 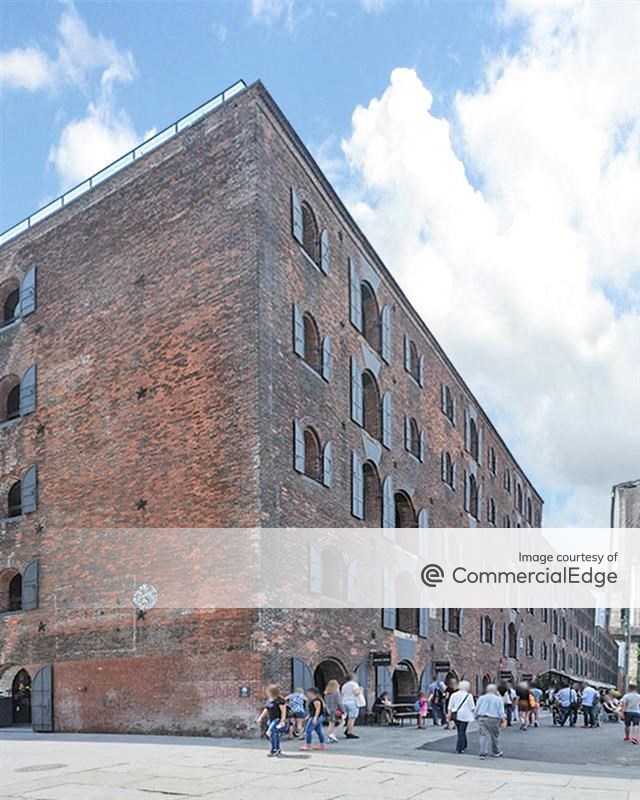 The 19th century warehouse at 53-83 Water St. in Brooklyn’s Fulton Ferry Historic District was converted to office space just last year. After sitting vacant since the 1960s, the 500,000-square-foot complex got a new lease on life in 2013. A partnership between Midtown Equities, Rockwood Capital and the HK Organization was selected to transform the neglected property into a vibrant mixed-use project that includes 420,000 rentable square feet of office space and 80,000 square feet of retail. The property now houses West Elm’s corporate headquarters and might soon be home to Wenner Media, the publisher of Rolling Stone Magazine and Us Weekly.

The 10-story, 240,314-square-foot building at 29 Ryerson St. was originally completed in 1951 and is currently being converted to creative office space. Madison Realty Capital acquired the vacant warehouse in 2015 for $45 million and embarked on a renovation effort to turn it into a Class A, LEED-certified space for creative and technology clients. The asset boasts above-standard ceiling heights and major exposure on Ryerson Street and Flushing Avenue and is located right across the street from the Brooklyn Navy Yard office space development. Moreover, the building lies within the Brooklyn Tech Triangle, an area incorporating downtown Brooklyn, Dumbo and the Navy Yard, that is a popular destination for top-tier tech companies. 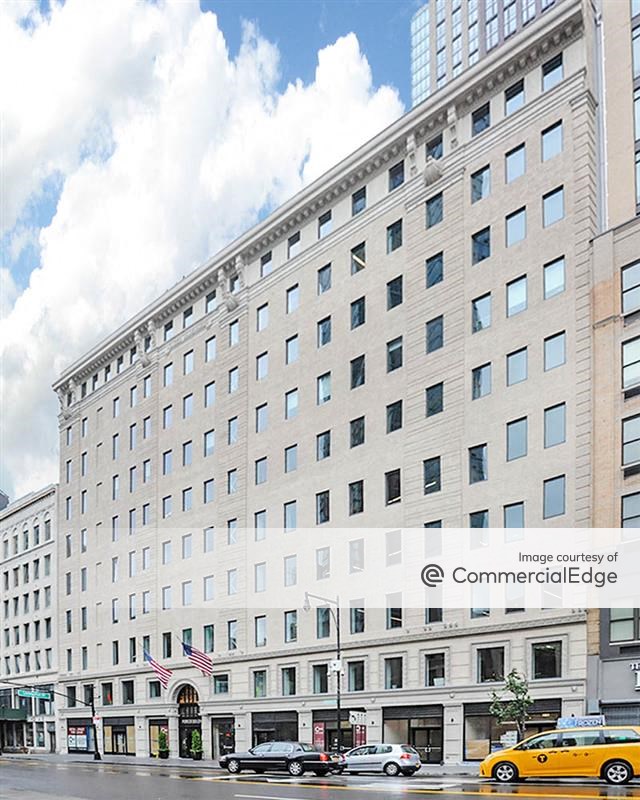 Developed in 1920 as a self-storage facility, the 10-story, 263,480-square-foot building at 41 Flatbush Ave. is currently being redeveloped into office space, with delivery scheduled this spring. The building, which occupies a full block, was acquired by Quinlan Development Group and Building & Land Technology in 2015 for $89.4 million, the Wall Street Journal reported at the time. The joint venture then commenced renovation work on the property, which is set to include roughly 21,000 square feet of retail space, new windows, a limestone exterior façade and a rooftop deck. Beyer Blinder Belle is the architect of record, according to New York Yimby.

The three-building, 131,000-square-foot complex at 100 N. 11th St. in Williamsburg was constructed in 1896-97 and converted to office space in 1989. The site originally served as the headquarters for the Hecla Iron Works, which supplied ornamental work for many New York City landmarks, including the American Surety Building, the New York Life Insurance Building and Grand Central Terminal. The four-story asset has many distinctive features, one of them being its unpainted cast iron façade—it is the only building in New York City known to have its entire façade treated with a special high-heat process that gave it a rust-proof black patina. The property includes three one-, two- and five-story buildings and is owned and managed by Priority Properties. 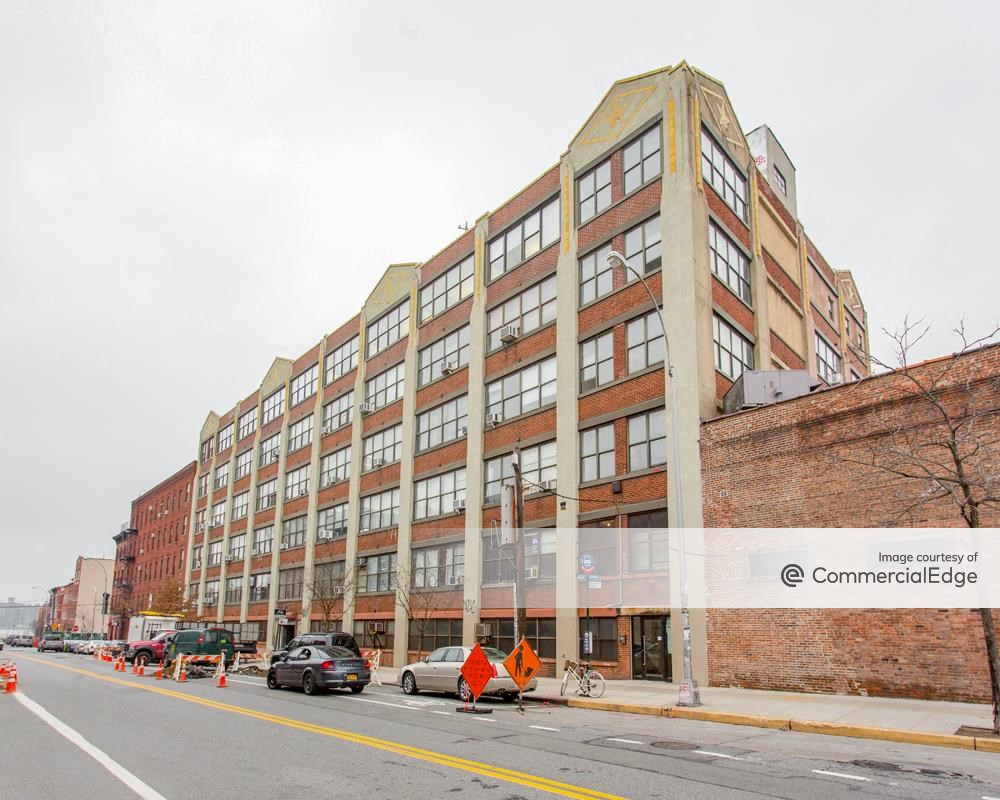 An integral part of the Landmark Preservation Commission’s Eberhard Faber Pencil Company Historic District, the Art Deco-style building at 61 Greenpoint Ave. was built in 1924 and converted to office space in 2007. It was the largest structure in the Greenpoint manufacturing district, as well as Eberhard Faber’s most recognizable building. The structure still features the company’s logo, a star inside a diamond, as well as pencil-shaped decorations adorning the top floor. Current occupants include PencilWorks and AWA Lighting Designers. 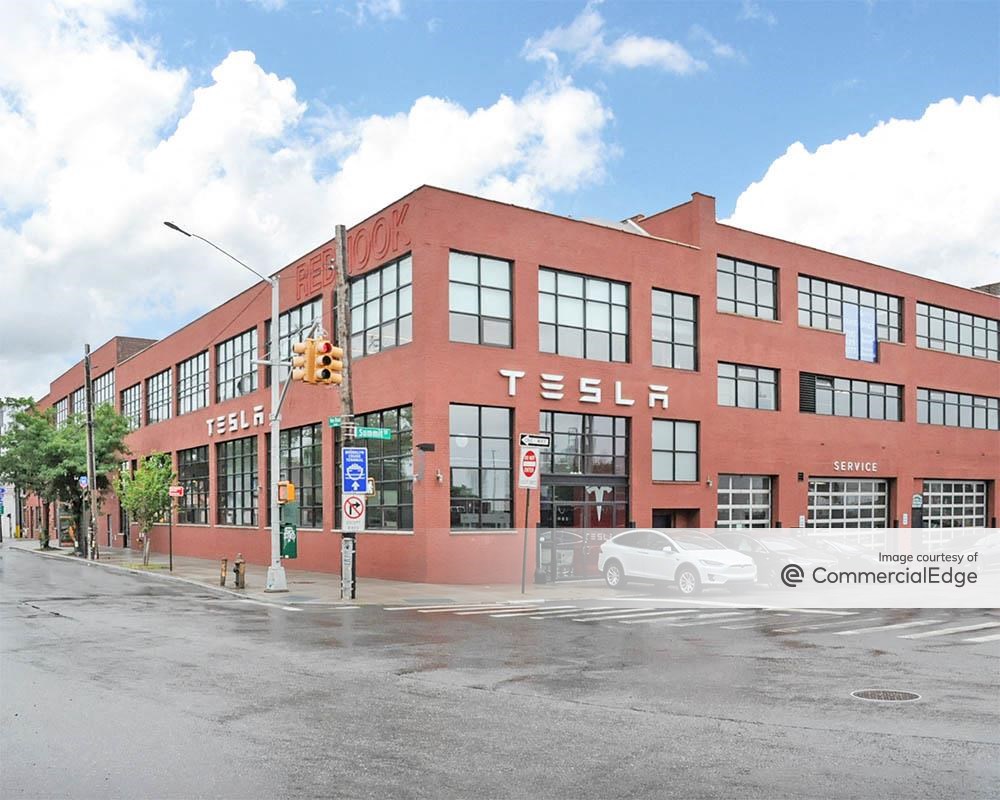 The last property on our list is the former Golten Marine Terminal building at 160 Van Brunt St. in Brooklyn’s Red Hook neighborhood. Originally built in the 1920s, it served as Golten Marine’s ship engine repair shop up until 2014, when LIVWRK acquired the building and started converting it to creative office space. The three-story, 98,650-square-foot, Class A building is now the home of Tesla’s first sales and service center in the borough. The electric car company unveiled its 40,000-square-foot showroom in March 2016.