Amazon’s search for a new home has stirred up city officials and developers across the country, and 238 applicants across North America have expressed interest in housing the company’s next headquarters. Of course, the retail giant has a few requirements: the chosen metropolitan area should ideally house at least 1 million people, an international airport, and a “stable and business-friendly environment.” That seems fair for a juggernaut like Amazon, but what about smaller companies?

We enlisted the help of Yardi Matrix data, alongside other data providers and public sources, to find the best city in which to start up or to relocate your business. We compared U.S. cities with a population of over 100,000, and came up with a list of six major metrics to be taken into account when deciding to relocate. We then awarded each city a specific number of points, based on how that particular city fared for each metric, and also gave bonus points depending on population range (see ‘Methodology’). The overall score was calculated by adding up individual scores obtained for each of the six criteria we considered: the number of graduates with a higher-education degree; job growth in the area; average annual wage; average lease rate for office spaces; mean commute time; and average rent per square foot.

Which is the Best City to Relocate Your Business?

Taking into account the criteria described above, our research shows a clear winner: Phoenix is your best bet if you’re thinking of relocating your business, or even starting a company from scratch. Compared to larger business clusters like New York, Los Angeles or Houston, Phoenix–the ‘Valley of the Sun’–isn’t really a top-tier destination for investment and might not be the most obvious choice for business owners. Yet the city has a lot more to offer than meets the eye.

Home to a diverse economy and a plethora of companies in the real estate, retail, financial services and healthcare sectors, among others, Phoenix’s commercial real estate market is not to be overlooked, whether you’re a small startup firm or a giant like Amazon. Home to Arizona State University, one of the largest universities in the U.S., and housing a handful of Fortune 500 firms, the city offers a wide talent pool and educated workforce. The Phoenix metro in general is becoming more and more appealing to corporations, with firms like Magellan Health, Rogers Corp. and Carlisle Cos. moving their headquarters to the area in recent years, according to Arizona Central. The city is also well-connected, being home to the Sky Harbor International Airport, the largest airport in Arizona and one of the largest commercial airports in the country.

The costs of running a business in Phoenix are also considerably lower than in the primary investment markets. One of the most important metrics–if not the most important–to take into consideration when deciding to relocate your company is the average annual wage. Usually, the higher the salaries in a particular area, the more appealing the relocation will be to employees. If an employee agrees to remain loyal to his employer and move to a different city, a higher salary might be a deciding incentive, and this will also allow the company to retain its employee base and not lose its best people following the move. On the other hand, moving to a market where the average wage is lower would help a company reduce costs, even if it meant losing some workers in the process.

The average annual wage in Phoenix hovers around the $54,800 mark, and the city therefore boasts the 62nd highest average wage out of the 219 cities we included in our analysis. When compared to all the other cities on our list, Phoenix doesn’t strike one as a low-income job market. The average annual wage here is roughly on par with wages earned in Pittsburgh, Pa., Scottsdale, Ariz., Saint Paul, Minn., or Concord, Calif. However, the average annual wage in Phoenix is well below the numbers recorded in expensive California tech hubs like Sunnyvale, San Francisco or San Jose. The average annual wage in Sunnyvale, Calif., is $104,622, while wages in San Francisco reached $86,677, according to Q2 2017 data provided by Payscale. Consequently, the Phoenix market lands in a sweet spot in terms of wages, as it’s not as expensive as other larger markets, yet at the same time, annual wages are above-average, making it an appealing destination for professionals and businesses alike.

Another important metric to factor in when deciding where to relocate your business is the average lease rate for office spaces in the area. No matter what type of business you’re operating, you’ll need a home base, namely an office to serve as your headquarters. The average lease rate per square foot for Class A office buildings in Phoenix was $29 as of October 2017, according to Yardi Matrix data. Class B assets lease out at an average of $19 per square foot, while Class C office buildings boast an average lease rate of $14 per square foot. A total of 693,832 square feet of office space were delivered so far in 2017 in Phoenix, a massive 363% growth year-over-year, a sign that the market is an increasingly attractive target for businesses looking for quality space. Phoenix is also one of the cities in the running to house Amazon’s second headquarters, proposing the site of the Park Central Mall in midtown as a potential location for the retail company’s new home.

Other top contenders on our list include San Antonio, Texas, epicenter of the ‘Texas Triangle;’ Indianapolis, home to Simon Property Group, the largest REIT in the U.S., and three Fortune 500 companies; and Columbus, Ohio, one of Money Magazine’s Best Places to Live in 2016. What also stands out is the fact that Texas cities take 5 spots in the top 20 ranking, showing that The Lone Star State is worth considering if you’re planning to relocate your business. San Antonio is your best choice, followed by Dallas, Fort Worth, Austin and Houston. None of these cities sound appealing to you? We’ve created a tool to help you find the right city for your business needs. Keep reading to see how it works.

After establishing the scoring system and compiling the metrics for each of the 219 cities we included in our research, we were able to create a tool that lets you make your own custom search by adjusting the criteria that matters to you and your company’s needs. What you’ll end up with is a list of all 219 cities ranked according to the custom metrics you’ve selected. Try it out below: 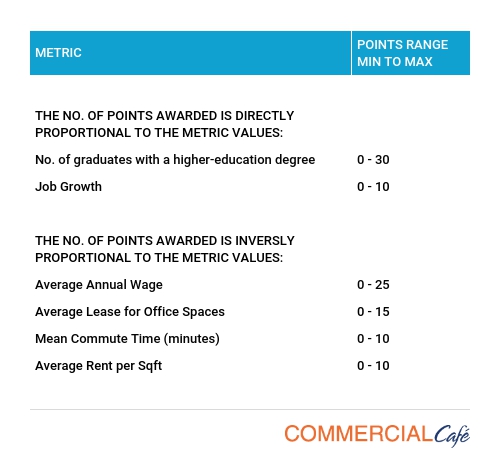 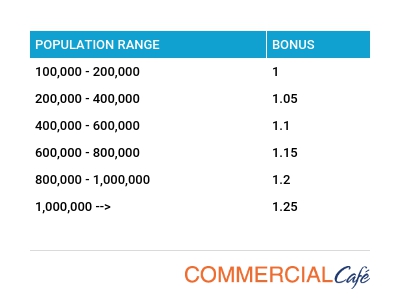 Previous Story:
California Q3 Office Report—Sales Drop Across the Board

Next Story:
10 Years after the Recession, US Office Sales Have Regained Traction