Conveniently located in the downtown Loop, the project is set to add 650,000 square feet of premium office space to the Chicago central business district. It will offer some of the largest floor plates available in the city, ranging from 110,000 to 130,000 square feet. The building’s existing architectural features, including 15- to 28-foot-high ceilings, oversized windows, grand atriums, and 19th Century artistic elements, will help create an ambiance of historical grandeur.

In addition, the building will be fitted with a new entrance and lobby, as well as 14 new elevators, which will transport future employees working here to the top floors. Tenants will have access to a variety of modern amenities, such as a 40,000-square-foot fitness center, a 10,000-square-foot rooftop garden, a lounge, and a conferencing center. 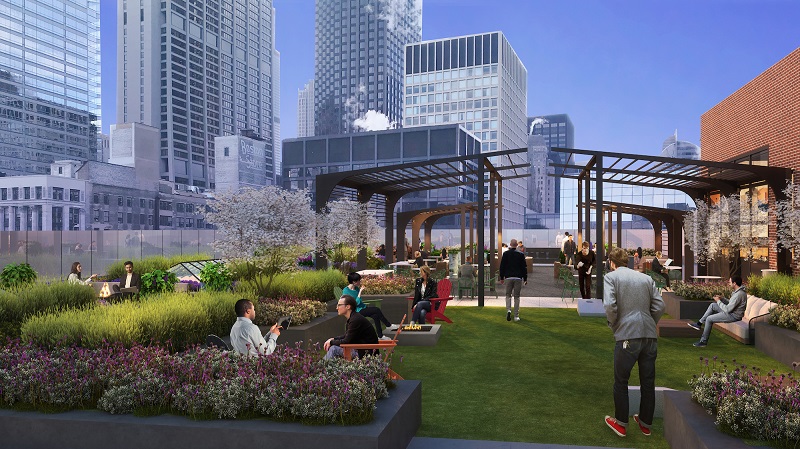 Rendering of the rooftop at Brookfield’s 24 East Washington project

The multi-million-dollar investment also covers upgrades to the infrastructure—heating, air conditioning, and plumbing—as the developers aim for a LEED Silver certification. As far as restoration work is concerned, plans include a window refurbishment program, façade cleaning, and the rehabilitation of entrance canopies and skylights, as well as masonry and terra cotta repairs throughout the building.

Brookfield is partnering with Chicago-based Clayco, Lamar Johnson Collaborative and The Telos Group for the redevelopment and leasing of the property. The project is expected to open in 2020.

“The building’s rich history and deep connection to the city of Chicago make this redevelopment an extremely unique opportunity to create a one-of-a-kind office environment in a building with such a storied past,” said Alex Antolino, Director of Mixed-Use Development for Brookfield Properties.

Designed by D.H. Burnham & Company, the century-old building has been designated a National Historic Landmark and listed on the National Register of Historic Places. The renovations will open the top six floors to the public for the first time. These floors were typically used by Marshall Field’s for making Frango mints, furniture and other products sold in the store, as well as for storing valuable furs.

Brookfield acquired the top six floors of the iconic building at 24 E. Washington from Macy’s in 2018 for $27 million. The retailer has owned the property since 2006 and will continue to operate its flagship store on the building’s first seven floors.

(All renderings courtesy of Brookfield Properties.)