The Chicago office sales market seems to be having a slow year. With just 17 major sales closing in the first half of 2017, and overall dollar volume dropping to its lowest point in five years, the market seems to be going through a rough patch in this particular sector. Moreover, while leasing activity remained strong throughout the first part of the year, ongoing company relocations and downsizing efforts are likely to push the vacancy rate higher and companies will have a rough time selling underused assets.

Despite the obvious slowdown in investment sales volume, there were a number of notable office transactions that made the news this year, and with Chicago being an attractive target for offshore investors, there’s a good chance the market might get through this slump unfazed. We used in-depth Yardi Matrix data to analyze the state of Chicago’s office sales market during the first half of the year, and to round up the largest projects scheduled for delivery by year-end 2017 (see ‘Methodology’).

Just 17 major office deals closed in Chicago during the first six months of 2017, for a little over $1 billion–the lowest mid-year sales volume in the past five years. 2017 is turning out to be a weak time for the Chicago office sales market, with the number of deals, dollar volume and total square footage numbers all dropping significantly. Less than 5.5 million square feet of office space traded in the first half of 2017, compared to the 8.8 million square feet that sold in the first half of 2016. Still, there is a chance that the market will pick up the pace in the second half of the year, as it has done before, with other metrics performing quite well. Rental rates for Chicago office buildings exceeded historic highs in Q2, and leasing activity remained elevated, according to a recent Colliers report.

In terms of dollar volume and number of deals closed, the first half of the year wasn’t exactly a high point for the Chicago office market, yet the average price per square foot has reached its highest number since 2015. After sliding downwards for a couple of years, average prices for large office buildings trading on the market ended the first six months of 2017 at $254 per square foot–4% above the numbers recorded during the previous six-month period. Current average prices are on par with those recorded in the first half of 2015, and the only time prices reached higher was in 2014, when office buildings traded at an average of $279 per square foot. 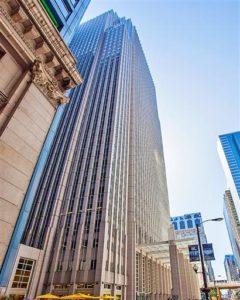 The largest office transaction to close in Chicago over the past six months was the $359 million sale of 181 West Madison St. back in March. China-based HNA Group purchased the 50-story, 952,559-square-foot tower from CBRE Global Investors, with the aid of a $233 million loan held by Metropolitan Life Insurance Co., per Yardi Matrix data. The Class A+, LEED Gold-certified tower located in the Chicago Loop was built in 1990 and includes 7,000 square feet of retail and 2,600 parking spaces.

Bustling Wacker Drive was home to the second- and third-largest office transactions of the past six months. In January, LaSalle Investment Management acquired 123 North Wacker Drive for $147 million, while in May, Ivanhoe Cambridge joined forces with Callahan Capital Properties to buy the asset at 125 South Wacker Drive for $145 million. 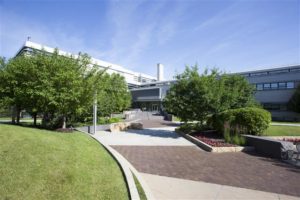 Overall, there were 11 suburban office transactions that closed during the first six months of the year, and only 7 properties to change hands in Chicago proper. The largest asset sold outside the city of Chicago was the Illinois Science and Technology Park in Skokie, Ill. The multi-building biotech campus was acquired by American Landmark Properties in January, for a price tag of $77 million. The portfolio sale included office and lab space at 4901 Searle Pkwy, 8045 Lamon Ave., 8030 Lamon Ave. & 4930 Oakton St. and 8025 Lamon Ave. The sale was also funded by a $73.5 million loan held by Prime Finance Partners.

Seven large office projects were delivered to the Chicago market during the first half of 2017, totaling 3 million square feet. The largest delivery of the past six months was the 1.1 million-square-foot tower at 150 North Riverside Plaza. Developed by Riverside Investment & Development, the 54-story building includes 12,600 square feet of retail and plans to earn LEED Gold certification from the USGBC. The Class A+ tower is also the new home of Hyatt Corp.’s new global headquarters. The hospitality giant first revealed plans in late 2014 to consolidate its 1,000-employee Chicago corporate base under one roof.

The second-largest office project to come online in the first half of the year was Hines Interests’ 1 million-square-foot River Point. Located at 444 West Lake St., the 52-story high-rise is already home to DLA Piper, which occupies 175,000 square feet of office space in the building, according to Yardi Matrix. The property also incorporates 15,000 square feet of retail and is expected to achieve LEED Gold certification.

The second part of 2017 will see five large office projects come online in Chicago, totaling close to 800,000 square feet of space–a rather thin pipeline compared to the first half of the year. The largest development currently underway is Sterling Bay’s Fulton West project in the city’s booming Fulton Market neighborhood. Encompassing nearly 300,000 square feet, the first phase of the project will feature modern office and retail space across nine stories, and is scheduled for completion in late September. Over the last few years, Fulton Market has become a hotspot for tech companies–the area is home to Google’s Midwest headquarters, 1KFulton–with Sterling Bay paving the way and spearheading various projects in the district. The former industrial neighborhood was granted Landmark District status by the city of Chicago in 2015.