Austin turns 180 years young this year. During this time, it has grown from a settlement of fewer than 1,000 residents to one the country’s most vibrant metros. A distinct skyline rose among its hundreds of serene parks, many higher learning institutions, museums and cultural centers, and countless festivals of local, national, and international fame. This installment of our cityscapes series looks at how the Downtown Austin skyline came together. In the video below, we map the chronological completion of buildings that rose 200 feet or taller, starting with the magnificent State Capitol building. Read on to learn more about the city’s history, as well as what developments are currently in the works.

Goddess of Liberty – Queen of the Skyline for 100 Years

Our look back on the rise of the city of moonlight towers begins with its primary administrative building. Completed in 1888, the Texas State Capitol rose 311 feet and the Goddess of Liberty statue atop the building’s dome reigned supreme in the Austin skyline for almost a century. Looking to preserve the visual preeminence of the capitol, in 1931 the city enacted a local ordinance limiting the height of new buildings to a maximum of 200 feet.

During the 1960s, however, the 26-story Westgate Tower rose 261 feet amongst an uproar about the fact that the tower hindered views of the capitol from the West. The mid-century modern development became Austin’s youngest landmark in 2010, when it was added to the National Register of Historic Places and designated a Recorded Texas Historic Landmark two years after that. 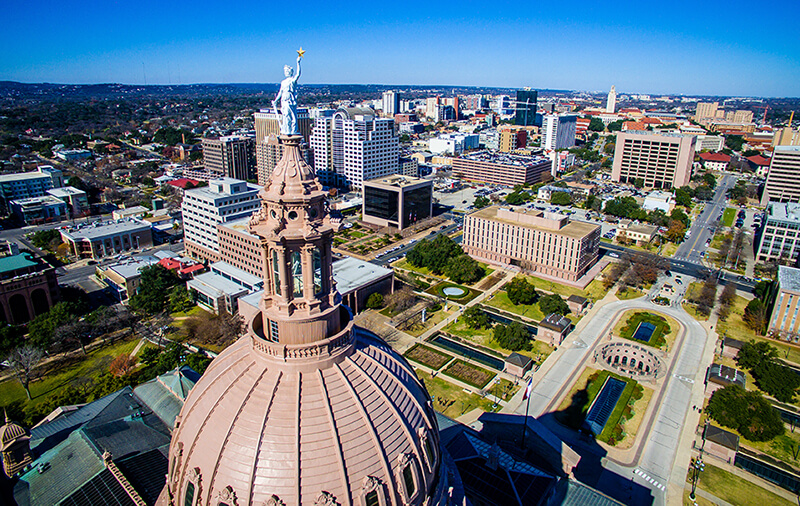 Construction of the tower at 221 West Sixth St. wrapped up in 1974 and produced the first Downtown Austin building to rise taller than the Capitol. In order to showcase this seminal project, developers set up the AmericanScene Observation Room – specially built, carpeted, and air conditioned – from which locals and tourists alike could watch as it unfolded from foundation to its tip. The tower was covered in 3,600 panels of gilded glass, encompassing roughly 170,000 square feet of Austin office space. Although this “Golden Mirror,” which actually contained a small amount of gold alloy, made a big splash in the Austin skyline upon completion, the property got a whole new look just two decades later. The 21-story tower’s glaring coat was stripped and replaced with new colors, and a 40-foot addition decorates the roof of what is now called Chase Bank Tower. 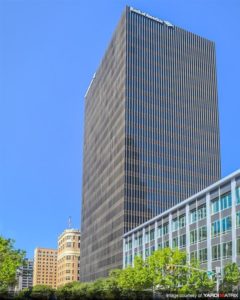 In 1975, Downtown Austin’s newest tallest building was complete. Austin National Bank Tower rose 354 feet above Congress Avenue and retained its tall title for nearly a decade. The building, now known as Bank of America Center, sported a dark, monolithic appearance, a striking contrast to the golden tower located just two blocks away. Designed by local architect S.I. Morris, the tower was commissioned by Houston developer Gerald D. Hines, who had a lot of curtain wall glass panes left over from building Pennzoil Place and saw this as the perfect opportunity to make good use of that surplus.

Congress Avenue drew the developers of some of Austin’s tallest and most recognizable skyscrapers, which filled empty lots or replaced older structures. In 1984, One American Center reached just over 400 feet up and put the Bank of America Center in second place. Now marketed as 600 Congress, the 503,000-square foot One American Center office tower replaced a two-story Art Deco-style Woolworth’s department store.

The 1980s saw America’s most prolific skyscraper building boom, which also made its mark on the Downtown Austin skyline: Capitol Center, the Crown Plaza Austin, 301 Congress, Capitol Tower, the Austin Center, the William P. Clements State Office Building, and One Eleven Congress – Austin’s newest tallest upon completion – were all built in the eighties.

No new high-rises popped up in Downtown Austin during the 1990s, but a new wave swept in with the new millennium. The 328-foot tall office tower at 300 West Sixth Street was completed in 2002 and became the location of Facebook’s first sales and online operations office outside of California, eight years later. At 516 feet, the iconic Frost Bank Tower became Austin’s tallest upon completion in 2004. Arguably one of the city’s few signature towers, the “Owl Building” rivals the State Capitol as Austinites’ favorite, according to a recent local survey. 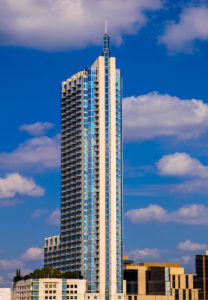 As more and more people were drawn to life in downtown Austin, a flurry of hotels and residential towers filled in more of the skyline: the Hilton Austin, the 360, Spring, the Monarch, the Ashton, Four Seasons Residences, Gables Park Tower, the Bowie, and of course the Austonian – the city’s tallest building for 8 years, and among the tallest residential towers in the entire state. In 2004, the city rezoned downtown’s Rainey Street and officially made it part of the Austin central business district, which ushered in more high-rise development and resulted in the completion of properties such as Windsor on the Lake and SkyHouse.

In 2015, Downtown Austin welcomed its first Class A high-rise office building in 11 years—the Colorado Tower was built by Cousins Properties, an Atlanta-based real estate company that has a long history in Austin. The company’s reputation for high-quality construction made for great leasing success. According to statements made by property representatives at the time, the 30-story tower filled up in no time and 60% of the property was leased by companies that were new in town. Since then, nine other towers taller than 200 feet opened in Downtown Austin, some of which were made possible by city efforts to revitalize underserved areas along Lady Bird Lake, such as redeveloping the Seaholm district.

By next year’s Zilker Kite Festival, the view across the river will already be different from today’s. The Independent (688 feet, 307 residential units), Fifth & West (459 feet, 154 residential units), and 70 Rainey (419 feet, 164 residential units) have topped out and are poised for delivery this year. The cantilevered Independent, nicknamed the “Jenga building,” was reportedly already 60% under contract at the close of 2018. Rising 688 feet above West Avenue, it already overtook the Austonian as the tallest building in town. Although interior work is still underway, the Jenga penthouse is already taken, and, despite local petitions to “fix” the top section, the tower is largely completed. The Hotel ZaZa and Gables Residences complex on Guadalupe Street is also expected to open this year, bringing 159 hotel rooms and 221 apartment units to the city’s vibrant and ever-growing downtown. The Austin Proper luxury project will also contribute 244 hotel rooms and 99 residences.

Third+Shoal is the newest and swankiest office building in Downtown Austin. Turned over to tenants for interior finishes late last year, the 29-story tower is not yet open but is up for sale and developers expect it will fetch upwards of $700 per square foot. Facebook leases 10 floors encompassing roughly 230,000 square feet, and shares the building with Bank of America, national law firm Dickinson Wright, and New York-based investment firm Stonepeak Infrastructure Partners.

The next Austin office skyscrapers to rise downtown are 405 Colorado (due in 2020), Block 71 on West Sixth Street and The Quincy in the Rainey Street district (both planned for delivery in 2021), and the 35-story Block 185 on West Second Street (due 2022). Austin’s particular blend of creative, educational, and technical culture has so far maintained a strong, steady economy, which boasted a notable post-recession recovery, and which will continue to show, in ever taller towers.

For research on buildings to include in this skyline evolution video, we used Yardi Matrix and Skyscrapercenter property data and characteristics information. Our area of focus was the Downtown Austin perimeter, marked by the north bank of the Colorado River, approximately between Lady Bird Lake to the south, North Lamar Boulevard to the west, Martin Luther King Jr. Boulevard to the north, and Interstate 35 to the east. Although future projects are mentioned in this article, the video only includes completed and delivered buildings that are located within the aforementioned boundaries and are at least 200 feet tall. The height was considered to be from base to tip, regardless of material and function of the highest element. No building classes were excluded.

Previous Story:
How to Handle Competition in a Coworking Office

Next Story:
7 Signs Your Property Website Needs An Upgrade