Here Are the Smaller Metros Winning Net Population Through In-Migration

Our recent study on metro-to-metro migration found that the biggest hotspots for population inflow are still mostly concentrated in the Sun Belt. However, simply looking at an overall top 10 list of metros gaining the most net population at the expense of others does not tell the full story, as such a list is predictably skewed toward more sprawling metro areas with larger populations, excluding smaller ones.

While the largest metros in the U.S. see the largest absolute numbers of residents gained, some smaller metro areas have also witnessed considerable growth thanks to a similar set of factors: They offer more affordability compared to local or regional population centers, while also showing great potential for job hunters, commuters and retirees alike. Here are the metro areas with a population of under 1 million residents that gained the most residents from metro-to-metro migration: 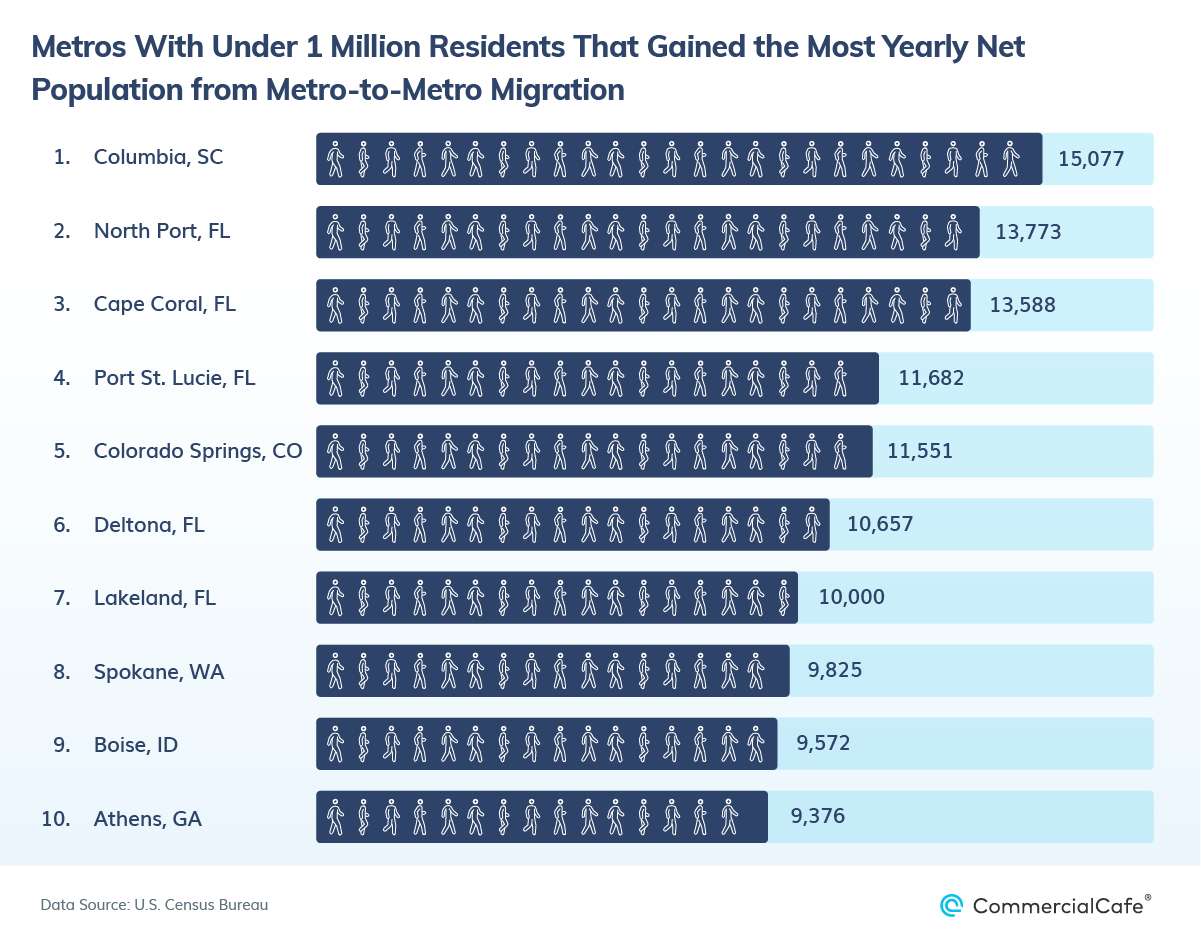 Columbia was first on our list with an average of 15,077 net residents gained yearly from metro-to-metro migration. And, while the metro loses net population in exchanges with Charlotte, N.C., it gains population from other South Carolina metro areas, such as Charleston and Greenville. Here, the yearly net residents gained represent 1.8% of the metro’s population of approximately 830,000 as of 2020.

The capital of South Carolina attracts movers through a variety of means. First, it offers jobs in high-performance industries — such as tech, IT, healthcare, aerospace and advanced manufacturing — for university graduates and job-hunters. However, it also combines the eateries, shopping options and nightlife that are characteristic of larger metros with a small-town feel and a multitude of nature trails. As a result, Columbia is a top-shelf option for prospective residents looking to get the best of both worlds.

Similar to our previous study, Florida dominated the list of the top 10 smaller metros that gained residents through metro-to-metro migration: The state took up half of the list with five entries between #2 and #7.

The highest-ranked Florida metro was North Port, which gained a yearly average of 13,773 residents. While the metro lost residents to some metros in the state, including Orlando and Punta Gorda, the population inflow from Tampa and Miami — besides New Yorkers looking for sunny weather — meant that North Port was our runner-up.

Affordability and popularity as a retirement destination are among the metro’s primary draws for prospective residents, although North Port also features a considerable population of young professionals.

Cape Coral, Fla., made the list at #3 with 13,588 yearly residents gained through in-migration, narrowly surpassed by North Port. Consequently, Cape Coral’s population inflow is similar to North Port’s, as the residents it lost to Tallahassee, Fla., were compensated through the inflow of residents from Miami and New York City.

But, the similarities between Cape Coral and North Port don’t end there. They are both planned communities developed in the 1950s that have gained traction as affordable destinations for movers. In particular, Cape Coral hosts more than 400 miles of navigable canals, providing ample waterfront properties and recreation opportunities.

The smallest Florida metro area on our list with 487,000 residents, Port St. Lucie added 11,682 residents per year — the fourth-highest figure on our list. The yearly influx of residents represents a notable 2.4% compared to the metro’s total population.

Situated about halfway between Orlando and Miami and about an hour north of Palm Beach, Port St. Lucie is experiencing growth in sectors such as healthcare and construction. Simultaneously, the growing finance and government sectors are also driving development in the metro’s downtown.

Sandwiched between the Sunshine State entries was Colorado Springs with 11,551 yearly residents gained, earning it the #5 spot.

The metro is known as a hotspot for hiking in the Rockies — though that is far from its sole attraction. Nature trails and other outdoor recreations are also easily accessible; cost of living is relatively low; and venues are plentiful for a metro of its size.

Back on Florida’s eastern coast, the Deltona-Daytona Beach-Ormond metro made the list with a yearly 10,657 net residents gained from other metros.

The metro comprises several cities with less than 100,000 residents each. The largest city here is Deltona, a planned residential community that has since become the most populous city in Volusia County.

Besides Deltona, a major hub in the metro is Daytona Beach with its robust tourism, industry and manufacturing. Other cities in the area also draw residents thanks to their proximity to Orlando, which is the metro’s primary source of residents.

The final Florida entry on our list is the Lakeland metro, which gained 10,000 residents yearly through in-migration. The metro’s central location in the state, at the halfway point between Tampa and Orlando, is evidenced by the population influx they provide to the city.

Lakeland started out as a railway and farming settlement in the 19th century, and its history can be observed in the city’s most important industries, which include the traditional agriculture, transportation and mining industries. However, in recent times, tourism and healthcare have become increasingly important in the local economy. The diversified economic landscape, coupled with Lakeland’s affordability, ensured the metro’s growth through population inflow from other areas in Florida.

Spokane, Wash., made it to #8 on our list with a net population gain of 9,825 per year as residents primarily move here from other metros in the Northwest.

With considerable investments in fields such as aerospace engineering, health sciences and finance, Spokane’s economic opportunities, relative affordability and small-town feel — coupled with a lively downtown — likely contributed to its popularity.

The only state capital in our top 10, Boise reached 9th place with 9,572 residents gained per year.

Also known as Treasure Valley, the Boise metro area is the state’s most populous with more than 760,000 residents. Boise gains residents from a variety of other metro areas across the West Coast, including Los Angeles; Portland, Ore.; and Riverside, Calif.

Boise features a unique economic background, combining both government employment and jobs created by computer memory maker Micron, which is headquartered in the metro. Its affordability and the characteristic Pacific Northwest nature are also likely draws.

Closing out our list was Athens, Ga., with 9,376 residents gained yearly. The yearly population increase from metro-to-metro migration represents a 4.4% growth compared to Athens’ population of just over 215,000 — the largest percentage growth on our list.

Athens is a cultural and educational hotspot that’s home to the University of Georgia and a vibrant music scene. It also benefits from being a satellite of Atlanta — which also happens to be its primary source of new residents, as Athens gains more than 6,000 residents in net population from exchanges with the state capital.

Lucian is a copywriter for the CommercialCafe team. He has several years of experience as a freelance writer and is eager to learn about all things real estate and marketing. His work has been featured by publications such as The New York Times, Forbes and The Business Journals.