The Chicago commercial real estate market seems to be experiencing a growth spur, at least as far as the office and industrial sectors are concerned. While the first half of 2017 signaled a significant slowdown for the Chicago office market, the final months of the year saw sales activity recover, and that trend continued in the first months of 2018, with both sales volume and average prices rising steadily. The industrial sector was just as busy in Q1, particularly in the suburban markets, and the development pipeline indicates that 2018 will be a fruitful year for industrial development in the Windy City. Both sectors are fueled by high investor appetite and strong leasing activity, and the industrial scene in particular continues to show a lot of promise. Read on to see how Chicago’s office and industrial sectors fared during the first quarter of 2018, and what the market holds in store for the following months.

Following a disappointing first half of 2017, which saw office sales volume drop to the lowest level in five years, sales activity in Chicago started picking up the pace in the second half of the year, and this upward trend continued through Q1 2018. Office sales volume rose 41% year-over-year, ending Q1 with 14 deals closed for a total of $1.3 billion–the second-best Q1 performance in five years. While the numbers are nowhere near the high point recorded in Q1 2015, our data suggests this is not due to investor interest waning, as the market is prone to such fluctuations. Intense leasing activity brought office rents up to $29 per square foot in Q1, while office vacancy dipped 50 basis points to $16.9%, according to NKF research. Industrial-to-office conversions and continued development in buzzing tech submarkets such as Fulton Market will fuel interest in Chicago office space in the coming months. 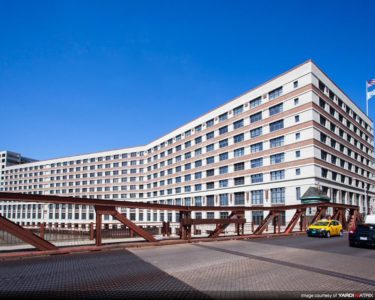 The Windy City office market concluded the first quarter of the year with 14 transactions closed and $1.3 billion in sales volume. The quarterly highlight was the $510 million sale of Groupon’s headquarters at 600 W. Chicago Ave. to Sterling Bay in February. The developer of Fulton West purchased the 1.4 million-square-foot property from Equity Commonwealth, along with the residential properties at 900 N. Kingsbury St. and 758 N. Larrabee St. According to Yardi Matrix data, the sale was funded by a $374 million loan provided by Morgan Stanley.

The former Montgomery Ward warehouse was converted to office space in 2001 following an adaptive reuse effort, and is now fully leased to tenants including Groupon, Freeman, Dyson and Mars. Sterling Bay plans to upgrade the building to meet modern standards, by adding more retail space and revamping the tenant amenities. The sale of the massive Groupon headquarters leaves Sam Zell’s Equity Commonwealth with just one property in Chicago (the Triangle plaza near O’Hare International Airport), and expands Sterling Bay’s footprint in the River North submarket.

When it comes to new office deliveries, the first quarter of 2018 was a slow one. There was only one new office development exceeding 50,000 square feet to come online in Q1–the 202,000-square-foot building at 165 North Aberdeen. Spearheaded by MCZ Development, the 11-story Class A project is part of the bustling West Side Chicago office market, and includes 15,000 square feet of retail and 147,000 square feet of residential space. The building also aims to achieve LEED Silver certification from the USGBC.

The Q2 pipeline promises to be thicker, as 8 projects totaling 2.4 million square feet of office space are scheduled to be delivered to the Chicago market. The largest delivery of the quarter will be the 807,355-square-foot tower at 151 N. Franklin in the city’s central business district. Developed by The John Buck Co., the 35-story high-rise is a spec building that will incorporate office and retail space, and will aim for LEED Gold certification. CNA has already signed up for office space in the building.

Another highlight of Q2 2018 will be the completion of McDonald’s Corporate Headquarters at 110 N. Carpenter St. Featuring 596,000 square feet of space, the West Loop office building is being developed by Sterling Bay at the site of Oprah Winfrey’s former Harpo Studios. Once the project is completed, McDonald’s will move its corporate base from its current headquarters in Oak Brook, Ill., to its new home in downtown Chicago.

The office market in Chicago fared well during the year’s first quarter; however, the busiest sector for the city continues to be the industrial one. Investor appetite is strong and demand for quality industrial assets is high, fueled by the continuous growth of the online retail industry and the growing need for warehouse space to house distribution centers.

The industry is currently undergoing a shift, as the traditional retail mall becomes obsolete and e-commerce continues to rise. Retail giants such as Macy’s, Toys R Us, RadioShack and BCBG have filed for bankruptcy, while online retail juggernauts like Amazon continue to grow in popularity and expand their footprint across the country. In an effort to keep up with demand, fulfillment centers are popping up everywhere, and cities race to host Amazon’s second headquarters–including Chicago. The industrial sector is picking up the pace, trying to keep up with the surging demand, but appetite is high for new space that meets today’s requirements. According to a recent CBRE survey, the average age of a U.S. warehouse is 34 years, and it is unfit to meet today’s standards. Consequently, activity in the industrial sector is surging, especially in the Chicago area, which benefits from a strategic location in the heart of the Midwest.

After reaching a peak in terms of sales activity in Q3 2017, when 21 deals closed for $751 million, the Chicago industrial market started gradually slowing down from quarter to quarter, ending Q1 2018 with 16 deals closed and $475 million in sales volume. The total dollar volume dropped 28% compared to the final quarter of 2017, and was roughly on par with Q1 2017, rising only 2% year-over-year. Historically, industrial sales are slower at the start of the year and tend to accelerate in Q4, as the chart below shows. Consequently, even though the past two quarters marked decreases in sales volume, it’s nothing unusual for the market, and activity is likely to pick up steam in the second half of the year.

In terms of the average price per square foot, Chicago concluded its best first quarter in five years. Q1 2018 ended with industrial buildings trading on the market at an average price of $65 per square foot, marking an 11% rise year-over-year. The market reached its peak in terms of average prices in Q3 2017, when assets changed hands at $94 per square foot, then it slowed down in Q4, when prices went back to the numbers recorded at the start of the year ($58 per square foot). Chicago’s industrial sales market is just as prone to fluctuations as the office market, depending on the demand-supply balance; when supply fails to keep up with the demand, prices go up as investors compete for quality new industrial space. NKF predicts that industrial vacancy in Chicago will go up over the next months as the market gets new supply; however, the industrial sector will remain the market’s best-performing asset class throughout 2018, so prices are likely to continue rising.

There were 16 major industrial deals to close in Chicago during Q1, amassing $475 million in sales volume and 6.9 million square feet traded. The largest transaction of the quarter was a portfolio deal consisting of three industrial buildings located in Aurora, Ill. Equity Office Properties Trust paid JP Morgan Asset Management close to $150 million to buy the 860,248-square-foot asset at 1700 North Edgelawn Drive, the 530,937-square-foot building at 2380 Sullivan Road, and the 301,468-square-foot property at 2303 West Indian Trail.

The Aurora deal comes on the heels of a massive, $1.8 billion industrial transaction closed by Blackstone at the start of the year. The company purchased a 22 million-square-foot portfolio from Cabot Properties, which includes 146 industrial assets located in Chicago, Dallas, Baltimore, Washington, D.C., Los Angeles, South Florida and New Jersey. We excluded this portfolio deal from our analysis, since no individual or market-focused sale prices have been disclosed, so there is no way of knowing the exact price Blackstone paid for the Chicago assets in the portfolio.

The first quarter of the year was much busier on the industrial side than on the office one for the Chicago market. Twelve new industrial projects totaling 3 million square feet were completed during Q1, all of them located in the suburbs. The largest delivery of the quarter was the 676,026-square-foot distribution facility at 175 Southcreek Parkway in Romeoville, Ill., a spec project spearheaded by California-based Panattoni Development. The company first announced its intentions to invest in Chicago’s strong industrial market back in 2015, revealing plans to build more than 2.3 million square feet of warehouse space, without signing any tenants beforehand. The fact that developers are willing to make that bet is a clear sign that the market is thriving and quality industrial space coming on the market will find tenants in no time.

The largest delivery of Q2 is set to be the 1.3 million-square-foot Laraway Crossing Business Park – IKEA Distribution Center. Located at 650 Emerald Drive in Joliet, Ill., the new distribution facility will serve at least 10 stores in the Midwest, including IKEA’s stores in Cincinnati and Columbus, according to Columbus Business First. The Swedish retailer has equipped its new facility with the largest solar roof in the state, and now boasts three of the largest solar rooftop installations in Illinois.

We used detailed Yardi Matrix data to analyze all office and industrial transactions with price tags equal to or exceeding $5 million to close in Chicago during the first quarter of 2018 (January through March). Our analysis, based on data recorded up until April 12th, 2018, includes completed office and industrial buildings equal to or larger than 50,000 square feet that changed owners during the quarter. In the case of mixed-use assets, only properties featuring over 50% office space were taken into account. We counted portfolio deals as single transactions and excluded distressed sales altogether. Some sale prices were calculated based on a tax-transfer formula.

To make sure the trends and comparisons presented in our analysis are valid, we excluded portfolio, partial interest and ground lease deals from our calculation of the average price per square foot.

Next Story:
Expert Insights: The Intricacies of Tempe’s Land-Locked RE Scene