We live in a time when the hustle culture is on the rise, work-life balance is considered a myth and #TGIM is trending on social media. Workplace stress contributes to at least 120,000 deaths each year and accounts for up to $190 billion in health care costs, according to research conducted by Stanford University. Despite this, Millennials are considered lazy and entitled, and those who don’t find their passion, turn it into a job and let it kill them are clearly the losers.

As the issue seems to become more pressing by the minute, we’ve decided to dive deeper into the subject. We conducted a nationwide survey in which we asked 1,992 U.S. employees across generations to look at what work-life balance means to them: how much they work and how satisfied they are with it, what they dream of doing with their free time, and what would help them improve their situation.  Read on to find out what we’ve uncovered.

Despite Apparently Working Less, Younger Generations Are Less Satisfied with Their Work-Life Balance

Lately, research has shown that shortening the work week is bound to increase employee motivation and productivity, having subsequent benefits for employers as well. A Swedish study found that six-hour shifts keep workers happy and energized, while also reducing absenteeism and health care costs. However, it seems that even though the younger generations work less, they tend to be more stressed and less satisfied with their work-life balance.

Still at the beginning of their careers and some working part-time, Gen Z employees spend only 38 hours a week at the office. Millennials are on the clock around 42 hours, while Gen Xers and Baby Boomers have the longest average workweek—43 hours. The younger employees are also less likely to work overtime. Out of our respondents, only 7% of Gen Zers said they work overtime on a daily basis, compared to 16% of Baby Boomers.

Despite apparently working less, roughly a quarter of our Gen Z respondents are dissatisfied with their work-life balance. Millennials have it slightly better, as only 18% are as unhappy. But when compared to the fact that 16% of Gen Xers and only 12% of Boomers felt the same, it becomes clear that the younger the generation is, the bleaker its outlook. Moreover, Gen Zers and Millennials often feel tired in the morning, with 10% and 9% respectively saying that stress accumulated during work hours affects their personal life to a great extent. 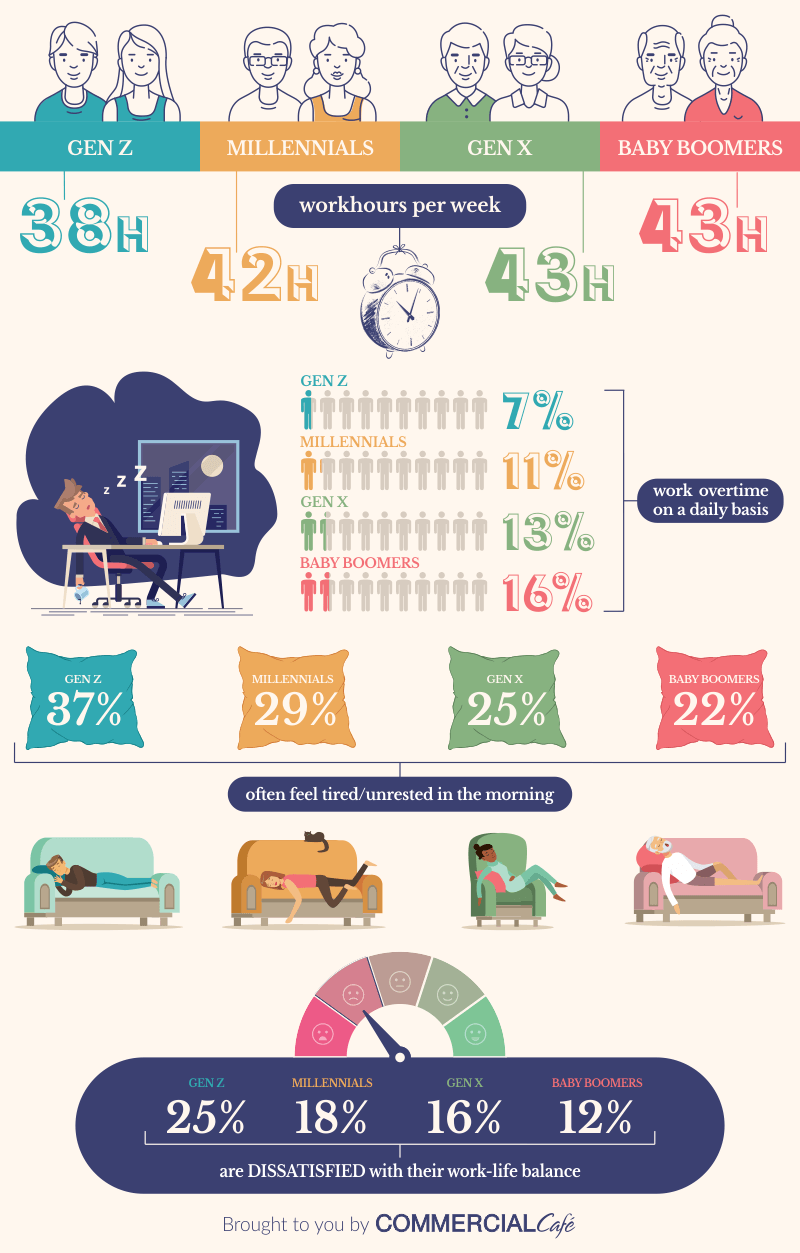 On one hand, the younger employees might feel more pressure to get everything done on time because their workdays are shorter. On the other hand, tech savvy workers have it easier when it comes to staying connected to the office, letting work intrude on their personal life and turning work-life balance into what some call a work-life blend.

This explains why, even though it might appear they work less, Millennials have been called the burnout generation. Taking work home and answering emails in bed leaves them no time to take care of day-to-day errands like laundry or grocery shopping. And even though they are swamped, they show no signs of stopping. “I would like to work more, if possible. I am not satisfied with my work-life balance because I prefer working over personal time, at least at this point in my life,” one Millennial respondent told us.

Moreover, differences in mentality and historical background between generations give way to different views regarding what is expected of employers. These, in turn, influence perceived satisfaction. In a world where finding qualified workforce is becoming increasingly difficult, young employees finally get to make demands. This was not the case with Baby Boomers, who came of age during the post-war population surge, when competition for jobs was fierce. Therefore, it was not surprising when one Boomer told us that “we should be thankful for our jobs and not expect employers to provide extras.”

Digitalization Is Changing the Way We Unwind

Emerging technology is not only changing the way we work but has a great impact on the way we spend leisure time as well. Our survey reiterates this fact, showing that activities such as arts and crafts or reading are losing ground to TV, video games and social media. We asked our respondents to choose at most three activities that help them unwind after a long day at work. Here’s what we found out.

Watching TV or using an online streaming platform like Netflix is the preferred way to de-stress for Gen Z (68%), Millennials (66%) and Gen X (59%). This activity comes in second with Baby Boomers, who would rather go for a relaxing stroll outdoors—59% vs. 50%. Moreover, the older generation still enjoys reading, an activity which did not make the top three for the other cohorts. Gaming proved the second most popular pastime with Millennials and Gen Z, while Gen Xers chose outdoor walks. Not surprisingly, browsing social media rounds up the top three for Gen Z. 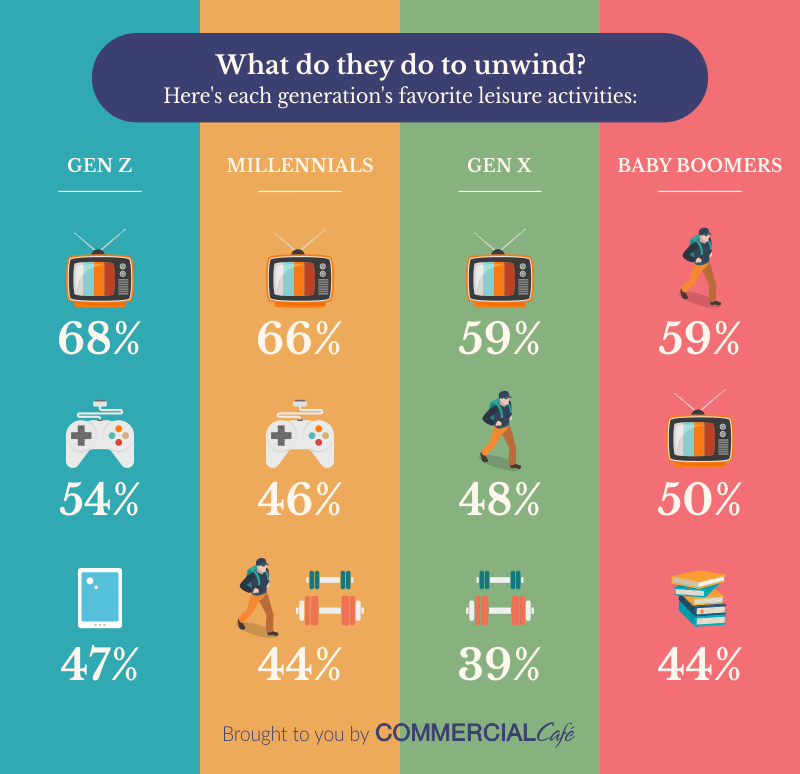 The American Time Use Survey conducted by the Bureau of Labor Statistics further supports our findings. For 2017, the study reports that while 23% of the employed population aged 55 to 64 read for leisure, only 8.5% and 11% of those aged 15-24 and 25-34 respectively did the same. The numbers are reversed when it comes to gaming. Around 24% of the youngest generation was engaged in this activity on an average day, compared to only 7% of those aged 55 to 64.

Office Amenities: What You Need Is Not Always What You Get

The idea that workplace amenities such as on-site gyms and dry-cleaning services can significantly improve one’s quality of life has its supporters as well as its critics. Some complain that these perks are not truly meant to benefit the workers but rather trap them into staying at work longer, further pushing work-life boundaries. Others believe amenities changed the office for the better. Either way, one thing is certain: for now, the amenities that most employers provide are not the ones that the employees need.

When asked which amenities would help them stay active, half of our overall respondents chose on-site gyms and a little under 34% chose standing desks. However, when asked which of these amenities their workplace actually has, only 16% said their office features a gym and roughly 19% said the same about standing desks. In contrast, nearly 18% of our respondents have employers who provide bike racks, yet only 5% opted for these.

The same goes for amenities that help one relax. Nearly half of our respondents would like to enjoy outdoor spaces or rooftop lounges at the office, but only 16% truly can. The difference between those who wish for nap rooms and those who have them is even greater—44% vs. 8%. Even when it comes to natural light, the gap is surprising. Only 36% have natural light in the workplace, even though more than 52% need it. Instead, most of the employees get plants and decorations.

Employers should be more careful when choosing an office for their company if they want to attract and retain the talent they need. In turn, developers and owners should make sure they stay informed about the latest office trends if they want to avoid high vacancy rates. It looks like today’s employees are not indifferent to amenities. Over half of Gen Z and Millennial workers take them into consideration when applying for or accepting a job and around 40% of Gen Xers and Baby Boomers do the same.

Millennials Are, in Fact, Thinking About the Future

The source of quite a bit of concern, Millennials are waiting longer to start a family and are even having fewer babies overall. Besides financial instability or the lack of paid family leave, the work-life balance struggle is one of the top ten concerns Millennials have when it comes to becoming parents. Therefore, it comes as no surprise that those who have taken this big step or are considering it want to improve their work-life balance. Out of our Millennial respondents, roughly 26% want their office to offer on-site daycare and a staggering 53% would take lower pay for more free time.

The situation is somehow similar for Gen Xers, but as their children are getting older, only 15% are still thinking about daycare. Gen Z and Baby Boomers, on the other hand, are not so concerned with parenthood. Less than 10% of our youngest and oldest respondents believe on-site daycare would improve their work-life balance. Also, they are less likely to accept lower pay for more flexibility. 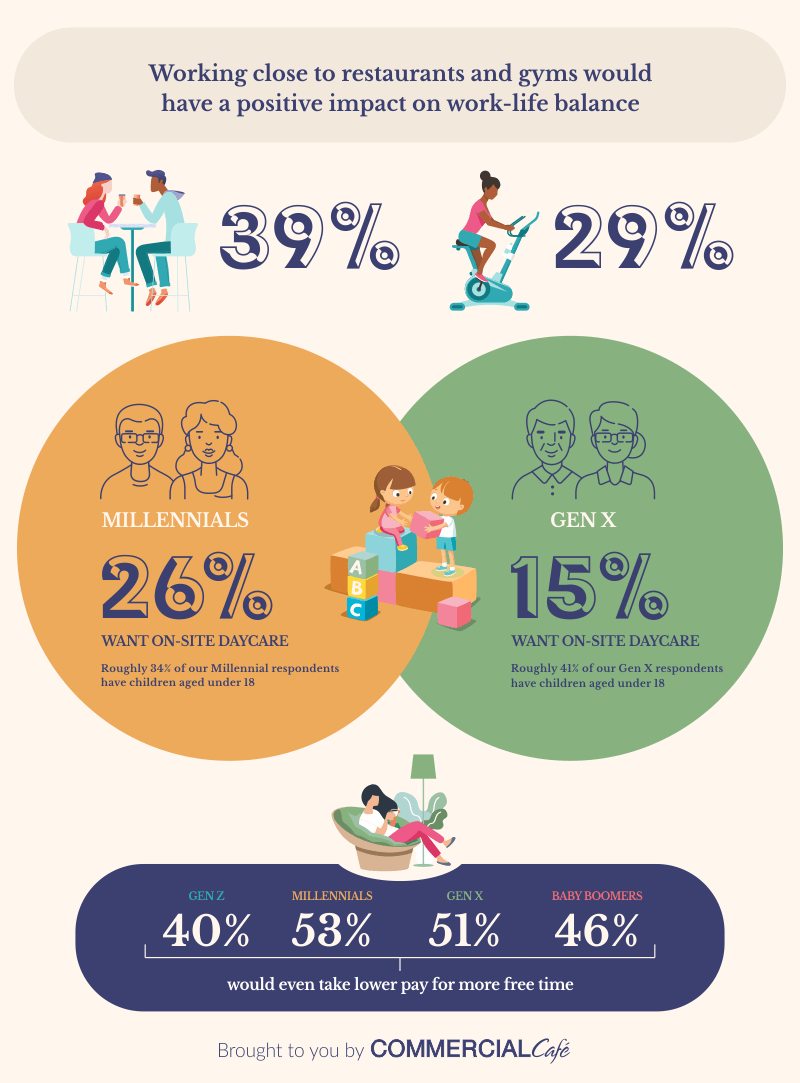 All We Need Is Love

We’ve all daydreamed about what we’d do if we didn’t have to work so much, at least at one point in our lives. Having more free time would mean we’d finally get to take up painting, visit that beach all our friends have been telling us about, and stay true to our New Year’s resolution of going to the gym at least three times a week. But first and foremost, we would catch up on some missed moments with our family and friends. 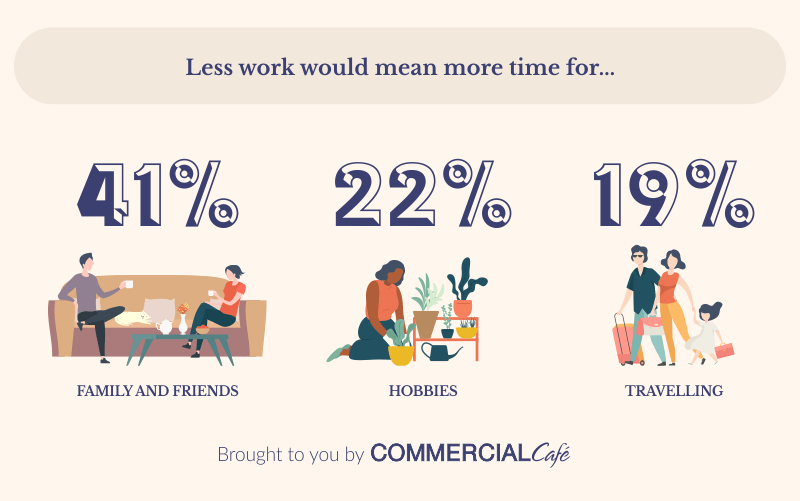 Even though travelling and pursuing hobbies are great ways to spend free time, all generations agreed that if they had more time off, they would first use it to hang out with family and friends. Half of our respondents chose this as their priority, while only around 20% picked the other two options. They proved yet again that good relationships are essential for a happy, healthy life, which is the ultimate goal of maintaining a good work-life balance.

We conducted a nationwide survey of 1,992 respondents, asking them about their work-life balance. We defined the generations as following:

All survey respondents were over the age of 18. Out of the participants, 7.53% were Gen Zers, 54.12% were Millennials, 25.8% were Gen Xers and 12.55% were Baby Boomers. Furthermore, 92.67% of them were employed full-time, while the rest were freelancing, working part-time or project-based.

For creating the survey, we used Amazon’s Mechanical Turk and the survey platform SurveyMonkey. It has a 3% margin of error and a 99% confidence level.

Next Story:
How Your Sleep Patterns Affect Your Productivity