Work from Home Moms Survey: We Asked Women About Their Challenges During COVID-19

COVID-19 has brought about significant shifts in labor patterns and working arrangements — especially for women. Whether they’re working from home, outside the home or have recently become unemployed, women’s ability to juggle multiple tasks – from work, to housekeeping, to childcare and supervision — has been put to the test.

So, between February 25 and March 24, we conducted a survey targeting working or recently unemployed mothers. We asked them about their occupation, the number of children in their care and the influence of the pandemic on their lives. The survey also inquired about any changes in the amount of their domestic and childcare duties; how those changes have influenced their working hours; how much help they receive from other family members; and what they feel would significantly improve their current situation. Additionally, we asked female professionals from various fields — from teachers to CEOs — about their experiences and challenges during the pandemic. 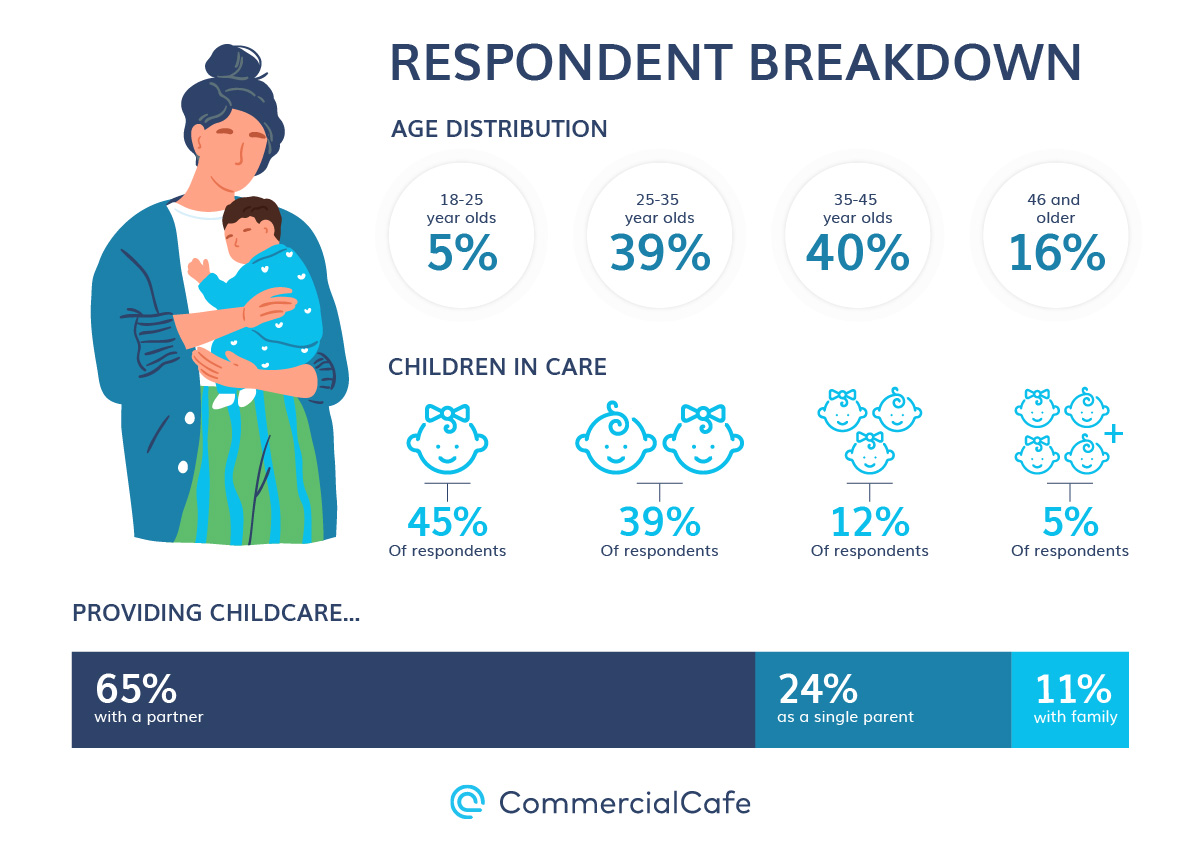 Prior to the pandemic, women represented 46% of workers in the U.S. Similarly, according to a study commissioned by American Express, women-owned businesses made up 42% of all businesses in 2019. However, throughout 2020, women’s positions within the labor market were undermined by the strong disruptive forces set in motion by COVID-19. In fact, estimations made by the McKinsey Global Institute showed that women’s jobs have been 1.8 times more vulnerable than men’s during this period.

And, while 93% of respondents said they maintained their jobs or businesses, approximately 7% reported that they were currently unemployed —  a number that roughly matches the most recent national unemployment average for women in the U.S.

Furthermore, of those who lost their jobs, 62% were either let go or had to permanently or temporarily suspend their business activities due to COVID-19 restrictions. Another 38% decided to leave employment. Notably, while the bulk of these changes in employment occurred following the onset of the pandemic, approximately 30% of women we surveyed had already experienced these shifts before the first lockdowns were even put in place.

I was a partner in a CPA firm and had to leave my career when childcare closed down for an extended period of time. Now, I am finally getting back on my feet again starting a toy company now that school just returned a few weeks ago.

Women working in retail; education; information services; and hotel and food service jobs were hit the hardest. They made up roughly 70% of the share of unemployed respondents. 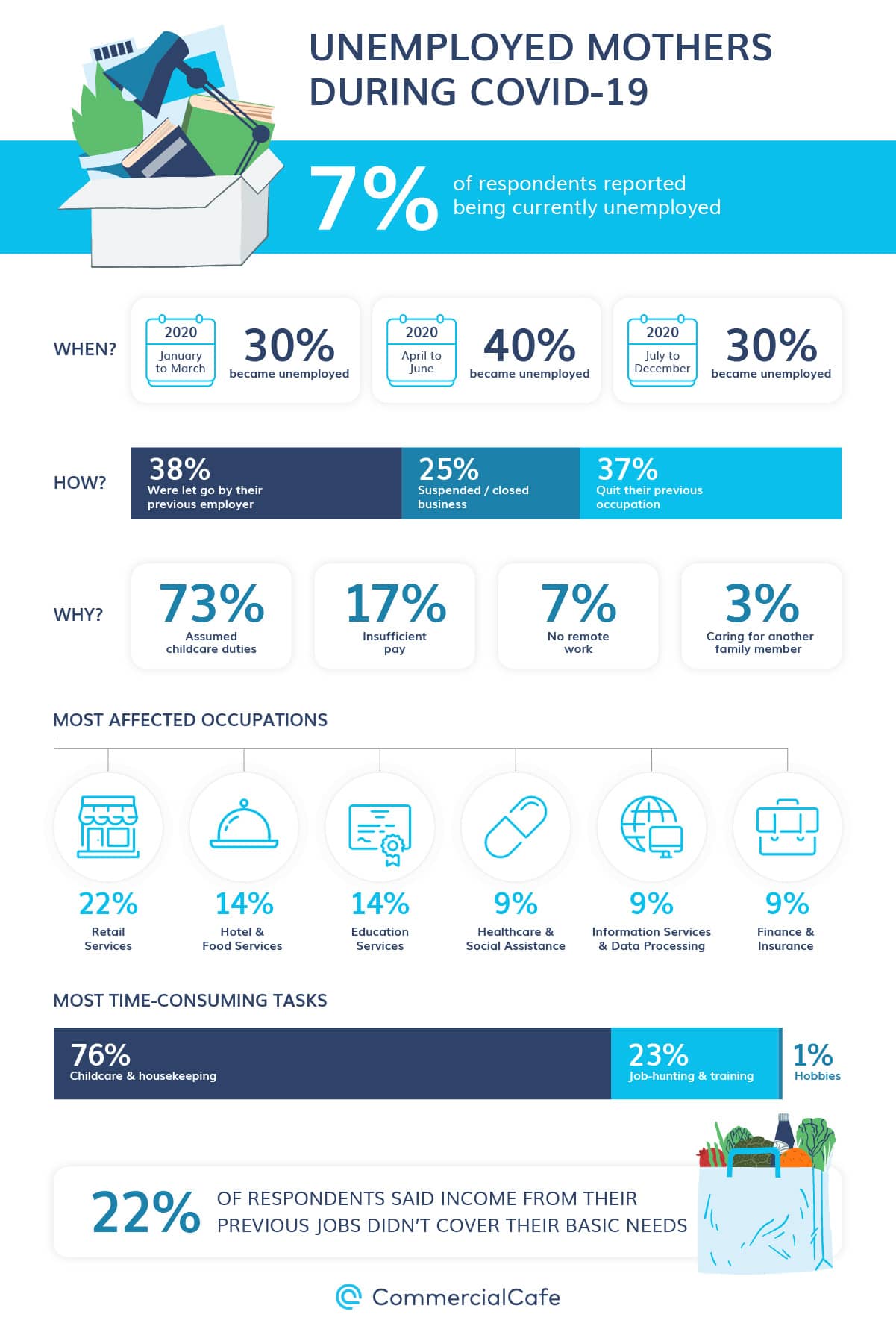 Of the women who were unemployed at the time of the survey, 73% reported the need to assume childcare duties — combined with the limited options to pass along such duties during work hours — as the main reason for their current situation. Meanwhile, insufficient pay prompted 17% of respondents to quit their jobs, with 22% stating that their previous income did not cover their basic household needs. Likewise, 76% of women who were currently out of work said that childcare, supervision and housekeeping were their most time-intensive duties. About 23% reported spending most of their time looking for new work opportunities or engaging in online training courses.

Income Doesn’t Cover Basic Needs for 30% of Working Moms, Many Would Consider a Career Change

Among those who were employed, 90% work either full- or part-time, with the other 10% split between women who own their own ventures and those who work on a per-project basis.

I highly recommend writing out ALL of the house tasks and explicitly dividing them between the household members. There is so much hidden work that women do, and it needs to be seen!

As far as their income, 30% said their current wage failed to cover their basic household needs. Indeed, the majority of respondents fell into lower-paid occupations in the healthcare, education or retail sectors.

For instance, according to the Bureau of Labor Statistics, the mean annual wage of home health aides in 2019 was just $26,330. [Notably, personal care aid is an essential, skill-specific service that is not compatible with remote work and is one of the fasted growing occupations in the U.S. However, more important, certain trends within our societies end up affecting women more — especially during times of crisis. Specifically, women manage a disproportionately larger share of unpaid care work, including childcare, caring for the elderly, cooking and cleaning.

What’s more, a significant share of “pink-collar” jobs — such as home care providers and healthcare support workers — are associated with lower wages. This might explain why 45% of employed respondents said they were considering a career change. Among these, approximately two-thirds were interested in a better-paying job, while 18% would change course for a more flexible schedule and another 18% want to try a different line of work. And, while recent data shows that statewide unemployment numbers have improved significantly since mid-March 2020, the uneven recovery means that women who have access to more dynamic job markets are more likely to exercise their options in this regard.

In terms of preferred work arrangements, one-third of respondents reported that they would like to continue working from home full-time. Along the same lines, 37% said that they thought a flexible schedule would provide the best balance for them — thereby allowing them time with their family, while also providing a professional setting to meet clients and socialize with other professionals. However, there’s also a significant minority (30%) that is eager to get back to the office and work exclusively from there.

I love working at home, so I’ll hopefully maintain that, with the ability to have in person meetings as needed.

Granted, both mothers and fathers are affected by daycares, kindergartens and schools being closed indefinitely or reopened intermittently. But, there’s evidence that working mothers have taken on more of the resulting childcare responsibilities. For example, 45% of respondents said they had been doing more housekeeping and childcare work since the pandemic began. To that end, 53% of employed women reported that childcare and housekeeping required most of their attention. Another 46% reported spending most of their time on work and career development. 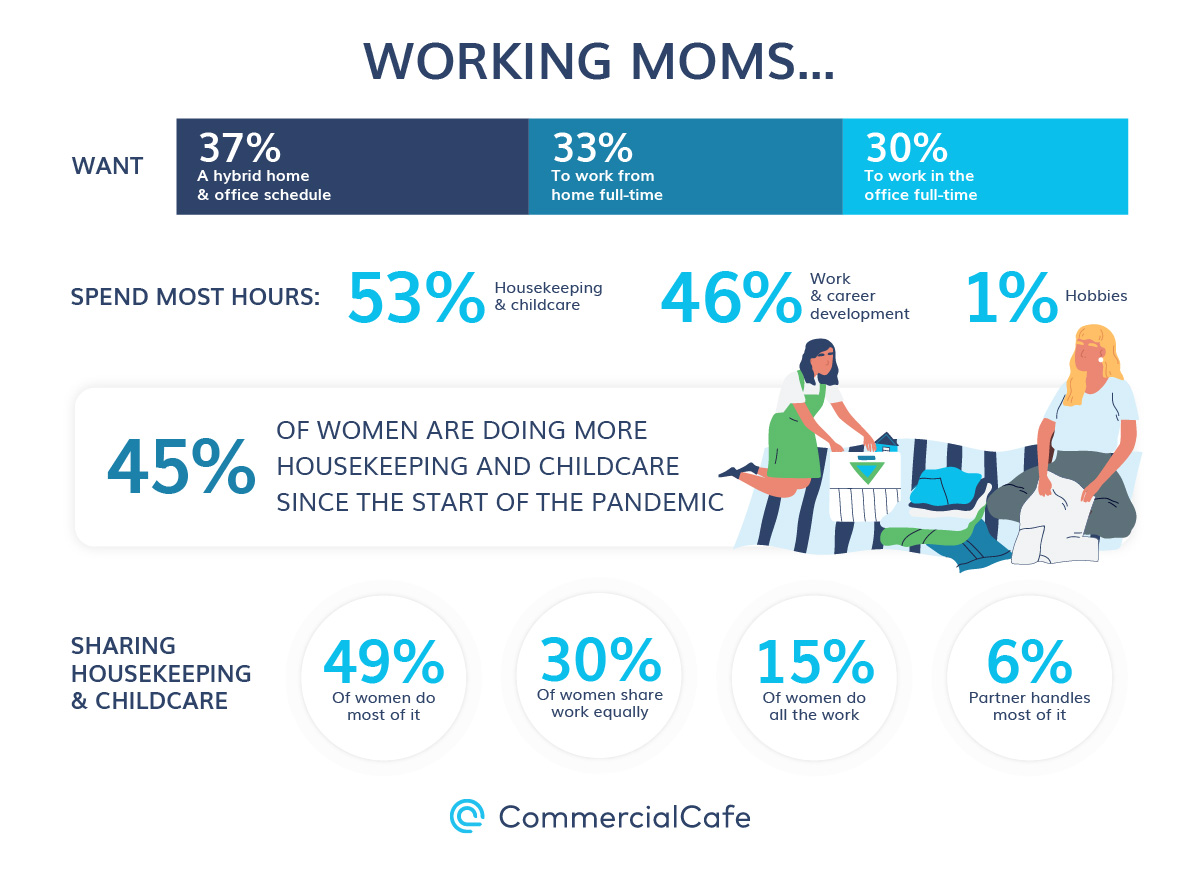 In recent years, there has been discussion within the public sphere about men (or partners of any gender) and the need for them to pitch in more when it comes to domestic duties. Even so, our survey still found that roughly 64% of women were doing all or most of this type of work. Moreover, only 6% said that they felt like their partners had taken it upon themselves to handle childcare and housekeeping, while 30% said that these tasks were split evenly between partners.

Since people began working from home, there have been concerns about the effect that the various distractions in the home would have on worker productivity. Undoubtedly, there are those who have struggled to carry on as usual from home. This may include a range of issues: perching on the kitchen counter due to the lack of a designated space; maintaining a professional image during meetings with kids and pets running around in the background; or simply missing the daily office interactions. Plus, for mothers, these challenges are compounded by their increased domestic workloads.

Working from home is kind of rough in general. But for my family, it was a HUGE transition. My husband always works from home, and he has an office. However, we don’t have space for two people in the office. Plus he is on the phone most of the time anyway-and there isn’t another dedicated space. I spent most days working from the couch or dining room table, which aren’t comfortable when you are trying to work.

While 35% of women reported having no major distractions to their workflow as a result of increased household and childcare duties, roughly one-third said they were having difficulty focusing throughout the day. As an example, to make up for breaks they had to take during their work hours, 17% reported working longer hours, while 13% of respondents had to cut back on their number of work hours due to mounting household and childcare duties.

It impacted my job to a greater extent. I considered leaving my duties several times because I wasn’t able to handle work and home at the same time. It sometimes stresses me out and I suffer from burnout because of housekeeping and childcare burden during work from home.

As far as what would make their life as working moms easier, 47% wished their employers would continue offering flexible work schedules even after schools and kindergartens were open. Likewise, 26% of respondents said that available and affordable childcare options would greatly improve their experience as working mothers (although nearly 4.5 million U.S. daycare slots might be permanently lost due to the pandemic). Another 27% said they’d like to see a more equal distribution of household and child supervision tasks within their family.

I am so looking forward to teachers, school staff, and daycare workers being vaccinated. Between that and grandparents receiving the vaccine having access to safe and thoughtful school, daycare, and childcare would be life changing. We don’t just need schools to be open – we need them to have a plan in place to keep teachers, staff, and students safe! It’s not helpful if they keep closing for two weeks at a time. I think at this point we’re all looking for some consistency and the ability to plan more than a month in advance.

This report is based on a nationwide survey of 1,083 women. It was targeted at working or recently unemployed mothers in an effort to ascertain their changing workloads and schedules during the pandemic, as well as their outlook on what could improve their current situation.

We used Amazon’s Mechanical Turk and the survey platform SurveyMonkey to conduct this survey. It has a 3% margin of error and a 95% confidence level.