18 Women-Led Companies You Need to Check Out in Austin, Texas

According to The 2018 State of Women-Owned Businesses report compiled by American Express, women-led companies thrived in the state of Texas, with Austin ranking third among US metropolitan areas that significantly increased their economic clout in the past ten years (taking into account the number of firms, employment and revenues). Furthermore, the Texan city is in sixth place in a ranking that shows the highest employment vitality (taking into account employment growth rate and average number of employees between 2007 and 2018).

To illustrate the amazing diversity of Austin-based businesses boasting female leaders, we’ve put together a comprehensive list of local firms from all backgrounds, specializations and expertise. Check out 18 women-led companies in Austin that you should definitely keep your eyes on, in alphabetical order:

Founded in 2003 by tech enthusiasts Melissa Simpler and Art Lancaster, Affinegy is a Texas-based company which recognized pretty early on the importance of a secure and reliable WiFi connection. Through their outstanding product called Chariot, they offer a hardware-independent solution for mega-scale connectivity from any types of device. Since the company opened 15 years ago, they’ve managed to expand their business and open two additional offices in Dallas and Wroclaw, Poland, with nearly 50 employees.

Progressive company Astral AR is the brainchild of software developer Leah LaSalla, who after 15 years of working for others launched her own endeavor in 2015. With an extremely diverse team comprising 80% women and made up of veterans, people of color and disabled individuals, this firm has come up with a groundbreaking technology with a noble cause in mind. They produce mind-controlled drones which can recognize firearms and bombs through walls, and have been working directly with police departments, school districts and firefighters.

Launched in 2014 by Monica Landers, a former TV producer and online business builder, Authors.Me aims to revolutionize the publishing world as we know it. The easy-to-use platform brings together literary agents and publishers with writers in a seamless way. By uploading manuscripts and providing additional information about a piece of writing, the online platform then matches them with experts from the publishing industry, thus offering a much easier means of connecting for both parties involved.

With over 20 years of experience in running a reproductive acupuncture clinic, Kirsten Karchmer took a leap of faith and started her own business in 2013 by opening Conceivable.  After encountering couples deemed infertile on a daily basis at her previous job, Kirsten made it her personal mission to come up with a modern fertility wellness program, to improve women’s natural ability to conceive. By encouraging healthy, personalized lifestyle habits, the company has already helped thousands of women previously regarded as infertile to start their own families in a natural way.

DxUpClose is a microbiology and in-vitro diagnostics company founded in 2009 by Cyndi Nickel in Austin, Texas. The firm is set on developing an innovative medical device which aims at helping doctors care more easily for patients suffering from infectious diseases. The point-of-care bacterial diagnostic can perform an antibiotic sensitivity test in no more than an hour.

Faire was founded in 2017 by Sydney Sherman with the mission to change our online shopping habits to being more ethical. Their Internet marketplace works with and promotes only locally-made and ethically-produced merchandise, in an effort to improve the way people buy things online. They also aim to build communities among small businesses in a sustainable and empowering way. 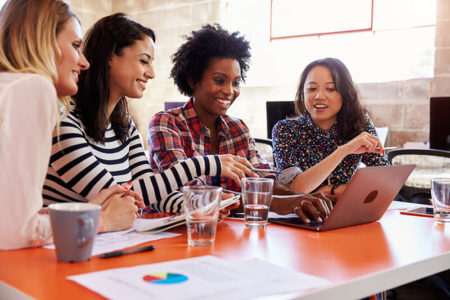 Co-founded by CEO Monica Berrondo and CTO Susana Kaufmann, this women-led company is set on revolutionizing antibody design. Macromoltek was initiated in 2010 with the aim of improving antibody drug development with the use of proprietary algorithms, multidisciplinary skills and validated technology. Their knowledgeable team of scientists and engineers vows to discover quick and effective solutions for countering a diverse set of diseases.

Aileen Passariello-McAleer and Christia Madacsi Hoffman teamed up to found MamaLingua in 2012 after coming to the realization that they had the same passion. They both wanted to teach their children a second language whilst sprucing up their own skills along the way. To this end, they created an app which helps parents and their kids learn Spanish or English together, whilst completing daily routine tasks.

Taking the art of gift-giving to the next level, My World Registry, led by Marilen Rose since the company’s foundation in 2017, wants to revolutionize the way we view and give presents. The online platform aims at providing experiences instead of material stuff, and it has a unique twist. Inspired by crowd founding websites, at My World Registry anyone can contribute with a monetary donation to making a loved one’s dream come true by helping fund their trip, participation at a concert, a food festival, a sport event or any other unique experience.

Launched in 2014 by a handful of quality healthcare enthusiasts, including founder and chief patient experience officer Senem Guney, NarrativeDX has a vast and diverse team of experts. The company’s main goal is to provide optimal patient experience at hospitals. By doing a thorough analysis of patients’ experiences and using groundbreaking AI technology, NarrativeDX helps hospitals improve their services.

Founded in 2010 by Patty Rogers, a marketing entrepreneur with 25 years of experience, Rallyhood is basically a helpful social site with a theme. After her battle with cancer, Patty wanted to build an online platform where the best of social and productivity tools are combined to offer an easy-to-use place where groups of people can connect, communicate and build a better community together. Rallyhood’s open API platform aims at making teamwork easier while working on empowering experiences.

Co-founders Samantha L. Snabes and Matthew Fielder wanted to further improve the 3D printing experience, and launched their company Re:3D in 2013. Together with 20 of their employees and a handful of advisors, they managed to succeed not only in launching, but also in globalizing their futuristic product, the Gigabot. It offers cost-effective, large-scale 3D printing to anyone interested, from engineers and specialty manufacturers to universities and hobbyists alike. Their headquarters is located in Houston and they have two additional offices in Austin and San Juan, Puerto Rico.

The medical device company Spot on Sciences was initiated by Dr. Jeanette Hill in an effort to make remote sample shipment possible for elderly, homebound and disadvantaged patients. Through its two staple products, a blood collection device and a blood separation device, the company basically reinvented the way we can collect blood samples. This not only has the potential to help medical staff or rurally-located individuals, but also offers solutions for other markets, like military field medicine and biobanking.

Testlio was founded by Estonian-born power couple Kristel and Marko Kruustük in 2013 after winning the global AngelHack hackathon. The firm focuses on ensuring quality user experience through their advanced QA platform and their knowledgeable testers, who will recognize the glitches in your product before it reaches customers. With over 50 employees, the company has served high-profile clients like Microsoft, Vimeo, Lyft, Yahoo!, Hotels.com and USA Today, among others.

Led by Laura Bosworth and Lindsay Sulzer, TeVido has definitely innovated 3D printing and reconstructive surgery at the same time. The company, initiated in 2011, is developing solutions to restore skin color that is lost due to diseases, like vitiligo, burns or trauma to the skin, including surgery.

The oldest company of the bunch, TextureMedia was founded by Michelle Breyer and Gretchen Heber, way back in 1998. What started as a discussion group about personal frustrations regarding the lack of cosmetic and beauty products for textured-haired women ended up becoming a flourishing business venture for its two founders. Today, the company influences nearly $5 billion in hair care revenue annually and is one of Austin’s longest-standing women-led companies.

VuTeur is an innovative security company developed by a knowledgeable team of technology and security veterans with over 100 years of experience in data safety. Through their unique product called IRIS (Internal Real-time Intelligence Software) they guarantee protection for any environment, whether that’s a place of business or somebody’s personal home. The company ensures real-time location-based monitoring, two-way communication via a handful of channels, a fully-documented chronological history and exhaustive reporting.

Concluding our list is another inventive Austin-based business venture, founded by Stephanie Boone in 2009. After an incident involving her dog, Stephanie noted the harmful impact chemical-based pet products can have not only on animals but on humans as well, and she decided to do something about it. And so, Wondercide was born in an effort to provide natural and holistic pet care products composed of only organic ingredients, thereby protecting families and animals around the world.

Next Story:
Coworking Offices You Should Consider If You Are a Working Parent in the South

About the Author / Adrienn Takacs

Adrienn is a writer with a background in tourism that includes maintaining her own travel blog, writing for online publications and carrying out social media management for local businesses. She has over 4 years’ experience in writing about residential and commercial real estate trends in the USA and Canada for Point2 and CommercialCafe, and has a particularly strong interest in environmentally friendly home design. Adrienn can be reached at [email protected]