For many years, working from home was a lifestyle choice; now, it’s a necessity. Social distancing and stay-at-home orders forced more and more companies to scale up their telecommuting efforts, or even to allow their employees to fully switch to remote work for the first time. 43% of the US workforce already had a taste of remote working but the pandemic only made the numbers go up.

In the current context, tech workers drew one of the long straws, as many technology companies already had the infrastructure required to accommodate teleworking. The shift towards a work-from-home mindset also meant an uptick in flexibility, since employees were no longer bound to a physical office. They can now work from virtually anywhere, as long as they have access to a computer, the internet, and the company-specific software needed to fulfill their work assignments.

While there are many perks associated with telework and the digital nomad lifestyle, there are challenges as well. Before diving into this way of life, it’s important to know where to start, as some places are better prepared than others to provide the right background for online workers to thrive. A recent STORAGECafé research study pinpointed the US metros that have the best developed sectors for digital working. To do that, 5 key criteria were taken into account:

The study revealed that east and west coast states are better prepared to accommodate digital workers than inland states are. The first three positions are occupied by cities from either California or Washington State, while Massachusetts and Texas take the 4th and 6th positions and the District of Columbia occupies 5th place. 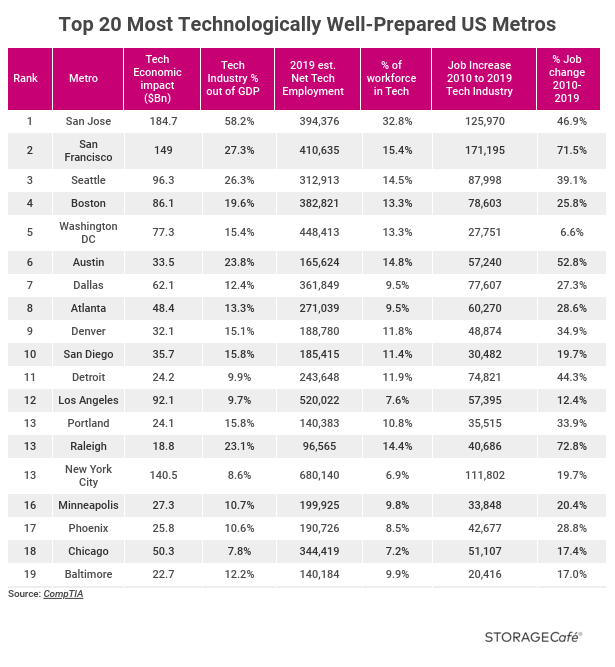 Unsurprisingly, the Capital of Silicon Valley distinguishes itself as the most attractive city for remote workers. Home to companies such as Apple, HP, Google, and Adobe, the City of San Jose, CA, has a thriving tech sector that generates no less than 58% of its GDP, which translates into an economic impact of $184.7B. Additionally, 32.8% of the city’s total workforce is employed in this field, working for one of the countless technology companies headquartered in or around the city. Considering the 46.9% increase in tech jobs over the past 10 years, it is no surprise that San Jose ranks first among the country’s best cities for this sector.

One of Silicon Valley’s top competitors, San Francisco, CA, ranks second on the list of best cities for tech workers. The past 10 years were marked by an impressive 71.5% growth in the number of jobs available in the technology field. Currently, tech companies employ no less than 15.4% of the total number of workers in the city. The strong technology sector centered around the Bay Area not only makes the city highly attractive for job seekers but has a huge impact on San Fran’s economy. The tech industry amounts to 27.3% of the city’s GDP, with its economic impact clocking in at $149B.

The cradle of Microsoft and Amazon, Seattle, WA, is the third-most desirable city for anyone looking to work in tech. Currently, 14.5% of the city’s workforce is employed in this field. This industry in the Emerald City experienced accelerated growth between 2010 and 2019, creating almost 88,000 jobs during that period. Lead by companies like Tableau, Porch, and SAP Concur, the tech sector accounts for 26.3% of the city’s GDP, amounting to an economic impact of $96.3B.

The fourth position switches the focus away from the East Coast to the West Coast. A pioneer in biotechnology and information technology, Boston, MA, puts a strong emphasis on the tech industry. This city is a thriving hub of innovation that has 382,821 workers active in this sector, out of which 78,603 joined the field in the past 10 years. Responsible for the 25.8% increase in technology jobs were relatively recent newcomers like Formlabs, Toast, and Klaviyo, companies that managed to gain a strong market presence in less than 10 years since their founding. Nowadays, the tech industry has a 19.6% share of the city’s GDP, and its economic impact sits at $86.1B.

The capital of the United States is the fifth-most attractive city for tech workers. The sector is on the rise here, too, albeit not as quickly as in some rival cities. The number of new jobs created from 2010 to 2019 accounts for only 6.6% of the city’s tech positions. Even so, tech workers represent 13.3% of the workforce, and the industry contributes 15.4% to the city’s GDP. There is no shortage of technology companies in Washington, DC, notable names including established businesses like Athenium Analytics and innovative newcomers like Zerocycle. As for the economic impact of the tech industry, it clocks in at $77.3B.

The first state to enter the list that is neither in the east nor the west is Texas, represented by Austin, which occupies the sixth position. One of the newest technological hubs in the US, the city has experienced an impressive 52.8% growth in the number of tech jobs available from 2010 onwards. Thanks to this boom, the city is now dubbed Silicon Hills, a tribute to the larger Silicon Valley. Nowadays, 14.8% of the total workforce is employed in companies like Dell, Silicon Labs, and 3M. The industry generates 23.8% of the city’s GDP, while its economic impact sits at $33.5B. The aggressive expansion of the tech industry will likely increase that number in the following years.

The state of Texas managed to have two cities in the top 10, with Dallas distinguishing itself as a tech-oriented city. Companies like Alto, Bestow, and Dialexa helped the city develop its tech sector and become an attractive option for remote workers. A strong 27.3% job growth in this industry generated new opportunities for those looking for a career and boosted the number of tech workers by 77,607. These employees account for 9.5% of the city’s workforce, helping this sector contribute 12.4% to the GDP. The city’s tech sector grows slower than that of Austin, but the economic impact is almost double: $62.1B.

One of Georgia’s main technology hubs, Atlanta is an obvious choice for many southwestern telecommuters, as the city emerges as a hotbed of the tech industry. The eighth-best city for technologically savvy workers, Atlanta has enjoyed a surge in tech job gains over the past 10 years, with a rise of 28.6%. As a result, 9.5% of the workforce is active in the tech sector, working for companies like Secureworks, iMedX and Fiserv. In terms of economic impact, this industry generates $48.4B, contributing 13.3% to the city’s GDP.

The second-to-last position in this list is taken by Denver, CO. This inland city has an up-and-coming tech scene that is quickly developing into an established market. Over the last 10 years, the number of technology jobs available grew 34.9%, leading to a surge in the number of employees working in this industry. Today, this sector is an important contributor to the city’s GDP (15.1%), which helps consolidate the city’s reputation as a top player in the technology field. The nickname of Silicon Mountain is well earned, too, since the tech economic impact sits as $32.1B.

The birthplace of California is also a strong innovation hub. The last city to make this top 10 list, San Diego, CA, has a reputation for attracting startups that have transformed it into a thriving tech center. With 11.4% of the workforce employed in this industry and a job gain of 19.7% during the last 10 years, there’s no doubt that San Diego can compete with the higher-positioned San Jose and San Francisco. Giants like Qualcomm and promising newcomers like Verse.io help the city derive 15.8% of its GDP from the tech industry, while the economic impact clocks in at $35.7B.

Detroit, Portland, and Raleigh, the Next Best Cities for Telecommuters

Apart from the 10 cities listed as best prepared to accommodate tech workers, a few others are worth mentioning. Landing the 11th spot in the ranking, Detroit, MI, has experienced a 44.3% surge in the number of tech jobs created between 2010 and 2019. Portland, OR, is another up-and-coming tech hub; a 33.9% rise in tech jobs earned it the 13th rank. Fighting for the same spot is Raleigh, NC: the newest contender for the coveted title of “tech hub” has experienced a dramatic 72.8% growth in the number of tech jobs available over the last 10 years.

Other Things to Consider When Looking Into Remote Work Opportunities

Some cities might be better than others at accommodating digital workers, but the level of preparedness is not the only factor that should be considered by those looking for a new job opportunity in technology. The availability of self-storage spaces and the average internet speed can play an equally important role.

For those planning to move to a new city, the ease of finding a self storage unit at a decent price point can make the transition smoother. The number of available self-storage facilities depends on how vigorous the market is, with some metros actively investing in new developments. Dallas and Atlanta, for instance, are among the top 5 metros in terms of new self-storage construction, according to a STORAGECafé analysis. They also have the cheapest rates for a standard 10×10 non-climate-controlled unit, compared to the other cities ranked as the best for tech workers. On average, renting a self storage unit in Dallas costs $91, while Atlanta facilities will ask for $92. Austin units are also affordable, as the average street rate is $94. At the opposite end of the spectrum, the most expensive self storage options are in California, with San Francisco, San Jose and San Diego boasting averages of $186, $160, and $153, respectively.

Similarly, the strength of internet connections can impact one’s decision to seek a remote working career in a certain city. From the 10 cities included in the list, only Austin has an average internet speed of over 100 Mbps (111Mbps). The second-best internet speed is in Boston, having an average of 96.4Mbps. Two other cities boast strong internet connections: San Francisco (92.6 Mbps) and San Diego (91.4Mbsp). The rest have slower connections, which might prove an issue for those who rely on the internet to accomplish their tasks.

Tech Hubs, the Engine of the Digital Economy

The share of a city’s GDP derived from the tech economy, the percentage of the workforce employed in tech companies, and the growth of the tech industry over the past 10 years all determine a city’s level of preparedness for the digital economy. The more a city invests in the tech sector, the more attractive it becomes to tech workers, and, subsequently, telecommuters.

San Jose, Washington D.C., Atlanta, Denver, and the other metros included in the top 10 best cities for technologically savvy workers have already established themselves as industry leaders. Others, like Detroit and Raleigh, are on an ascending path and are soon to become equally attractive options. Since remote workers can work from virtually anywhere, as long as they have access to computers and a strong internet connection, these cities can provide better employment opportunities.

Next Story:
The Most Popular U.S. Office Buildings, According to Wikipedia