Buyer appetite for Orange County office assets has been rising steadily over the past four years, reaching its peak in the fourth quarter of 2015, when office sales volume reached $884 million. Home to a plethora of large tech and semiconductor corporations such as Broadcom, Blizzard and Verizon, the Orange County boasts a healthy job market and an unemployment rate of just 3.7% as of February 2017. Consequently, the county presents a more affordable alternative to increasingly expensive markets such as Los Angeles, San Francisco or the Bay Area, for young professionals and office investors alike.

We used Yardi Matrix data to analyze all sales for office buildings larger than 50,000 square feet (see ‘Methodology’ section) to close in Orange County in Q1. We also looked at new office projects scheduled for completion in the second quarter of 2017, using the same data source.

The first quarter of 2017 saw nine office deals of over $5 million close in Orange County, Calif. The total sales volume of $293 million marked the second-best Q1 of the past four years for the Orange County office sales market, and was also three times higher than the volume recorded in the first quarter of 2013. Nonetheless, total dollar volume in Orange County dropped 59% compared to Q4 2016, when 12 transactions closed for $720 million, and was nowhere near the $884 million peak recorded in Q4 2015.

The average price per square foot for office buildings trading in Orange County in the first months of 2017 was roughly on par with the Q1 2013 average, resting at $240. The average price also rose 25% year-over-year, resulting in the highest Q1 level of the past four years for the county’s office sales market. By comparison, the highest price was recorded in the second quarter of 2015, when office buildings traded at an average of $288 per square foot. 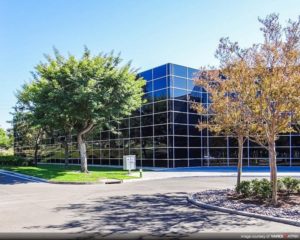 Five out of the nine large office deals of Q1 closed in Irvine, Calif. This should come as no surprise, as the Irvine office market is increasingly appealing to investors, with major corporations and higher education institutions based in the area (top employers in Irvine include the University of California, Irvine, Allergan, Broadcom Corp. and Blizzard Entertainment). Other notable Irvine transactions included MerchSource’s $42 million acquisition of 7755 Irvine Center Drive from Menlo Equities, and Pendulum Property Partners’ $41.6 million purchase of 5 Peters Canyon Road from TIAA.

What’s Next? Projects on Track for Q2 Delivery

Even though there were no office projects over 50,000 square feet to be delivered in the first quarter of 2017 in the county, the market is set to pick up the pace in Q2. Five developments are currently underway and scheduled for completion in the second quarter, encompassing a total of over 1 million square feet. The largest project to come online in Q2 is Trammell Crow’s Boardwalk development at 18691 Jamboree Road in Irvine, Calif. The Class A office campus incorporates two nine-story buildings totaling 550,000 square feet, to be connected through outdoor walkways and indoor bridges. According to the developer, Boardwalk will include 5,000 square feet of restaurant-focused retail space, 2 acres of landscaped open space, as well as on-site conference and training centers.