Though political and economic uncertainty can have a strong impact on U.S. real estate, investor appetite for Los Angeles commercial real estate has not waned in the past year—quite the contrary. Office investment in the region totaled $10.8 billion in 2016, a new peak post-downturn and 67% higher than the previous year’s volume, according to CBRE.

Fourth quarter net absorption topped the 2 million-square-foot mark for the first time since 2005, and an additional 2.2 million square feet of office space are currently underway, according to CBRE data. The Los Angeles County unemployment rate dropped to 4.8% in November, down 100 basis points compared to the previous year, with professional and business services and technology driving job growth in the office sector. Tech tenants have become a main factor fueling demand for new office space in the region, as companies seek alternatives to the over-crowded—and more expensive—Silicon Valley. As a result, L.A.’s office market has made the news quite a lot in the past year, and we’ve gathered up some of the highlights: 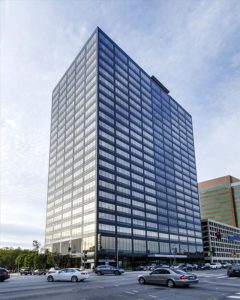 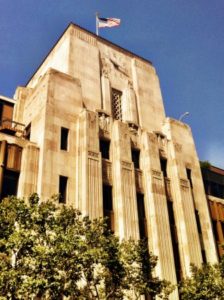 Tribune Media Co. parted ways with a three-property office portfolio in September, for a total price tag of $430 million. The portfolio included Chicago’s Tribune Tower, Times Mirror Square in downtown Los Angeles and The Times printing facility off Olympic Boulevard. According to the Los Angeles Times, the newspaper’s headquarters fetched more than $100 million from Canadian buyer Onni Group. The 750,000-square-foot complex consists of five interconnected structures spanning an entire city block, bordered by Broadway and Spring and 1st and 2nd streets. The new owner reportedly plans to turn the aging structures into a modern, mixed-use development that could revitalize the City Center neighborhood. 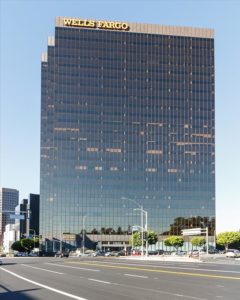 Back in July, Hudson Pacific Properties shelled out $311 million to acquire the 500,475-square-foot Wells Fargo Center at 11601 Wilshire Blvd. from funds managed by The Blackstone Group. The 25-story, Class A office building was completed in 1983 and has served as Hudson Pacific’s corporate headquarters since 2007. The new owner has a renovation plan in store for the building, which was 83 percent occupied at the time of sale, and intends to lease up the remaining space. 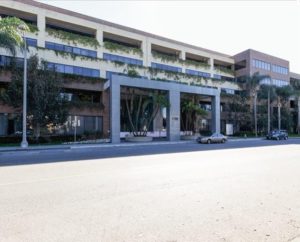 Computer technology giant Oracle reportedly shelled out $368 million to acquire the office building at 2700 Colorado Ave. from Invesco—marking the highest per square foot price in Santa Monica to date. The Real Deal reported in November that the tech company was set to pay $1,165 per square foot for the 316,000-square-foot, five-story building currently home to Lions Gate Entertainment. The campus incorporates first-floor retail space, 1065 parking spaces, above-standard ceiling height and offers major street exposure on 26th Street and Colorado Avenue, according to data from Yardi Matrix. 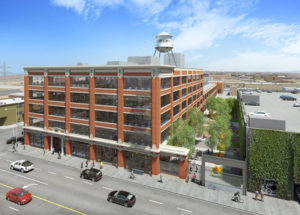 The changing of the leaves also brought a change of location for Warner Music Group. Back in October, the label closed a 13-year, 257,000-square-foot lease within Shorenstein’s Ford Factory at 777 S. Santa Fe Ave.—marking the biggest commercial lease to close in downtown Los Angeles in 2016, according to The Real Deal. The iconic building was originally completed in 1914 as the second Ford Motor plant west of the Mississippi, and is currently undergoing redevelopment. Upon completion, the five-story building will include 40,000 square feet of retail space, 765 parking spaces, and will pursue LEED Gold certification from the USGBC, according to data from Yardi Matrix. 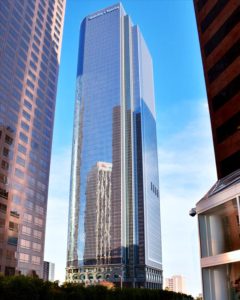 In mid-December, CIM Group landed a major tenant at 2Cal—a 52-story, Class A office building at 350 S. Grand Ave. in downtown L.A.’s Bunker Hill neighborhood. City National Bank signed a long-term lease for eleven floors totaling roughly 300,000 square feet of office space at the LEED Platinum-certified building. The agreement also included signage rights and the rebranding of the property as [email protected] Renovation work at the site will commence in 2017, with occupancy scheduled for 2018. 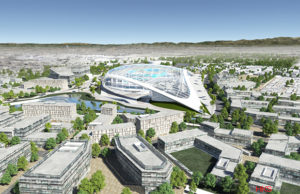 The Los Angeles Rams celebrated the groundbreaking of their $2.66 billion future home in Inglewood in November, marking the first milestone of the City of Champions Revitalization Initiative. According to Hollywood Park Life, the massive 298-acre project is set to include an 80,000-seat stadium for the NFL team, 890,000 square feet of retail, 780,000 square feet of office space, up to 2,500 new residential units, roughly 25 acres of public parks, a hotel of up to 300 guestrooms, and much more. The stadium is scheduled for completion in time for the 2019-2020 NFL season. 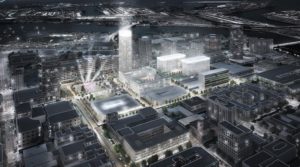 In July, the city and port of Long Beach, together with lead advisor Arup, broke ground on the Long Beach Civic Center—a $520 million mixed-use project set to be the first of its kind in North America. The project calls for the development of a 270,000-square-foot City Hall building, a 240,000-square-foot Port headquarters building, a 92,000-square-foot Main Library and a 3-acre public park, Commercial Property Executive reported at the time. The LBCC project is the first in North America to use the hybrid design-build-finance-operate-maintain concept, with a completion date set for 2019. 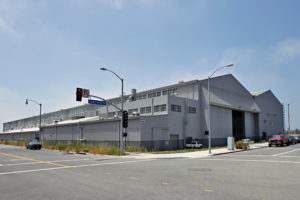 Tech juggernaut Google tripled its Venice office footprint in June, when it leased the entire 319,000-square-foot Spruce Goose hangar at 5865 S. Campus Center Drive in Playa Vista. The space was originally built back in 1943 and was used by Howard Hughes to assemble his Spruce Goose wooden seaplane. According to The Los Angeles Business Journal, the landmark hangar was acquired by Japanese investors in December, from local developer Ratkovich Co. and its partner Penwood Real Estate Investment Management—for close to $270 million. 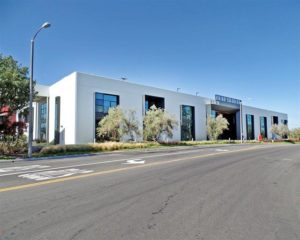 Back in May 2016, Intercontinental Real Estate Corp. paid roughly $600 per square foot to acquire the four-building, 546,833-square-foot Apollo at Rosecrans office campus in El Segundo. The $328 million sale marks one of largest transactions of the year in Southern California, and one of the highest prices per square foot ever in the South Bay market. Carrying the addresses of 2150, 2120, 2121 and 2175 Park Place, Apollo at Rosecrans houses high-profile tenants such as DaVita HealthCare Partners, which signed a 10-year lease for 185,000 square feet of space in 2015. Campus amenities include free Wi-Fi, bike rentals, dog park, food truck space, basketball court, and a 20-minute walking loop.

It’s been quite a busy year for Los Angeles’ office market, with Q4 2016 proving to be the busiest quarter to date in terms of capital markets transactions, according to CBRE. Heading into 2017, investor demand and steady job growth across the board will continue to fuel office development in the metro, so we expect another eventful year for Los Angeles office space for rent.