The Tallest Planned Skyscrapers in the Works

However, the last three decades of skyscraper history were written by Asia. Tower after tower rose in China, eventually eclipsing even the tallest buildings in the U.S. Here, the Petronas Towers, Taipei 101 and the Burj Khalifa succeeded each other to become the world’s tallest office building. But, what will the future of the skyscraper look like and what are the biggest projects we can expect to see completed in the 2020s and beyond? Below, we set out to answer these questions, as well as touch on some essential skyscraper history.

Tallest Planned Skyscrapers in the U.S. Concentrated in NYC

New York City is one of the birthplaces of the skyscraper and features some of the highest concentrations of supertall buildings. Appropriately, New York is also home to the majority of the tallest skyscrapers being planned or under construction in the U.S.:

In fact, NYC is the site of seven of the 10 tallest projects that are proposed or under construction, including the entire top five. The first in terms of height will be the 1,663-foot-tall Affirmation Tower, a planned mixed-use skyscraper in Hudson Yards that will feature diverse tenants, an entertainment complex and a rooftop restaurant. While the Affirmation Tower will surpass the floor height of One World Trade Center, it will intentionally have a lower spire height out of respect for the latter’s history.

Next up is 175 Park Ave. — a mixed-use skyscraper in Midtown East designed by Skidmore, Owings & Merrill — and Tower Fifth, a proposed tower east of Fifth Ave. that would provide nearly 1 million square feet of Class A Manhattan office space.

Meanwhile, the skyscraper with the nearest completion date (and the only one on the list that’s already topped out) is the Brooklyn Tower — a 1,066-foot-tall, mixed-use supertall that’s actually the first skyscraper to be classified as such in Brooklyn.

Also nearing completion is the JPMorgan Chase Building at 270 Park Ave. The building is expected to reach 1,388 feet (423 meters) upon its slated topping out in 2025. Notably, it will house the bank’s global headquarters, just like the Union Carbide Building that was demolished to make room for the new development.

Philadelphia also recorded two entries among the tallest planned skyscrapers in the U.S.: The Transit Terminal Tower at #9 and 3101 Market at #14.

Outside of the Big Apple, Chicago, Seattle and Los Angeles are represented by one entry each on the list of tallest buildings being planned in the U.S. To that end, standing at 1,422 feet, The Tribune East Tower will become the Windy City’s second-tallest skyscraper after the Willis (Sears) Tower following its plan’s final approval from the city in 2020. Similarly, Seattle’s 701 Fourth Ave. is earlier in the planning stages, but it would also become the tallest building in the city. Further down the West Coast, 333 South Figueroa (also known as the LA Grand Hotel) is a proposed supertall residential tower in Los Angeles’ Bunker Hill that would become the tallest building in the LA skyline.

Finally, the list of the 20 tallest proposed U.S. buildings — which includes 22 entries due to ties — was closed out by four Miami entries, all of which will hover around the 1,050-foot mark. The tallest of these will be the Hyatt Regency Miami Tower 3, which will be the tallest of an approved, three-tower development dubbed the Miami Riverbridge.

International skyscraper construction has produced some of the most innovative towers that also stand out due to their sheer height. For instance, since 2010, the title of the tallest building in the world has been held by the Burj Khalifa in Dubai — although that may change if the Jeddah Tower is brought to completion.

Under construction since 2013, the Jeddah Tower will stand at an unrivaled 3,281 feet tall (1,000 meters). Initially slated for a 2020 opening, construction was halted in 2018 with about one-third of the tower completed. Progress had not yet resumed as of publication.

With that, the Burj Khalifa’s status as the tallest building in the world is secure for now, considering that none of other supertalls planned or under construction across the world are slated to surpass it in height. Notably, Malaysia’s Merdeka 118 neared completion at the end of 2022, reportedly being topped out already. With its 418-foot-tall (127-meter) spire, the Merdeka will stand at 2,228 feet (679 meters) tall. That’s enough to nab the title of second-tallest in the world, but not enough to displace the Burj Khalifa.

Additionally, it should be noted that, with its 1,663-foot planned height, the Affirmation Tower would still be more than 300 feet shorter than the 10th-tallest proposed skyscraper at a global level (the Tradewinds Square Tower A in Kuala Lumpur, Malaysia). This is a continuation of trends that were first identified in the 1990s as skyscraper development gradually transitioned to other markets in Asia.

Along the same lines, China is home to two of the tallest skyscrapers currently being planned — the Shenzhen Tower and the Changchun World Trade Center — in addition to being the location of five of the 10 tallest skyscrapers in the world right now. However, a significant change in Chinese skyscraper legislation may push state-of-the-art skyscraper developments even further toward its two other contemporary hotspots: the Middle East and Southeast Asia.

That’s because, last year, legislation barring any supertalls higher than 500 meters (1,640 feet) went into effect in China. As a result, the two proposed skyscrapers in Shenzhen and Changchun may end in the planning stages. The new legislation also more heavily regulates buildings taller than 150 meters (490 feet) and outright bans any skyscrapers taller than 250 meters (820 feet) from being built in cities with populations of less than 3 million residents. So, although China is currently home to half of the 10 tallest skyscrapers on Earth, the path is open for other regions to take center stage.

To that end, five of the 10 tallest skyscrapers that have been proposed or are under construction are in Southeast Asia, with three in Malaysia, one in Thailand and one in Indonesia. The region has also been a hotbed of innovative construction with the Petronas Towers as a significant achievement. And, more developments could be added to that list should proposals reach approval and completion.

Not to be outdone, the Middle East also claimed two other planned supertall skyscraper developments among the world’s tallest (besides the Jeddah Tower), both of which would be in Dubai.

How We Got Here: A Century of Skyscraper Construction

While Asia has been the hallmark of recent supertall development, the skyscraper as a concept was born in the U.S. As such, the vast majority of the world’s tallest office buildings were concentrated here for most of its history. And, although what we define as skyscrapers today existed as early as the 1880s, two eras encapsulate U.S. skyscraper construction: the Roaring Twenties and their echoes into the 30s, as well as the post-war skyscraper boom.

Completed in 1913, the Woolworth Building towered above the Lower Manhattan skyline at 792 feet. But, it alone would not satisfy the demand for office space for rent in New York City in the Roaring Twenties. Spurred by favorable economic conditions at the time, the city soon added several other tall office buildings, including the Barclay-Vesey Building, the New York Life Building, the Chanin Building, and the Mercantile Building.

By the end of the decade, architects and former business partners William Van Alen and H. Craig Severance were engaged in a famous race to build the tallest skyscraper in the world: Van Alen was working with Walter P. Chrysler on the Chrysler Building. At the same time, Severance was commissioned to build the Bank of the Manhattan Company Building, a state-of-the-art office tower at 40 Wall St. Eventually, the Chrysler Building came out on top, becoming the tallest building in the world at 1,046 feet in 1929, thanks to its 185-foot spire. 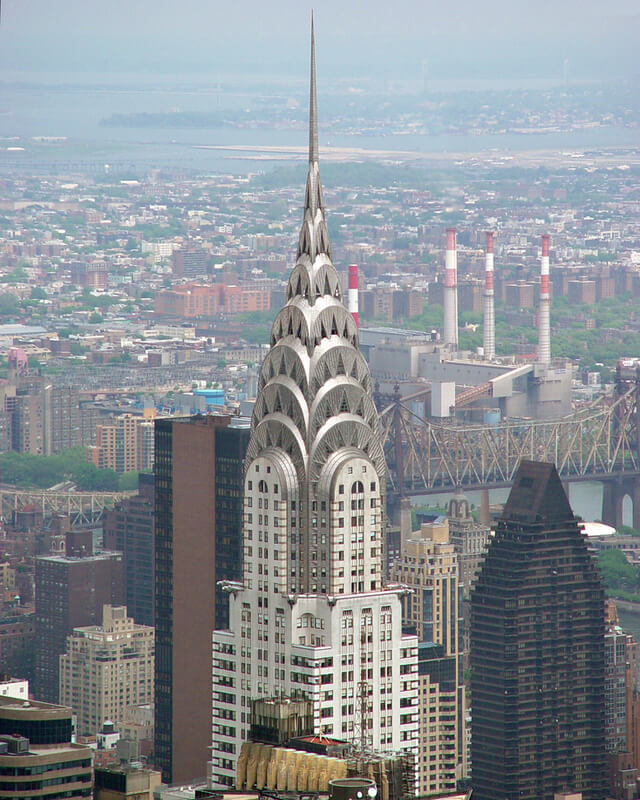 The Chrysler Building – Its shiny crown is made of Nirosta steel, a chromium and nickel alloy which doesn’t rust

However, just 11 months later, the Empire State Building opened to the public on May 1, 1931, after taking only one year and 45 days to build. It rose to 1,250 feet, with its spire alone at 200 feet. Despite being built during the Great Depression, the Empire State Building quickly became an American icon, holding the title of the tallest building in the world for 41 years. 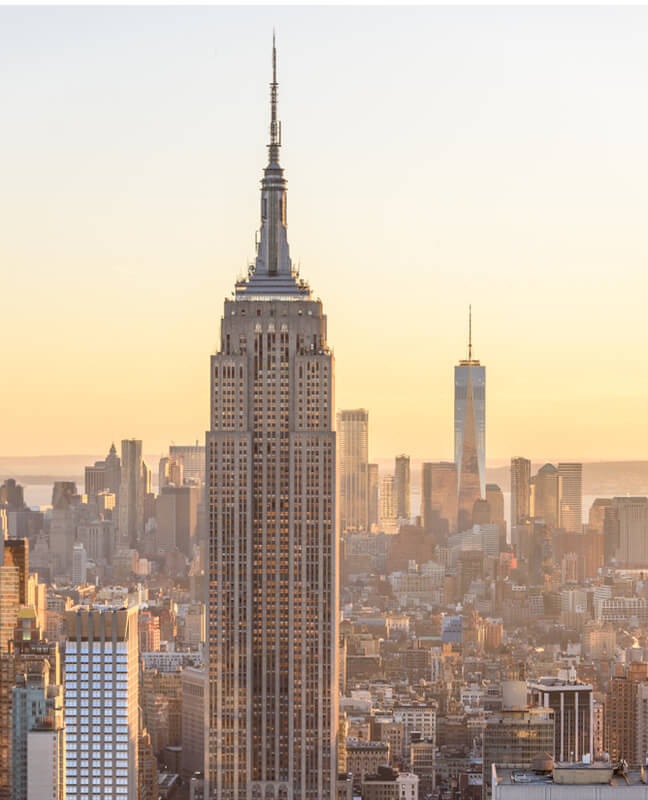 Later, four other new towers joined the New York City skyline and the world’s top 10 tallest buildings list in the 1930s. But, when World War II began, skyscraper construction came to a halt. However, in the post-war economic boom, skyscrapers would rise again taller than ever before.

Aside from a few European entries, the U.S. was still the epicenter of skyscraper construction after the Second World War. Supertall developments in this period included the MetLife (PanAm) Building in NYC; the U.S. Steel Tower in Pittsburgh; the Transamerica Pyramid in San Francisco; the Aon Center in Los Angeles; the JP Morgan Chase Tower in Houston; and the John Hancock Center and Sears Tower in Chicago.

With the construction of the Sears Tower in 1974, Chicago now had the tallest building in the world. The tower was built for Sears Roebuck & Co. by none other than architect Bruce Graham and structural engineer Fazlur Khan — the Skidmore, Owings & Merrill team that created the 1,128-foot John Hancock Center. Rising to 1,451 feet, the Sears Tower would be the last American skyscraper to hold the crown. 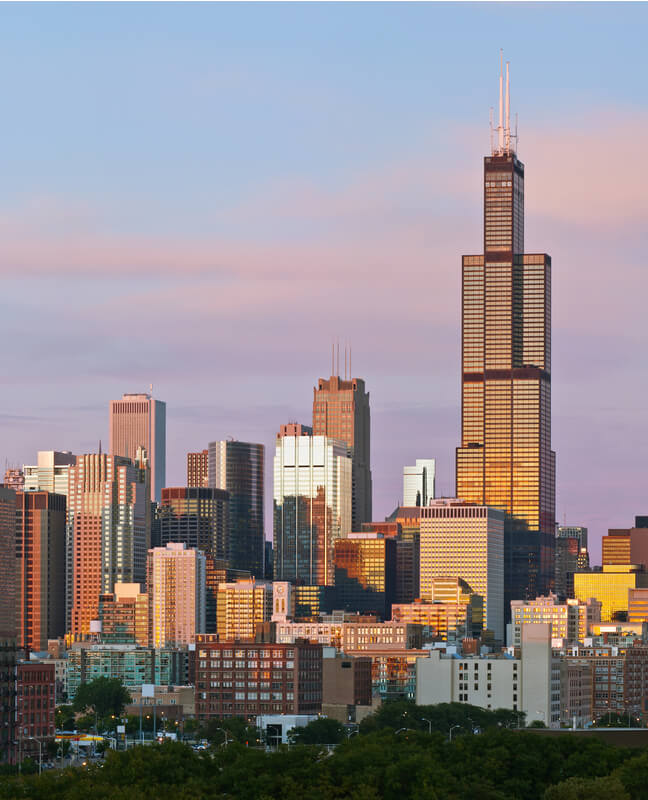 The Sears Tower – Though it officially changed its name to “Willis Tower” in 2009, “Sears Tower” is still the preferred name for the building

After the end of this second surge, it was Asia’s turn to step into the limelight. By 1999, seven of the world’s 10 tallest buildings were located in Asia, including the Petronas Twin Towers in Kuala Lumpur (#1), the Jin Mao Tower in Shanghai (#3), the CITIC Plaza in Guangzhou (#4) and the Shun Hing Square in Shenzen (#5). 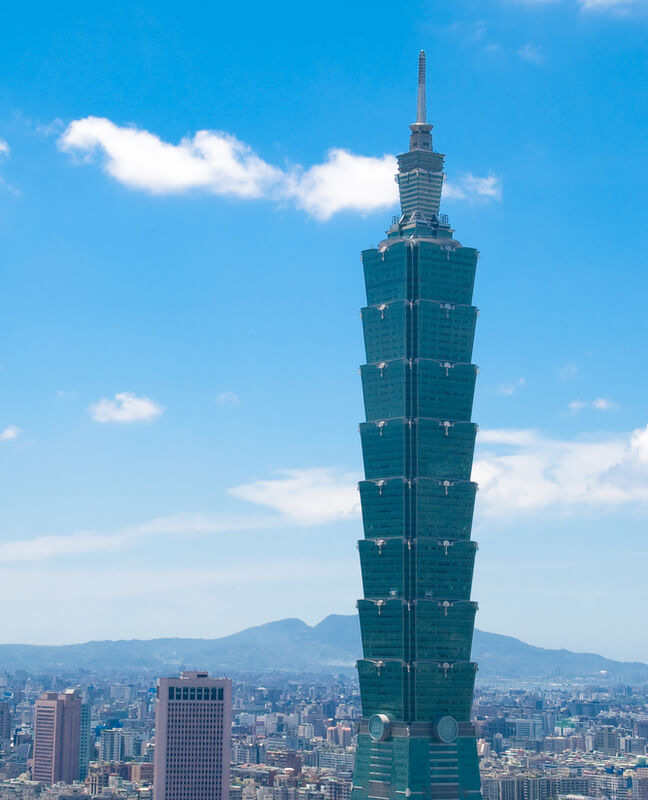 However, all of these amazing skyscrapers would be dwarfed in 2010, when the 2,717-foot Burj Khalifa was officially completed. The glamorous tower is undefeated even today: The only other skyscraper to surpass the 2,000-foot mark is the 2,073-foot Shanghai Tower built in 2015. Moreover, in addition to being the tallest building on the planet, the Burj Khalifa also holds several other records, as well, including the highest outdoor observation deck; the tallest free-standing structure; the highest occupied floor; the highest number of stories; and the elevator with the longest travel distance. 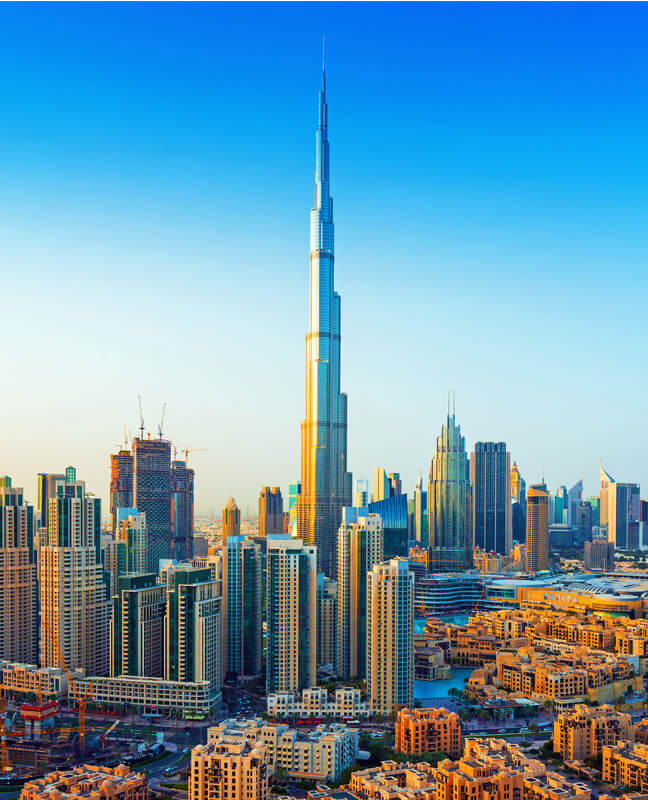 With only the Jeddah Tower slated to surpass the Burj Khalifa, the projected tallest developments of the 2020s are a continuation of the Southeast Asian and Middle Eastern takeover of the list of tallest skyscrapers in the world.

For the list of tallest skyscrapers to be built in the near future, we looked at all projects being planned or currently under construction in the U.S. and worldwide. Project status, scheduled completion date (if applicable), and estimated height were provided by the Council on Tall Buildings and Urban Habitat (CTBUH) through its SkyscraperCenter.com resources.

The historic ranking includes only occupiable buildings that still exist today and are ranked by their official height, as recorded by the CTBUH based on their completion date. By CTBUH’s definition, “completed” refers to buildings that are topped out structurally and architecturally; fully clad; and open for business, or at least partially occupiable.