The Evolution of Downtown LA – A Visual Timeline

Earlier this year, Los Angeles marked the topping out of the Wilshire Grand Center, the tallest building in California and the first high-rise in the city in a long while to not feature a flat roof design. In light of the city reaching this significant milestone, we thought it’d be a good time to look back on how the Los Angeles skyline evolved through the years, from its very first skyscraper to its latest.

Watch the video below, where we present a visual timeline of downtown L.A.’s evolution, and read on to learn more about each decade and the buildings that defined them.

Find all the buildings featured in the video on the map below:

Before the focus of real estate investors and developers shifted westward, toward the now highly sought-after Wilshire corridor, development was concentrated in the Historic Core, the heart of the city before World War II. The tallest buildings erected during Los Angeles’ golden age couldn’t reach higher than 150 feet, a height restriction implemented soon after the completion of the Braly Building in 1903—the city’s first high-rise building and the tallest until 1907. For the next 21 years, the tallest buildings in the city were just 13 or 14 stories high, until the completion of the Los Angeles City Hall in 1928. Considered to be L.A.’s very first skyscraper, the 453-foot-tall City Hall is the tallest base-isolated structure in the world, and held the title of the city’s tallest building for 36 years. The landmark property was featured in a plethora of Hollywood productions, including Perry Mason, War of the Worlds, LA Confidential and the more-recent Gangster Squad. The building was also partly designed by American architect and engineer Albert C. Martin, Sr., founder of A.C. Martin Partners. The renowned architecture firm is responsible for the design of some of Los Angeles’ most recognizable towers, including City National Plaza, Union Bank Plaza, Bank of America Plaza, Figueroa Tower and the recently topped-out Wilshire Grand Center — the tallest building west of the Mississippi. 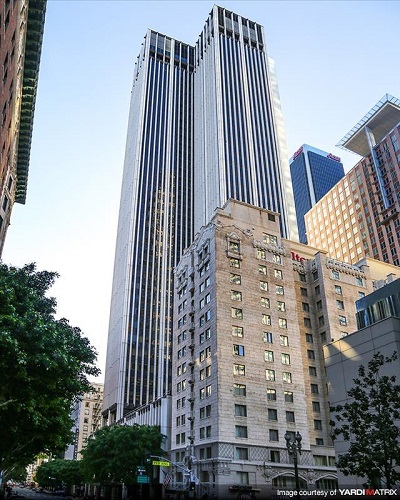 In 1964, height restrictions in the city were removed, allowing developers to experiment and buildings to expand vertically on the increasingly crowded downtown scene. Construction took off and headed west, marking the birth of the rivalry between the historic downtown and Westside Los Angeles. The 40-story Union Bank Plaza was completed in 1967 as part of the controversial Bunker Hill redevelopment project. Back in 1955, the former residential neighborhood was flattened to make room for tall new skyscrapers, resulting in the longest redevelopment initiative in the history of Los Angeles. The construction frenzy finally came to a stop in the late 1990s, when vacancy rates reached record highs and many planned projects were scratched. Notable projects delivered during the 1960s include One Wilshire, designed by Skidmore, Owings & Merrill, and 611 Place, designed by William Pereira & Associates and featured in movies like The Day After Tomorrow and Con Air. 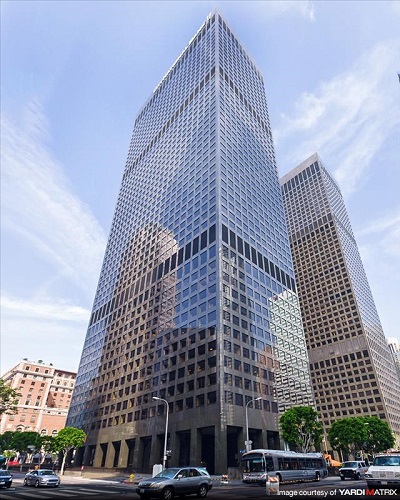 The Los Angeles real estate market saw increased development in the 1970s, as architects and developers continued to experiment and push the boundaries of design. L.A. construction was concentrated westward and the decade debuted in full force with the completion of City National Plaza on South Flower Street in 1972. Formerly known as ARCO Plaza, the 52-story buildings were the tallest twin towers in the world at the time, up until the build-out of the World Trade Center in New York City. The City National Plaza South and North towers remain the tallest twin buildings in the U.S. outside of the Big Apple. The office complex is home to companies such as architecture firm Gensler, Northwestern Mutual, Paul Hastings, AECOM and City National Bank. The towers and their shared plaza were featured in movies such as The Omega Man in 1971 and Marathon Man in 1976.

The 1970s also saw the construction of the modernist Aon Center office skyscraper on Wilshire Boulevard. It was the tallest building in the world outside of New York City when it was completed in 1973, and held the title of L.A.’s tallest building until 1989. The Aon Center made the news in the spring of 1988, when a fire broke out that damaged five floors and injured roughly 40 people. At the time, fire sprinkler systems were not required for office towers, which led to the fire spreading and burning for many hours. The incident led to the modification of Los Angeles building codes, requiring all high-rise buildings to feature sprinkler systems.

Other notable developments finalized during the 1970s in Los Angeles include The Bloc on South Flower Street and the Bank of America Plaza on South Hope Street in Bunker Hill. Tourism was also booming in the city during that time, leading to the construction of several new hotels, including the Sheraton Grand Los Angeles in 1973, the Westin Bonaventure Hotel in 1976, and the DoubleTree by Hilton Hotel Los Angeles Downtown in 1977.

The 1980s saw the development of subway and commuter rail systems in Los Angeles, spurring on investment on the city’s west side. Various new office towers popped up on Grand Avenue and South Figueroa Street during this time, including the Wells Fargo Center, One California Plaza, and the Figueroa Tower. The $1.2 billion California Plaza project debuted in 1983, calling for the construction of three modern office towers in the Bunker Hill District. The 42-story One California Plaza was completed in 1985 and earned a BOMA Building of the Year award in 1989. However, when Two California Plaza was finalized in 1992, the downtown Los Angeles market was in the midst of a significant slump, and plans for the third tower were scratched. The Wells Fargo Center North and South towers were also completed during this time, in 1982 and 1983, respectively. The award-winning twin towers are connected by a three-story atrium and were designed by Skidmore, Owings & Merrill. In 1985, SOM designed yet another familiar Westside L.A. office tower — the 41-story Ernst & Young Plaza, which at the time of opening served as the Californian headquarters for Citicorp. The building was actually featured in the movie The Day After Tomorrow, though the action takes place in New York City.

Some of L.A.’s most recognizable towers were completed during the Nineties, the most iconic being the U.S. Bank Tower on West Fifth Street. Upon completion in 1990, the 73-story tower was the tallest building in California, the 14th tallest in the U.S. and the second-tallest west of the Mississippi, titles it held until the topping out of the Wilshire Grand Center this spring. Designed by Henry Cobb, the $350 million building also stood out by being the world’s tallest building with a rooftop heliport, up until 2004, when Taipei 101 opened in Taiwan. At that time, all high-rise buildings in Los Angeles were required to include a rooftop helipad, a building code that was abolished in the fall of 2014.

The second tower of the California Plaza project was also completed in 1990. Two California Plaza rose 52 stories at 350 S. Grand Ave. and actually opened at just 30% occupancy. The downtown Los Angeles real estate market was going through a slump, with office vacancy rates nearing 25%, The New York Times reported in late 1991. Consequently, plans for Three California Plaza were scratched and the project concluded with the opening of the second tower.

Other notable projects that took shape during the 1990s include The Gas Company Tower, featured in the 1994 movie Speed, and the A.C. Martin-designed Figueroa at Wilshire, winner of the Outstanding New Office Building Rose Award in 1991.

The Los Angeles real estate market continued to blossom throughout the 2000s, peaking in 2016, the best year of the past decade in terms of office sales. The city reached another height this year–a literal height–with the topping out of Wilshire Grand Center, currently the tallest building in California and west of the Mississippi. The 73-story skyscraper topped out at 1,100 feet in March, surpassing the U.S. Bank Tower by 82 feet. Part of a $1.2 billion mixed-use project meant to revitalize downtown Los Angeles and the Financial District, the Wilshire Grand, like many other towering L.A. structures, was designed by architectural firm A.C. Martin. The glass-clad building is also the first skyscraper over 75 feet tall to not incorporate a ‘flat roof’ design since 1974, as Los Angeles high-rises are no longer required to include rooftop helipads. Fun fact: the only other tower in the city with a spire on top is the Los Angeles City Hall, designed by A.C. Martin’s founder.

Another recent highlight of high-rise construction in the city was the development of the Ritz-Carlton/Marriott Marquis Los Angeles hotel in 2010. Upon completion, the Gensler-designed hotel was the first high-rise to be built in the downtown area in 20 years, filling the otherwise empty southwest corner of the city skyline.

With outdated building codes no longer restricting what architects and developers can do, there’s no telling what the Los Angeles skyline will look like 10 or 20 years from now. Where do you think it might be heading?

Want to see what some of the most popular office markets have to offer? Select any location from those linked below to check out the local listings!