Nearly three years into the project, Wright Runstad has broken ground on the final element of its massive, 1.2-million-square-foot Rainier Square mixed-use development — the 10-story component at University St. and Fourth Ave., the southwest corner of the Rainier Square block.

The “400 University @ Rainier Square” project was initially planned as a hotel, but now it will bring 110,000 square feet of office space in Seattle’s central business district instead. The speculative project will also include 12,000 square feet of retail and lounge space below the office floors, as well as: 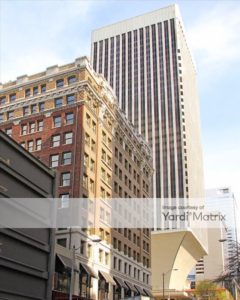 Completion of 400 University @ Rainier Square is scheduled for July 2021. The contractor on the project is BNBuilders, while NBBJ is the designer and a Colliers International team will spearhead leasing. Office tenants in the building will have access to the many amenities that Rainier Square has to offer, including an Equinox fitness club, the PCC Community Markets flagship store at the base of Rainier Square, the Grand Hall, and 16,000 square feet of additional outdoor space.

The developer expressed confidence in the market’s resilience beyond the temporary COVID-19 situation. Company President, Greg Johnson, noted the block’s importance in stimulating this last phase of its development. Specifically, 400 University is located next to the 58-story Rainier Square, which is leased to Amazon — although the e-commerce juggernaut actually chose not to occupy the space.

According to the Puget Sound Business Journal, Johnson said, “Amazon has been successful in subleasing a portion of that and have a lot of interest on the rest, so we’re certainly encouraged there,” referring to Bank of America having subleased 16% of Amazon’s 720,000 square feet of downtown Seattle office space for lease.

Johnson also commented on the fact that big tech companies are a boon for the Emerald City market in this time of uncertainty. “Data security is super important to those types of companies,” he said, “and, in many cases, you just can’t get that at home. Those employers are very interested in getting back to the office as quickly as they can.”

Because of the sheer difference in size, smaller firms would be better equipped to move operations home and put their office spaces back on the market. However, Johnson is quite confident that the office sector will remain at least as well-performing as it was prior to COVID-19, and that developers and landlords could benefit from flexibility.

On working with a prospective tenant for a café wine bar at the base of Rainier Square, he said, “We’re looking at those plans saying, ‘Gosh, if we made adjustments, they’re going to be not only compliant with rules, but attractive to people that might want to use it.’ It’s simple stuff around social distancing.”