Amazon plans to take about 1 million square feet of Queens office space at Savanna’s One Court Square. The building will serve as a temporary location for HQ2 Long Island City, while the company’s campus at Anable Basin is underway. Citi, which has been in the tower since 1990, announced two days ago that it will be moving to make way for the e-commerce giant.

At 53 stories tall, the 1.4 million-square-foot building at One Court Square offers unobstructed views of the Manhattan skyline and is a convenient three-minute subway ride from Midtown. In 2019, Amazon will occupy up to 500,000 square feet here. In the meantime, design and development is set to take off at its 4 million-square-foot campus at Anable Basin, located between Vernon Boulevard and the East River. 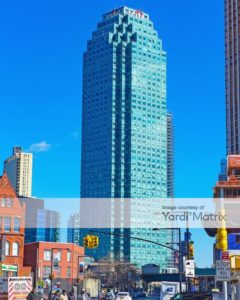 Citi announced it will relocate approximately 1,100 employees out of its space at One Court Square over the first half of next year to make room for Amazon. The employees will move to other Citi locations, including the 38-story headquarters at 388 Greenwich Street in Tribeca. The finance company also plans to vacate one million square feet across 31 floors in the tower in 2020, according to the Commercial Observer. Currently 3,000 Citi employees work there.

“Given what it would mean to New York and Long Island City to have Amazon establish a significant presence here, we want to do our part to make this possible. We have committed to vacate certain floors at One Court Square early and move about 1,100 of the colleagues who presently work there to alternate locations, including in Long Island City and our Tribeca headquarters. As a company that has been based here since our founding 206 years ago, we couldn’t be happier to welcome Amazon to the great City of New York,” Citi CEO, Michael Corbat, said.

On Tuesday, Amazon announced the locations for its split HQ2—Crystal City, Va., and Long Island City. Each municipality will add around 25,000 jobs, as well as $2.5 billion in investments over the next two decades. The Wall Street Journal reports that New York offered an incentive package of nearly $3 billion to secure HQ2. Virginia’s offer totaled around $2.5 billion, with the state willing to pay more if Amazon creates as many as 37,850 new jobs at the location branded National Landing. In a conference on Tuesday, Northern Virginia officials presented how the region plans to prepare for Amazon’s coming, tackling issues like infrastructure and access to tech talent.

Next Story:
Chicago School of Architecture 101