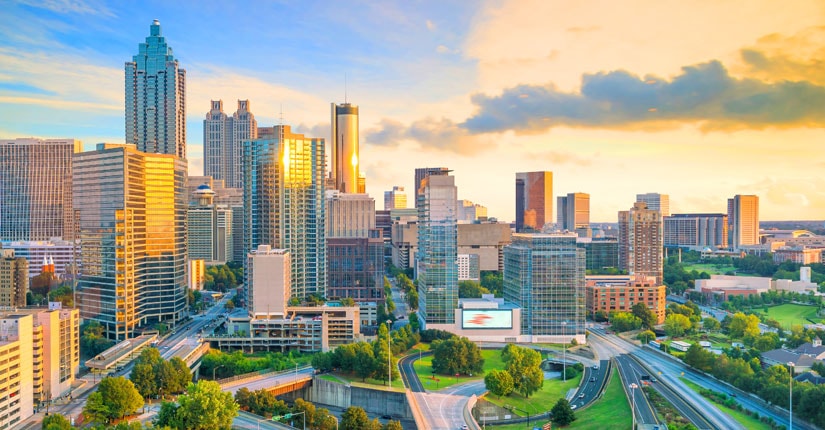 The City of Atlanta is the capital of Georgia and, at nearly 475,000 residents, it is also the largest city in the state. As the total metropolitan population is over 5.7 million people in the Atlanta-Sandy Springs-Roswell MSA, the area is the ninth-largest metro area in the U.S. and is known as the Shining Star of the South. With a GDP of $339 billion Atlanta is home to 16 Fortune 500 companies along with a diverse mix of businesses in the advanced manufacturing, technology, bioscience, clean-tech and auto industries. Industry of all types is attracted to the dynamic city, creating an almost unprecedented demand for commercial real estate in Atlanta.

With a growing job base, the median household income of over $50,000 has grown by 10% over the previous year. Income growth in the Atlanta metropolitan area is expected to remain strong as companies continue to be attracted to the business-friendly city, a talented workforce with the third-lowest unionization rate in the country, and the unmatched domestic and global access that the city offers.

Over 75% of all the Fortune 1000 companies do business in metro Atlanta and the area is home to nearly 1,300 multinational corporations. Other industries that play a major role in the commercial real estate market of Atlanta include logistics, media, information technology, and education.

There is nearly 770 million square feet of industrial space in all nine of Atlanta's submarkets, with flex space accounting for less than 8% of that figure. Despite new speculative product coming onto the market, industrial vacancy rates in Atlanta continue to decline as net absorption is nearing a record high. With very little industrial product in the pipeline, both rental rates and CAP rates for industrial space in Atlanta remain stable.

With nearly 223 million square feet of office inventory in Atlanta's 12 submarkets, office vacancy rates in Atlanta are holding steady despite the delivery of over 1.4 million square feet of new office product. Net absorption, asking rents, and CAP rates all increasing, and all market indicators are expected to continue moving in the right directions. Class A office space in the Atlanta metro area accounts for just over 50% of the inventory total. Some of the popular areas for office spaces are Midtown, Buckhead and Downtown Atlanta.

The retail market in Atlanta has been expanding significantly, with just under 167 million square feet of inventory and vacancy rates barely over 9%, the market is seeing near-historic positive absorption, new product delivery and the lowest vacancy rate in years. With nearly 3 million square feet of product in the pipeline, much of the new retail product is coming from the development of mixed-use projects in the northern suburbs of Atlanta including Decatur, Johns Creek, and Alpharetta.

With a cost of living that is 17% below the national average, both employers and employees are attracted to the job market in Atlanta. Nearly 42% of the labor force works in management, education and training, business and financial operations, and sales. Major employers in Atlanta include Coca-Cola, Delta Air Lines, SunTrust Bank, and CNN.

The Atlanta Public School District operates the 50 primary schools, 15 middle schools, and 21 high schools providing education to nearly 55,000 students. There are also a number of charter schools, private schools and non-traditional schools in Atlanta, including the West End Academy and the New School of Atlanta.

Residents in Atlanta have a commute time of just under 24 minutes each day, with over 2% of the workforce having a super commute of 90 minutes or more. Public transit in Atlanta is a popular commuting choice, with over 10% of the work week commuters choosing this route, while almost 8% take advantage of working at home.

Over 80% of the population of the U.S. can be reached with just two hours of flight time from Atlanta, and more than 40% of the country's manufacturing and distribution industries are within a 500-mile radius of Atlanta.

Previously, game developers had few options when developing their craft. They would either work locked away in their bedrooms or rent out ultra-expensive studio space in an up-and-coming part of town. But, thanks to the coworking office revolution, game developers have new choices for cooperativ...