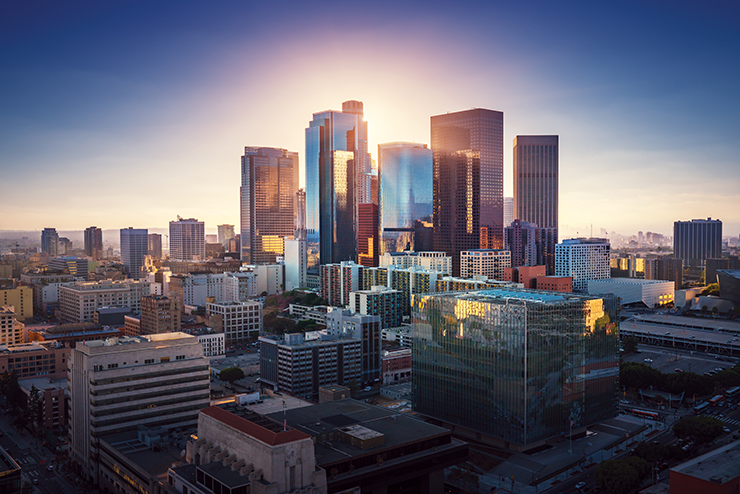 California’s markets have continued cooling down from the overall intense investment activity seen across the board during 2016. Roughly $22 billion in sales volume was accumulated in 288 major 2017 deals, across the 7 office markets we looked at. This signifies a 17% decrease in sales, compared to the previous year’s roughly $26 billion volume. California sales closed during 2017 encompassed 60 million square feet of office space, which was 11% less than the 68 million square feet of inventory that changed hands during 2016.

According to Yardi Matrix data, all the California office markets we analyzed recorded a drop in sales from Q3 to Q4, with the exception of Los Angeles and Sacramento, which saw an uptick in investment activity. Additionally, L.A. and the Bay Area were the only two markets to draw the quarterly tally above the $1 billion mark. Wrapping up Q4 with $407 million in sales, the San Diego office market cooled down after a red-hot Q3. Sales activity during Q4 was slowest in the Inland Empire, Orange County and San Francisco office markets, with San Fran wrapping up its slowest quarter on record.

Just over 13 million square feet of office space changed hands during last year’s fourth quarter, 46% of which traded in L.A.—more than the inventory sold in the next two office markets combined (Bay Area and San Diego).

A total of 56 office deals closed during Q4 2017 in California, amounting to just over $4.3 billion in sales volume. This marked a 49% year-over-year decrease from Q4 2016. The largest quarterly sales in each market were suburban office properties, the exceptions being the Riverpark Towers in downtown San Jose and the Natomas Corporate Center in Sacramento. The Pacific Corporate Towers, located in the L.A. suburb of El Segundo, traded in the largest deal of the quarter, marking also the largest California office sale of the year. The top Q4 office transaction in San Francisco was Gemini Rosemont’s purchase of 600 Clipper Drive in Belmont, while the largest trade on the San Diego office market was that of a 10-building portfolio located in the Mission Valley East and Sorrento Valley office submarkets.

Nearly half of the top 10 California office sales of the year were recorded on the Los Angeles market. San Francisco takes second place, as it was home to three of the year’s priciest office transactions. Q3 was the Bay Area’s best performing quarter in 2017, with one deal closed in September landing second spot in our top 10, very closely behind number one. Last but not least, the $443 million August sale of the Five Point Gateway portfolio also secured a spot for the Orange County office market in the 2017 Top 10.
Read on to learn more about how each market concluded the year, as well as what the California office pipeline delivered and what’s expected in 2018.

Average Price Per SqFt Climbs to $469 in Los Angeles

Los Angeles was the only one out of the seven California office markets we researched to see an uptick in the average price per square foot during Q4 2017. This metric was on a steady rise throughout the year, wrapping up Q4 at $469 per square foot—just 9% below the peak value recorded in Q4 2016.

With regard to sales volume, the past quarter marks L.A.’s second Q4 in five years to close above the $2 billion mark, 21% behind the $2.7 billion in sales recorded during Q4 2016. Although it wasn’t one of the market’s best quarters overall, sales amassed during Q4 2017 were noticeably above average.

Transactions closed on the Los Angeles market in 2017 amounted to $7 billion in sales—the second-highest dollar volume of the past 5 years, lagging 21% behind the $9 billion amassed during 2016. Although the price per square foot maintained an upward trend throughout the year, it started out with a 45% quarter-over-quarter tumble from the record-high $513 per square foot seen in Q4 2016. Overall, the market recovered quite well and wrapped up the year with prices merely 8% below the $424-per-square-foot average of 2016.

The Bay Area office market concluded Q4 2017 with 14 transactions closed and $1.4 billion in sales volume—marking a 29% drop compared to Q3 and a 17% year-over-year decrease.

Close to 4 million square feet of space traded in Q4, which is roughly on par with the numbers recorded in the past five years. The largest of the 14 transactions closed in Q4 was recorded in December, when DivcoWest and the Rockpoint Group paid $284 million for SteelWave’s RiverPark Towers I and II in downtown San Jose. Built 22 years apart, the granite-clad, 16-story towers encompass roughly 603,000 square feet of Class A office space.

Total office investments in the Bay Area in 2017 raked in nearly $6 billion—the highest dollar volume of the past five years, proving that the market has not lost its appeal to buyers. Even though the 2017 average sale price per square foot ($339) slipped 1% compared to 2016 ($342), an overall increase in office investment activity made up for it. Nearly 16 million square feet of Bay Area office space changed hands in 2017 (7% more than in 2016), while the total sales volume also rose 17% compared to the previous year.

After reaching a two-year peak in Q3, the San Diego office market wrapped up Q4 2017 with $450 million in sales volume—a 58% drop compared to the previous quarter and a 26% year-over-year decrease.

Despite quarterly fluctuations, 2017 was a pretty good year for the San Diego market. The yearly sales volume added up to $1.8 billion, which is the market’s second-highest in 5 years, and 11% more than the 2016 investment total. What’s more, the sales price per square foot in 2017 passed the $300 mark and reached a five-year peak, averaging $311 per square foot—14% higher than the numbers recorded in 2016.

Office investment activity on the Sacramento market picked up steam after a disappointing Q3, closing the quarter with $198 million in sales. While the Q4 dollar volume swelled compared to Q3, it rested a full 55% below Q4 2016 values. Ample fluctuations, however, are not unusual on a smaller office market like Sacramento.
The average price per square foot also took a downward turn, falling 24% year-over-year to $184.

Of the six transactions to close in Sacramento during Q4, the priciest deal was recorded in November, and accounted for nearly 30% of the total quarterly sales volume. Evergreen Co. paid $56 million for the Natomas Corporate Center—a Class A, institutional-quality two-building office portfolio totaling 293,000 square feet.

Investments on the Sacramento office market amounted to an annual dollar volume of nearly $700 million. While Sacramento doesn’t attract the same amount of capital as Los Angeles or the Bay Area, the market managed to tick off its second-highest sales volume in 5 years. At 20 major deals closed and 3 million square feet of office space transacted, 2017 was overall an OK year for Sacramento.

Office sales activity on the San Francisco market has been slowing since Q4 2016 and hit the brakes during Q4 2017. December concluded the market’s slowest quarter in the past five years, with a sales volume of $105 million amassed in only two transactions. With that, sales took a 96% year-over-year tumble in Q4, with less than 300,000 square feet of office space changing hands.

Due to low office sales activity, no reliable average price per square foot could be calculated for the San Francisco office market in Q4 2017. The largest sale of the quarter was recorded in October, when Gemini Rosemont completed the acquisition of the 158,269-square-foot Class B office building at 600 Clipper Drive in Belmont, for upwards of $89 million.

A total of 29 major deals closed on the San Francisco market in 2017, adding up to an annual sales volume of $3.6 billion—a steep 58% drop compared to 2016, and the second-lowest dollar volume, according to data going back five years. Even though investment activity slowed significantly in 2017, San Francisco remains California’s priciest office market, with an annual average of $552 per square foot.

The Orange County office market wrapped up the year with an unusually slow final quarter. With $63 million in sales, Q4 2017 marked a 91% year-over-year drop. Moreover, the dollar volume amassed during last year’s final quarter is a mere 4% of the total 2017 O.C. office sales volume.

The biggest deal to close in Q4 accounted for 43% of the total quarterly sales volume—The Pacific Sunwear Global Headquarters building in Anaheim commanded $27 million, which Hines and Oaktree paid in October, checking off the joint venture’s ninth acquisition in 6 years on the North Orange county submarket.

Despite a strangely sluggish Q4, total sales recorded on the Orange County office market in 2017 amounted to $1.8 billion, marking the second-highest sales volume in the past five years. Both dollar amount and sales prices inched upwards last year—total 2017 O.C. office investments were 4% higher than in 2016, and the average sale price reached a five-year record of $247 per square foot.

Although Q4 was the slowest quarter of the year for the Inland Empire office market, it closed what turned out to be a pretty good year overall. The $29 million in sales amassed during Q4 were just enough to nudge the yearly sales total to $324 million, roughly on par with the 2015 volume—not bad for a primarily industrial real estate market.

Two major office transactions closed during Q4, totaling roughly 147,000 square feet. Due to such low office sales activity, no reliable average price per square foot could be calculated for the Inland Empire office market in Q4 2017. However, it is worth noting that the largest office sale of the quarter commanded $16.5 million—TA Associates Realty sold the Empire Corporate Center in Ontario to MGR Real Estate, in October.

Notable projects that were completed during the year’s final quarter include The Boardwalk and two buildings of the Five Point Gateway project, the three totaling 1.2 million square feet, located in Irvine. The Bay Area also welcomed two new projects in Q4: the 496,500-square-foot Endeavor in Santa Clara and the 229,000-square-foot America Center II in San Jose.

For this report, we relied on Yardi Matrix data to analyze all office transactions to close in the Bay Area, Los Angeles, Orange County, Sacramento, San Diego and San Francisco office markets, during the fourth quarter of 2017 (October through December), and we selected only those carrying price tags equal to or larger than $5 million each. Our research, based on sales data recorded up until January 1st, 2018, includes completed office buildings that are equal to or larger than 50,000 square feet. In the case of mixed-use assets, only properties made up of over 50% office space were included in the analysis. Portfolio deals were counted as single transactions, while distressed sales were excluded altogether. To ensure the trends and comparisons presented in our analysis are valid, we excluded portfolio, partial interest and ground lease deals from our calculation of the average price per square foot.