Elk Grove Village is part of the greater Chicagoland area and is immediately adjacent to both the City of Chicago and O'Hare International Airport. The Village is home to largest business park in the country, which includes 62 million square feet of industrial space, and - ironically, given the commercial-nature of the area - is named after the small herd of elk that live in the Busse Woods Forest Preserve next to the Village. Industrial real estate in Elk Grove Village plays a major role in the local economy, as well as that of the entire Chicagoland area.

Over 33,000 residents call Elk Grove Village home, as do the over 4,000 businesses that operate in the Village's industrial parks and commercial areas. Incredibly, just over the past year, job growth in Elk Grove Village has more than doubled, as industry flocks to this business-friendly commercial and industrial municipality, which offers easy land and air access to both the U.S. and foreign markets.

Recently, Elk Grove Village was named by Global Trade Magazine as one of America’s Best Cities For Global Trade, due in large part to the 5.9 square mile business and industrial park that the Village is known around the world for. With over 62 million square feet of commercial space in Elk Grove Village, proximity to O'Hare International Airport, the City of Chicago, access to extensive rail service within the industrial parks and to the Midwestern U.S., and the I-90, 290, 294, 355 and 390 Interstates and expressways, Elk Grove Village has been able to attract over 4,000 businesses that employ nearly 100,000 people.

As part of the O'Hare Submarket, the availability of industrial space in Elk Grove Village is extremely limited, due to demand from businesses seeking space adjacent to O'Hare International Airport. Vacancy rates run just over 3.5%, with positive net absorption and rent rate increases. On the office category side, although O'Hare is the smallest of the Chicagoland submarkets, it continues to be highly attractive to corporate tenants due to its access to varied transportation networks and its location to O'Hare International Airport, the City of Chicago, and the surrounding suburban markets. Vacancy rates, net absorption and rental increases all continue to move in the right direction.

With an unemployment rate of barely over 5%, job growth in Elk Grove Village continues to be positive year after year. Of the nearly 100,000 jobs created within the business-friendly municipality, the majority are in the areas of manufacturing, healthcare, retail trade, transportation & warehousing, and professional, scientific & technical services. The Village is home to both the largest concentration of manufacturers in the Midwestern U.S. and the largest concentration of logistic freight companies, and is the second-largest source of manufacturing in Illinois, second only to the City of Chicago itself.

Elk Grove Village has nine elementary schools, five middle schools and four high schools. One of the most prestigious elementary schools is the Queen of Rosary Catholic School, which was recently named by Chicago Magazine as one of the Top 25 Private Elementary Schools in the Chicagoland area.

For over 150 years, Chicago has been recognized worldwide as a leading center of post-secondary education. Some of the most notable universities include Northwestern University, with over 9,500 graduates each year, University of Illinois at Chicago, with over 7,000 graduates, and DePaul University, with nearly 6,600 annual graduates. The most common areas of study are registered nursing, general business administration and management, and general psychology.

Commuters in Elk Grove Village have a relatively short commute time of just over 25 minutes each way. But Chicago is one of those metropolitan areas where a five minute difference getting on the expressway can make a 30 minute commute turn into a 90 minute commute. Not only is there congestion from suburban commuters coming into the city and back out at the end of the work day, but traffic will also back up commuting from one suburb to another.

When it comes to mass transit, business and industrial transportation infrastructure in Elk Grove Village, both residents and business benefit from the varied and integrated options: 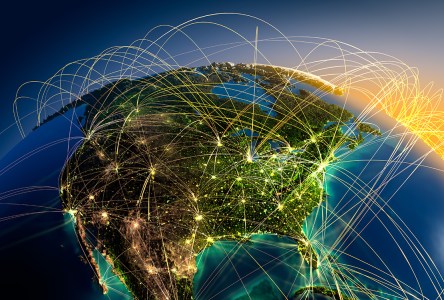