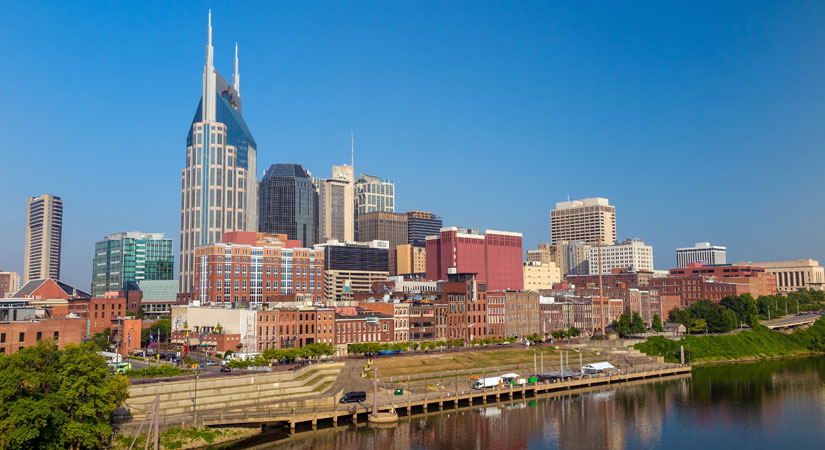 The Nashville Metropolitan Area includes the Metro Center, Green Hills and Germantown submarkets.  With a metropolitan population of over 1.8 million people, the city’s economy is driven by a diverse mix of business, including the tourism, healthcare, and education sectors.

The city has earned its nickname thanks to being the center of the Country music industry. Along with the music & entertainment industry, the demand for office space in Nashville is also driven by healthcare and corporate head office users.

With a gross metropolitan product of nearly $103 billion annually, there is consistent demand for white collar labor in the city. About 47% of the inventory in the city is Class A or A+, while Class B product adds another 50% of space to the market.

Demand for Class A space is strong in Downtown Nashville, located just east of 8th Avenue South and west of the Cumberland River. Prime buildings such as the L & C Tower on Church Street, The Baker Donelson Center, and the SunTrust Plaza at 401 Commerce Street are all part of this submarket. Music Row, a neighborhood traditionally associated with the music industry, is also seeing growing demand for its blooming commercial real estate market.

One of the best examples of green office space in Nashville is the LEED-certified Gulch Crossing office building on Demonbreun Street. Built in 2015, this nearly 240,000-square-foot Class A property is located in The Gulch neighborhood and is the proud recipient of the coveted LEED Gold certification.

The most recent National Green Building Adoption Index looked at energy-efficient office buildings in the top 30 U.S. markets in 2017. The survey discovered that the percentage of LEED-certified and Energy Star-rated construction for office buildings has increased from less than 5% in 2005 to 38% by mid-2017.

While Nashville didn’t make the top 30, the city is definitely moving in the right direction, with Gulch Crossing as a fine example.

Demand for commercial real estate here is created by a variety of business and industry in the city. Top sectors in Nashville include healthcare, music & entertainment, and government sectors, as well Fortune 500 companies.

MLL Capital on its Way to $500M Medical Office Portfolio

MLL Capital has started building a $500 million portfolio of institutional assets in the medical office, laboratory and life sciences sector. The investment firm recently purchased the Ravenswood Professional Building — a medical office building in the Ravenswood neighborhood on the north side o...

What It Costs to Rent in the Top 10 Cities for Startups in the U.S.

Back in June, COMMERCIALCafé came out with the Top Cities for Startups in the United States, in which we analyzed data of the 50 most populous cities in the country to determine which 20 cities were best for early-stage startups. Working professionals with years of experience, as well as talente...