The April jobs report came in below expectations, but the overall unemployment trend has continued to improve throughout the last few months. Currently, it sits at 6.1%, which is up from 6% last month — still below January (6.3%) and far below the lows of one year ago (14.8%).

So, using data from the Bureau of Labor Statistics, we looked at the fastest-growing jobs from 2019 to 2020 — the most recent report available on occupational job growth. And, although the report excludes the majority of the pandemic, it does include the first two months — April and May. Consequently, the report shows which jobs and industries were on the rise at the beginning of last year — a good indication of what’s to come as the pandemic seemed to accelerate existing trends. 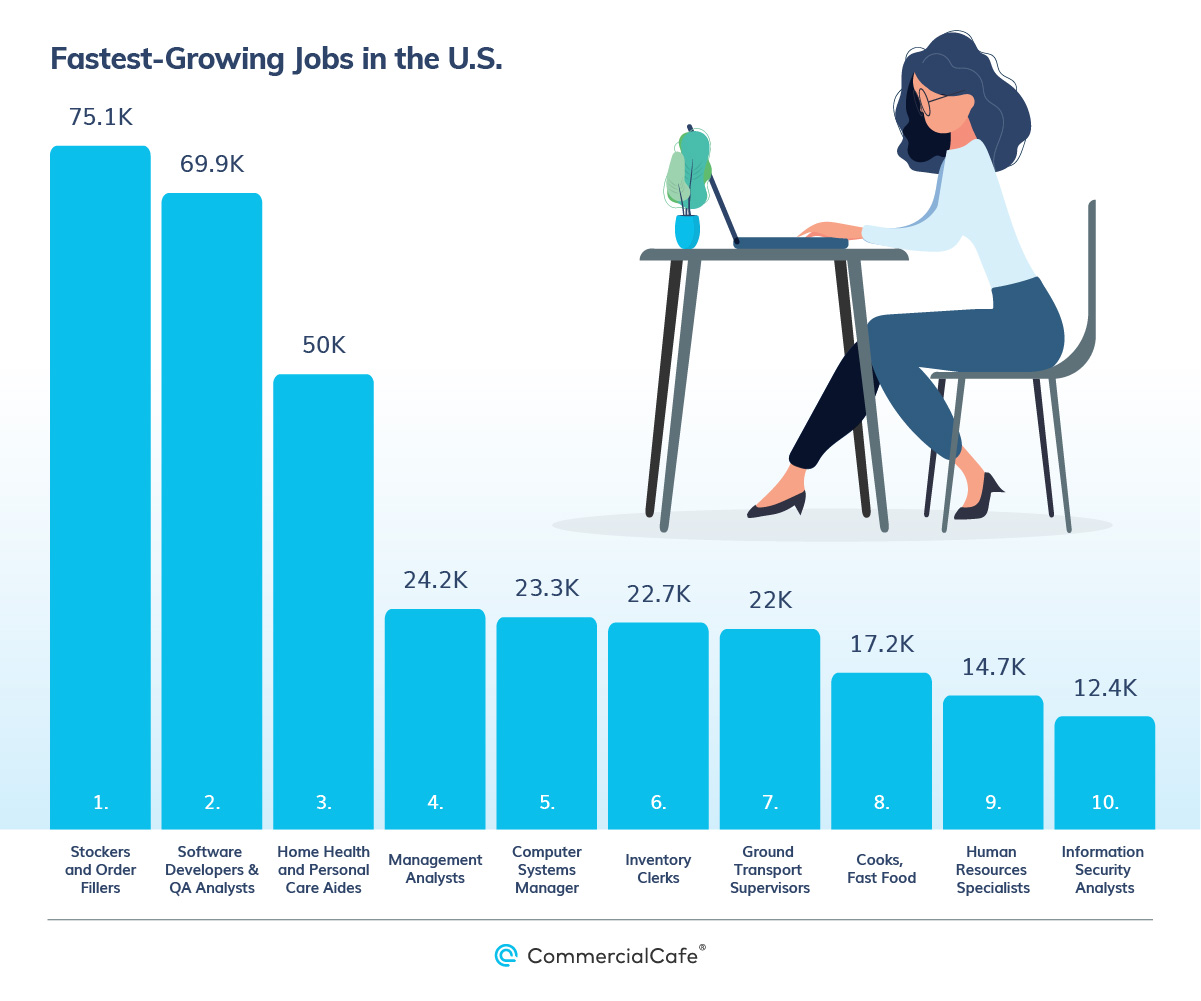 Below is a map of the continental U.S. that shows which industry added the most positions in each state during the last year, according to volume. Hover over the states to see the fastest-growing job in each state.

As you might expect, Amazon was a leader in the creation of stockers and order fillers. Its fulfillment centers and delivery services — in addition to other companies like them — were not only deemed essential services but were also essential for everyone stuck in their homes for extended periods of time.

Similarly, IT and technology sector jobs also saw significant growth from 2019 to 2020, accounting for three of the five industries represented in the top 10 fastest-growing jobs. Indeed, the top three tech jobs added more than 105,000 positions in the same time period. These jobs also proved to be resilient when the pandemic hit, as many transitioned to working remotely with less difficulty than other types of jobs.

Likewise, jobs in home healthcare also increased as Baby Boomers continue to move through retirement and the overall age of the U.S. population ticks higher. In fact, personal care aide positions grew 1.5% from 2019 to 2020, adding more than 50,000 jobs nationwide.

The map below shows which occupation has grown the most in each state from 2019 to 2020 by percentage. Hover over the states to see the fastest-growing job in each state.

The industrial sector led the way in the Midwest and South. Construction workers, carpenters, highway maintenance workers and machinists were just some of the various industrial positions that grew the fastest in these states. The largest growth in this sector was in South Carolina, which added 2,120 highway maintenance workers from 2019 to 2020 — an increase of more than 400%.

However, the occupation that grew the fastest is the forest and conservation technician, which led the way across the western part of the country. What’s more, the growth rate for this position also increased. For instance, Arizona, Idaho, Utah, Montana and Oregon all saw an increase of more than 100% in these positions in just one year. Many deal with forest management, working mostly in national parks. However, recently, they’ve also been expanding into the private sector and have become instrumental in helping private landowners manage the forests on their own properties. They also assist in controlled burns to avoid wildfires, as well as plant trees to aid in landslide prevention and support natural wildlife habitat.

Granted, these job growth figures only take the first two months of the pandemic into account. But many of the trends that were occurring prior to the pandemic have only been accelerated by it. And, if it wasn’t already, e-commerce is now a permanent staple in our lives. Just like software was already eating the world prior to the pandemic, both it and e-commerce have only accelerated in the last year. Even so, job growth in environmental conservation occupations is encouraging, especially as it seems to be coinciding with a renewed push toward renewable energy, like solar and wind power.

Check out the table below for the fastest-growing jobs by state, complete with total numbers of jobs.

Notably, a slightly more recent BLS report gives us a snapshot of how industries fared overall during Q2 2020. Using the Quarterly Census of Employment and Wages report, we also looked at the establishment industries that added the most positions, regardless of job type.

Aligning to the previously mentioned jobs that were increasing in demand, local delivery, warehousing and express delivery were the top three industries to grow — by 29%, 16% and 14% year-over-year (Y-o-Y), respectively. In particular, the growth in warehousing is striking. The industry added nearly 194,000 jobs between April and June 2020. Additionally, it’s also clear that the pandemic had an effect on economic programs, as well, as jobs in the administration of such programs grew 5% Y-o-Y, adding more than 27,000 jobs nationwide.

Just like the jobs in the previous sections, the acceleration of trends that preceded the pandemic is also occurring in the same industries across the nation — and around the world. E-commerce and IT are more robust than ever — and they’re still growing.

Further reading – check out the fastest-growing jobs of that last decade.

Data from BLS Occupational Employment Statistics from May 2019 to May 2020 reports.

Data from BLS Quarterly Census of Employment and Wages from Q2 2020.

Occupations that had fewer than 5,000 positions nationwide in 2020 were excluded.

Occupations that had fewer than 500 positions by state in 2019 were excluded.

Occupations with a BLS suffix of “All Other” were excluded.

Next Story:
CommercialEdge & SharpLaunch: A New Partnership for Your Full-Service Client Experience