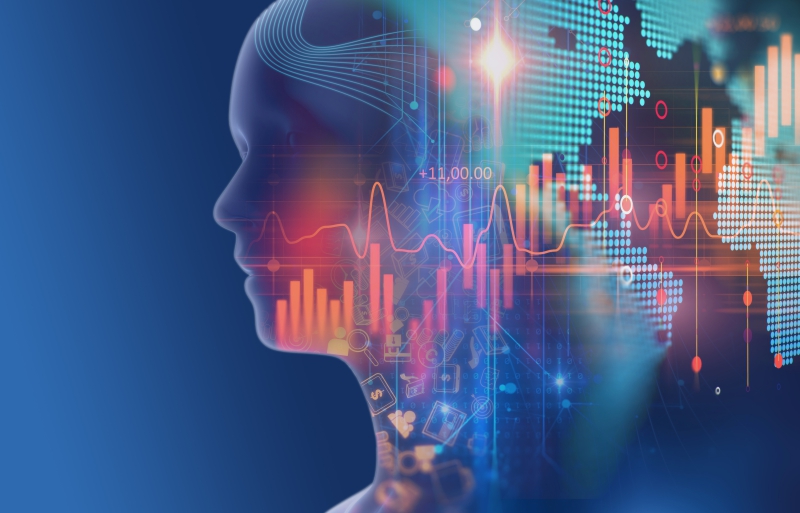 Is Your Job Likely to Be Taken Over by AI?

In its most recent global report concerning the future of work, McKinsey & Co. estimates that, by 2030, up to 800 million individuals could lose their jobs to automation and be forced to find new career paths. As job automation can mean both the introduction of physical, mechanized robots and complicated computer algorithms, this phenomenon won’t just affect blue-collar jobs, but will also have a major impact on white-collar jobs, which require attention to detail and intricate skill sets.

The 20 White-Collar Professions Most Likely to Become Obsolete

As the debate continues around the challenges and impact of progressive job automation, we thought it would be interesting to see how this process might affect the way in which we currently conduct and organize our businesses. Technological advancement and innovation is poised to have a massive impact on what we consider to be high-skill, white-collar professions that we once assumed would be around forever (economists, beware). Consequently, we wanted to see which white-collar professions are most likely to become automated and eventually obsolete—thus giving you time to rethink your career path, in case you find yourself on this list!

We used as a starting point the 20 highest-paying white-collar jobs in the U.S., based on median income earned over the past 12 months (we chose to exclude pink-collar jobs, which are usually included in the white-collar category, from our analysis). After that, we went to www.willrobotstakemyjob.com to see how likely these 20 professions are to become obsolete in the future, and only selected those jobs that had a probability of over 20% of being automated. Consequently, we ended up with a list of 20 high-paying white-collar professions that are most likely to become automated, and possibly obsolete, in the U.S. Check it out below: 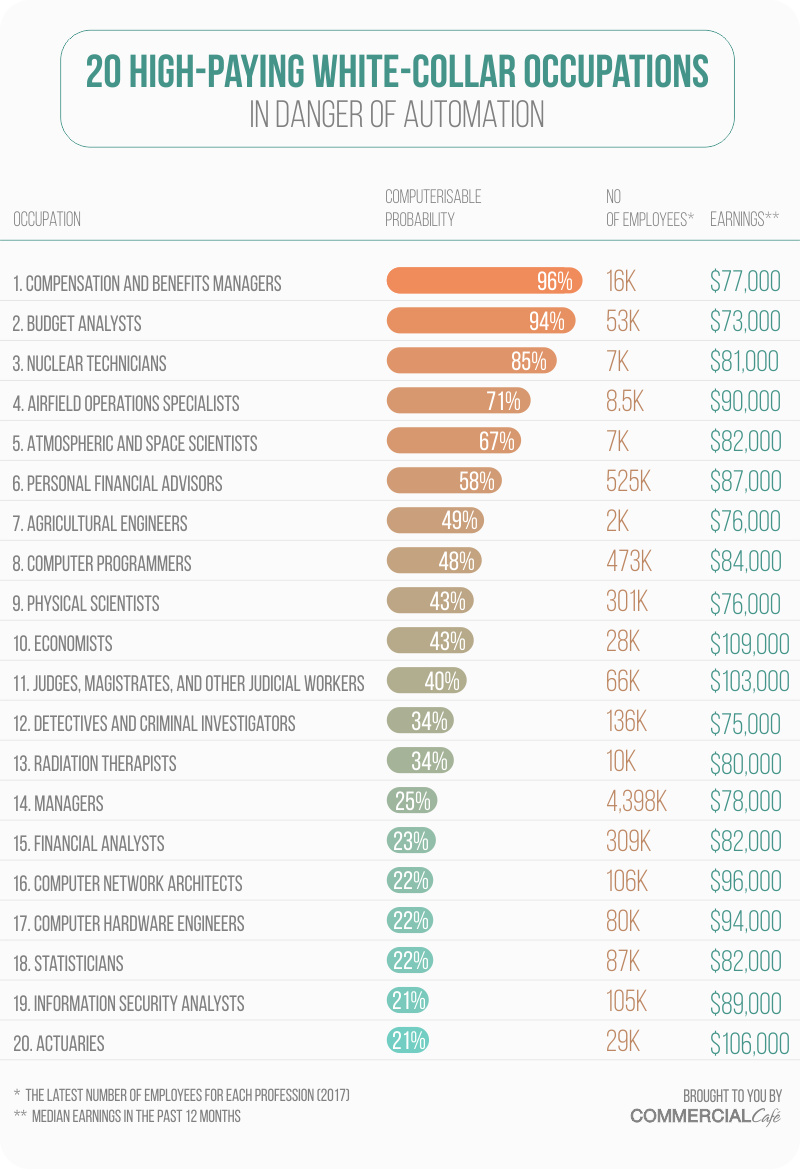 The top-earning profession on our list is that of economists, which stand a 43% chance that they will be displaced and forced to find other ways to make a living; actuaries, which boast a median yearly income of $106,478, are slightly less ‘endangered,’ with a 21% chance of losing their jobs to automation. What’s interesting to see is that even jobs that require attention to detail, capacity for analysis and decision-making are likely to become automated: judicial workers such as judges and magistrates run a 40% risk of being displaced.

The most ‘endangered’ white-collar job in the U.S. seems to be that of compensation and benefits managers. The number of jobs in this profession has been declining over the past couple of years, and there is now a 96% chance of that number eventually becoming zero. That of course doesn’t mean that the 16,000 employees in this profession will necessarily have to pick a new career path. Since these managers handle a company’s benefits program and the internal pay structure, they can possibly transition into a human resources department or they could just switch to a different managerial position with similar responsibilities. So, for some, the transition could be as simple as a job title change. The same goes for budget analysts, which have a 94% chance of being displaced—a budget analyst could easily transition into a position of accountant, financial adviser, marketing analyst, financial analyst, actuary, or revenue collector, to name a few. Therefore, while the title itself might become obsolete, those who work in this profession could easily find work in similar occupations which require a similar set of skills.

Think Leaders Are Safe? Think Again–Managers Stand a 25% Chance of Being Displaced

If you look closely at the table above, you’ll notice one profession that stands out among all the others, through numbers alone: managers. The number of jobs in this branch has been on a constant rise over the past decade, growing from 3.1 million managers in 2011 to 4.3 million in 2017. But these professionals stand a 25% of being displaced due to automation in the future, which makes us wonder how that might affect company costs and the overall business landscape.

Firstly, employees in the management profession take up a lot of office space–660 million square feet, to be exact (based on the assumption that the average office of a manager has 150 square feet). To put that number in perspective, think of it this way: the 4.3 million managers currently working in the U.S. could fill up 174 Willis Towers. Furthermore, managers usually need to have an actual, physical office so that they can manage and communicate effectively with those under their supervision. If the management branch becomes automated, those who work in this field might be able to land positions where they can work remotely or in a co-working space, and thus plenty of office space could be freed up for other uses. 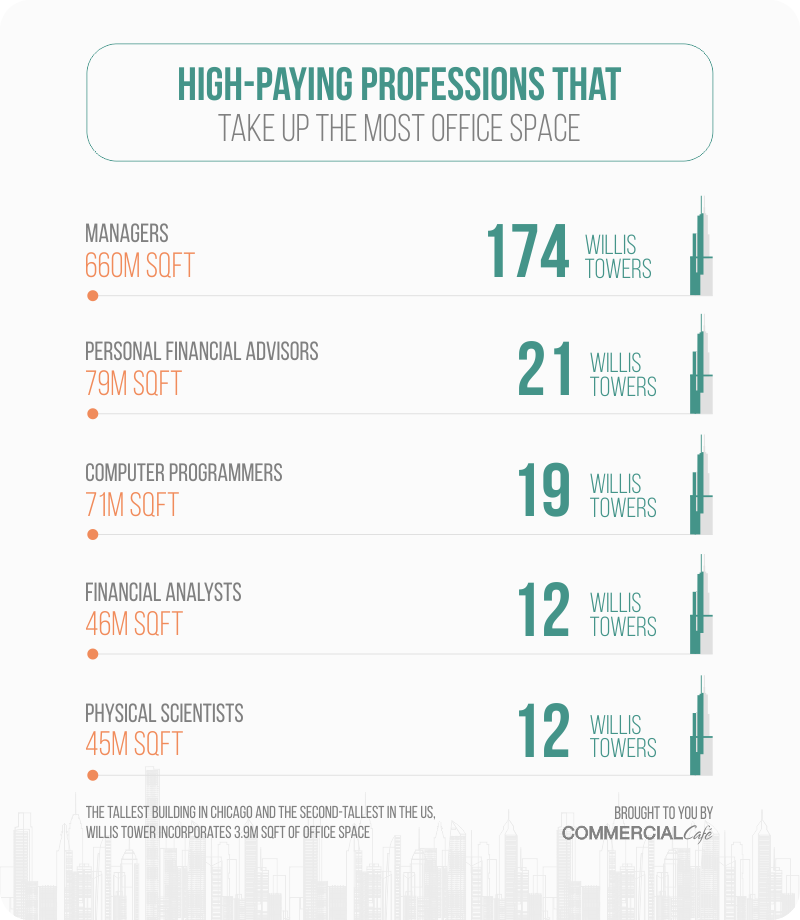 Not only do managers occupy a huge amount of office space, but they also cost companies a lot of money. Since there are so many people working in this professions, the employee costs can reach sky-high numbers. Companies spend over $31 billion in leasing costs each year, just to accommodate the growing number of management employees. Managers also cost businesses $3.4 billion in snack budgets and $99 billion in benefits each year, according to our calculations based on BLS data. By automating the management branch, which takes up so much office space in the U.S., we could also lower our energy and natural gas consumption, which ultimately benefits everyone: managers consume 13 billion kWh per year in electricity and 16 billion cubic feet in natural gas (you can check how much it costs to employ people in each of the 20 professions by downloading our full data set).

We don’t mean to scare anyone, but if you’re currently in a management position, you might not want to get too attached to that spacious corner office.

The automation of some professions can ultimately lead to the creation of new ones, so the people working in those fields won’t end up out of work, but rather they will find alternative career paths. However, there is one factor that can make or break this process, and that is age. These days, the spotlight is directed at Millennials, or young professionals who are tech savvy and can bring fresh ideas and concepts to the table. For these tech-oriented, flexible young adults, the majority of whom are unencumbered by family responsibilities (people are having children and getting married at a much older age than they used to), switching jobs or fields of work won’t be such a big issue. For those who are in their 40s, 50s or 60s, however, the transition is likely to be tricky, as ageism is a big issue in the hiring process.

Employers such as Facebook, Verizon or Amazon, to name just a few, have chosen to exclude certain age groups from the hiring process by targeting specific generations in their job ads, and this practice is apparently widespread across all industries, according to a CNBC report. This reluctance to hire older workers will have the biggest impact on professions where the majority of employees are part of older generations, such as judicial workers and agricultural engineers (most of whom are aged between 55 and 64 years), as well as budget analysts, compensation and benefits managers, space scientists and economists (most of whom are aged between 45 and 54 years). It’s hard enough for older employees to find work in their own field, but if they are to be displaced, it will be that much more difficult for them to learn a new skill set and land a job in a field in which they have no previous experience. 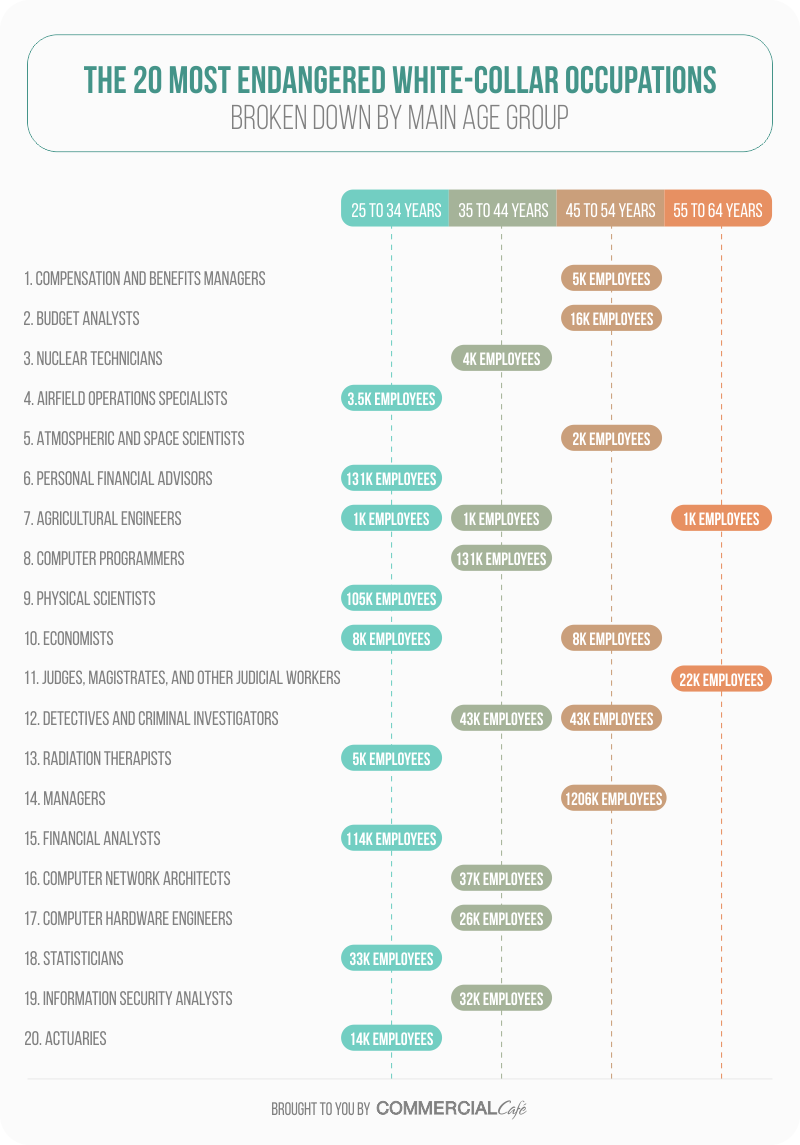 While for many employees the emergence of new technologies means that they will be displaced and will have to choose new career paths, automation will also create new professions and opportunities where there were none. It’s happened before: when automobiles replaced horse-drawn carriages, many workers who were displaced could find new work as mechanics or engineers in this new industry. While professions such as newspaper typesetter, typing pool secretary or telegraph operator have disappeared, new opportunities have arisen that could not have been thought of in the pre-technology or pre-Internet eras. People can now make a living as bloggers, vloggers, social media specialists or web designers—career choices that didn’t even exist a couple of decades ago. Who would have thought that one could make a living by posting make-up tutorials on YouTube?

The McKinsey report, released last December, estimates that 8-9% of the 2030 workforce will be made up of entirely new professions—a phenomenon resulting from job automation and increased computerization, which will render certain professions obsolete and lead to the emergence of new ones. The report suggests that the process of partial or total job automation will pick up speed in the coming years, as scientists continue to make groundbreaking technological advancements and companies realize that automation could lead to lower business costs in the long run. On the other hand, some suggest that job automation and the adoption of artificial intelligence technologies can impact our society in a negative way, and might pose much greater challenges than we expect.

The main question on some of the experts’ minds is this: what happens if robots and algorithms advance to the point where they can replace human workers across all industries? For now, technology seems to side with those who work in creative fields that require the use of intuition, imagination and judgement, as well as those in low-skill professions, where it’s more cost-effective to hire an actual person than to adopt and implement a new technology. However, the world of robotics and AI is hitting remarkable milestones, getting closer and closer to developing a robot or algorithm that can think for itself: Sophia, a super-advanced robot created by Hanson Robotics, can mirror human gestures and interactions in a way that is frighteningly realistic—the robot can mimic 62 different facial expressions and is the UN Development Programme’s first non-human Innovation Champion.

But maybe we’re getting ahead of ourselves. It’s highly unlikely that any of the professions listed above will simply disappear into thin air from one day to the next, and technology is yet to catch up with the intricacies of human nature and thought. Even so, you should never get too comfortable and take your current job for granted, even if you’re in a leadership, creative or top-paying profession, because you never know what science and technology might cook up next.

Previous Story:
Are You a Freelancer from Jacksonville? Bring Your Laptop to These Coffee Shops