Santa Monica is a beachfront city in Santa Monica Bay, located in western Los Angeles County. A famed resort town, Santa Monica is bordered on three sides by the city of Los Angeles and the Pacific Ocean on the west, encompassing an area slightly greater than eight square miles. The city is home to a residential population of over 93,600 and accommodates over 23,150 companies. Santa Monica has emerged as the center of “Silicon Beach” and is home to hundreds of venture-capital funded startups. With its thriving tech startup culture and small business community, it’s currently ranked by Fundera as the 6th best city for small business. Santa Monica is also home to numerous tourist attractions, including the famed Santa Monica Pier and vibrant shopping districts. Santa Monica is also one of the most environmentally activist municipalities in the nation, as one of the first to formally adopt a comprehensive sustainability plan. Due to its agreeable climate, revitalized downtown core, significant job growth, and coastal tourism industry, Santa Monica commercial real estate is among the most desirable in the State.

Santa Monica lies at the heart of “Silicon Beach,” the Westside region of the Los Angeles metropolitan area, and hosts over 500 technology startup companies. In 2016, Santa Monica ranked 2nd in terms of companies funded by venture capital firms, just behind the neighboring city of Venice. Unlike the traditional definition of Silicon Valley, Silicon Beach boasts a more diversified economy where tourism, finance, and other industries play a vital role. Nearby startup incubators and accelerators include Amplify.LA and the Disney Accelerator, serving startup firms such as Vertabrae, Inc., Tradesy, Headspace, and ZipRecruiter.

Santa Monica’s tourism industry caters to over 7.3 million Pier visitors each year, which bring in a total annual contribution of approximately $2 billion. Its larger-scale technology sector includes the headquarters of notable companies such as Hulu and the RAND Corporation. Entertainment companies like Universal Music Group and Lionsgate Films, also maintain headquarters in the City.

A number of game development studios are based in Santa Monica, as well, making it a major location for the industry. Headquarters to retail brand TOMS Shoes, can also be found here. Local businesses will find that Santa Monica is home to a highly affluent community, with median household income levels significantly higher than the rest of the State, sitting at approximately $77,000.

Due to its advantageous positioning in proximity to Los Angeles and its centrality to Silicon Beach, Santa Monica offers startups and other small business owners an ideal location with ocean views, access to a middle-class income demographic, and exposure to its tourism industry. Technology and entertainment industries continue to drive commercial growth in the area, although healthcare is not far behind. In terms of retail, Santa Monica is home to three main shopping districts, Montana Avenue on the north side, the Downtown District in the city's core, and Main Street on the south end. Rental properties for lease here, including office and commercial space, can be found throughout the numerous neighborhoods of Santa Monica at large, but are concentrated in the downtown core.

The Santa Monica office market is currently experiencing a rapid rise in tenant demand, after a handful of well publicized companies had left two years prior. Absorption in the micro market is on the rise, driven by large scale expansions and relocation by homegrown technology companies. Santa Monica offers a total inventory of just over 7.7 million square feet of office space, with 422,000 square feet under construction as of mid-2017, at a total vacancy rate of 14.2%. Santa Monica is the second-largest office market in the Westside L.A. region, just behind Century City.

Downtown Santa Monica currently hosts a wide variety of businesses that differ greatly in size and offers the maximum possible visibility in the area. The Downtown Santa Monica commercial real estate market is located just steps away from the Pier and placed among vibrant shopping locations, such as the Third Street Promenade, a major outdoor pedestrian-only shopping district between Wilshire Blvd. and Broadway. Santa Monica Place, a three-level outdoor shopping center, can also be found here.

Record-high levels of employment in Santa Monica are set to sustain a growing economy for the years ahead. Santa Monica boasts a labor force of 56,900, with 54,700 currently employed. The City’s unemployment rate is at a low 3.8%, compared to the Los Angeles average of 4.5% and State average of 4.7%. The most common job groups are Management, Arts and Recreation, Sales, Administrative, and Business. The occupations with the fastest project job growth in the Los Angeles County area include Mathematicians, Personal Care Aides, and Statisticians.

Santa Monica is home to Santa Monica College (SMC), a community college founded in 1929. Many SMC graduates transfer to the University of California system. It sprawls over 35 acres and enrolls 30,000 students annually. The Art Institute of California – Los Angeles is also in Santa Monica near the Santa Monica Airport.

Santa Monica has made getting around easy with its award-winning bus system, electric shuttles, and bike paths. Major transportation options include:

Employees in Santa Monica have a shorter commute time of 23.3 minutes than the national average of 24.8 minutes. The largest share of workers drives alone, followed by those who work at home and use public transit. 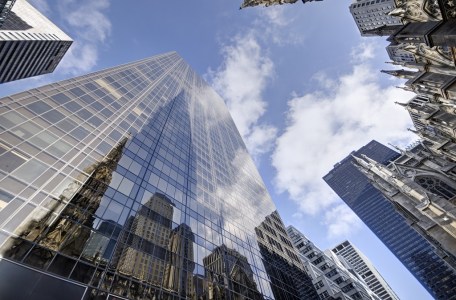 $24 billion worth of assets changed hands in the top 50 biggest office deals to close in 2018. Google, Disney, Samsung mingled with established top CRE players. Check out the full list and read up on last year’s most notable U.S. office investments.