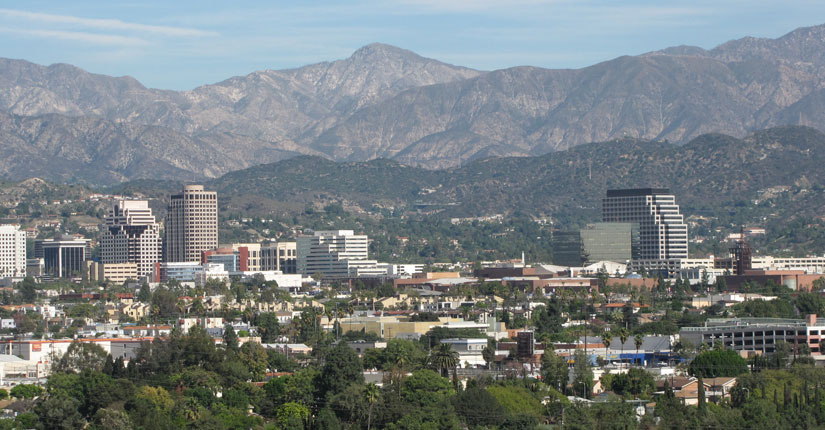 Burbank is a city in Southern California, located in Los Angeles County, just 12 miles northwest of Downtown Los Angeles. The city of Burbank is a unique urban community nestled between the Hollywood Hills and the Verdugo Mountains, near Highway 5 and Highway 134. The city occupies a total land area of 17.16 square miles and serves a population of 105,110. Referred to as the “Media Capital of the World,” Burbank is home to numerous media and entertainment company headquarters, including The Walt Disney Company, Warner Bros. Entertainment, and Nickelodeon Animation Studios. Burbank strives to provide a high quality of life for its residents, visitors, and businesses, while promoting community engagement, as seen with projects like the Chandler Bike-way, Stough Canyon Nature Center, Robert R. Ovrom Park and a new and expanded state-of-the-art Buena Vista Branch Library. In 2008 and 2010, the City of Burbank was named one of the nation's 100 Best Communities for Young People for its efforts to provide experiential and multi-faceted learning opportunities for its youth. Burbank commercial real estate accommodates over 17,500 businesses in an economy that is distinguished by its strong entertainment and aviation sectors.

While Hollywood may be a symbol of the entertainment industry, much of the actual production occurs in Burbank. Burbank maintains its long-standing relationship with Warner Bros. and Disney and is now home to hundreds of media and related support companies such as ABC, Cartoon-Network Studios, Nickelodeon Animation, Yahoo!, Clear Channel, and other postproduction, film processing, special effects, equipment rental and related businesses. Many entertainment companies have their headquarters or main facilities in Burbank, with numerous ancillary companies that can be found throughout the City. Burbank also hosts major retailers, including IKEA, Sears, Macy’s, and Old Navy, that continue to report strong sales in Downtown Burbank. More people work in Burbank each day than live in the City, with its media, entertainment, telecommunications, and Internet industries dominating both employment numbers and payroll. The City’s largest employers include The Walt Disney Company, Warner Bros., Providence Saint Joseph Medical Center, Bob Hope Airport, and American Broadcasting Company. The median household income in the City is slightly higher than the state average at $66,000.

Burbank is home to the second largest office space market in the San Fernando Valley, with most of the space utilized by the entertainment industry. The Los Angeles County office market continues to be driven by technology and entertainment growth, while healthcare lies not far behind. Tenant demand is expected to continue to chip away at vacancy throughout the remainder of the year, while record-high levels of employment sustain through 2017. The City continues to see expansion and relocation development by major company projects such as the IKEA project relocation, which is scheduled to provide Burbank with the largest IKEA store in the nation, and the Nickelodeon campus extension, which will include 114,000 square feet of office space, plus a 137,000 square feet of parking garage to open Summer 2017.

The Burbank office market hosts a total office space inventory of over 7 million square feet, with an office space vacancy of 11.3%. The Burbank submarket has lower rates than the rest of the Metropolitan Los Angeles market, but is currently experiencing a rise in rates.

Downtown Burbank provides an urban mix of shopping, dining, and entertainment, including the San Fernando Strip and the Burbank Town Center. The Downtown Burbank office market is focused on attracting “tech savvy” guests with higher disposable incomes by offering free Wi-Fi service throughout the area.

Burbank Media District is a popular and thriving location for businesses in the entertainment industry. The Burbank Media District office market hosts many national and international companies, creating ideal networking opportunities for any creative business. A range of cafes, bars, restaurants, and shops are all within walking distance, providing venues for business lunches and breaks from work.

The Los Angeles County boasts a diverse labor force of over 5,102,000. Unemployment rates continue to decrease both locally and statewide. The City of Burbank boasts a low unemployment rate of 4.2%, and continues to be lower than neighboring city, Glendale (5.0%), and the county rate of 4.5%. The County’s occupations with the highest projected growth include Mathematicians, Statisticians, and Personal Care Aides. Those with the highest wages include Surgeons, Physicians, and Chief Executives.

The City of Burbank is administered by the Burbank Unified School District and home to several California Distinguished Schools. Both its public and private K-12 schools routinely score above state and national average test scores. According to U.S. News Best High Schools rankings, the district contains three schools that received gold, silver or bronze medals in 2014.

The largest university in Burbank is Woodbury University, just two miles from the Burbank center. Woodbury has a number of undergraduate and graduate programs, including business, architecture, and a variety of design programs. A number of smaller colleges are also located in Burbank, including several make up and beauty trade schools serving the entertainment industry. The nearest community college to Burbank is Los Angeles Valley College, which is just 5 miles west of the city.

Burbank contains about 227.5 miles of streets, nearly 50 miles of paved alleys, 365.3 miles of sidewalks, 181 signalized intersections and 10 intersections with flashing signals, according to official city figures. Burbank is serviced by several transportation options, including its own Bob Hope Airport. Burbank area commute options include:

Employees in Burbank have a commute time of 24.5 minutes, slightly shorter than the national average of 24.8 minutes. The largest share of workers drives alone, followed by those who carpool and/or work at home.

COMMERCIALCafé is your first and only stop when it comes to commercial real estate leasings in Burbank, Los Angeles County, CA. Search through our extensive selection of commercial properties for lease with current space availability in the area ranging between 1340 square feet and 197307 square feet. Discover the right property from our 121 listings by using our advanced search function, which includes search by property type, space availability, management company, lease rates, and more.