The Top 100 Property Taxes in the US

Property owners in the U.S. shell out substantial–sometimes huge–amounts of cash on property taxes every year, and those taxes only increase as a building changes hands at a higher price and becomes more appealing to investors. The fact that the top taxpaying buildings in the U.S. are located in Manhattan won’t necessarily come as a shock, either, but the difference in numbers might. The New York City commercial real estate market remains the destination of choice for national and offshore investors alike, and some of the largest corporations in the world are based there. So it makes sense that Big Apple property owners would pay sky-high amounts in taxes–but the numbers are much higher than you think. Take the General Motors Building, for instance: Boston Properties spends more than $71 million on taxes alone for its Fifth Avenue office building. That’s an excessively high price in itself, but when you compare it with property taxes paid elsewhere in the U.S., that number seems downright outrageous. However, there are a few properties outside of New York that also fork over big wads of cash on taxes every year. Some you’ll recognize, and some might surprise you, but they all earned a spot on our list of the top 100 taxpaying properties in the U.S.

We used public records to compile a list of the 100 buildings that commanded the highest property taxes in the U.S. in 2016 (see ‘Methodology’ for details). The results are a mixed bag: our list includes office buildings, apartment buildings, mall and entertainment parks and industrial properties, scattered across nine different states. The Avenue of the Americas seems to be the most expensive street in the U.S.–14 properties on our list are located here, commanding a total of $428 million in property taxes in 2016. In fact, 75 out of the top 100 taxpaying buildings are located in Manhattan, shelling out a combined $2 billion in property taxes last year. Check out the full list below: 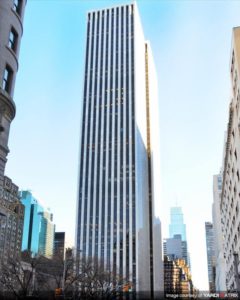 The 49-year-old, 50-story office building at 767 Fifth Ave. is one of Manhattan‘s most recognizable–and most expensive–office gems. Property owners Boston Properties, Zhang Xin and the Safra family shelled out nearly $72 million on property taxes in 2016, making the General Motors Building the top taxpaying office building in the U.S. The towering structure is renowned and treasured for many reasons: the building housed CBS’s The Early Show from 1999 to 2012; in 2003, it broke sale records when it traded for $1.4 billion; then, in 2008, Boston Properties acquired a 60% interest in the building for $1.7 billion. The GM Building also features 150,000 square feet of retail space, including Apple’s flagship cube-shaped store, and offers tenants views of Central Park.

The 8,757-unit Stuyvesant Town residential community located at 252 1st Ave. in Manhattan managed to sneak in and occupy the third spot on our top 100, right between the General Motors Building and the MetLife Building. The 8.9 million-square-foot complex built back in 1945 pays in excess of $60 million on property taxes–which translates into $7 per square foot. By comparison, the 1.8 million-square-foot General Motors Building shells out $39 per square foot in taxes. The gargantuan multifamily community was acquired by Blackstone affiliate LivCor in late 2015, as part of a $4.1 billion portfolio transaction that also included the 2,481-unit Peter Cooper Village Apartments.

Taxes Reach Nuclear Levels in the US

There were only 25 entries located outside New York City to make our top 100 list. Most of them are retail centers and hotels, including popular destinations such as Mall of America in Minneapolis, Borgata Hotel, Spa & Casino in Atlantic City and the Bellagio in Las Vegas. However, five major industrial developments also managed to sneak in–including the top taxpaying property in the country, the Northport Power Station. Located on the north shore of Long Island, the natural gas and conventional oil power generating facility was built back in 1967, and is the largest oil-fired electric generating station on the entire East Coast. The plant pays more than $80 million in yearly property taxes.

The Exelon – Byron Nuclear Generating Station in Rockvale Township, Ill., pays nearly $37 million in property taxes, landing the 25th spot on our list. Owned and operated by Exelon Corp., the largest electric holding company in the country by revenue and the largest operator of U.S. nuclear power plants, the Ogle County plant cost $4.5 billion to develop and was completed in the late 1980s. The Byron nuclear power plant provides electricity to the city of Chicago and northern Illinois. There were two other industrial properties located in Chicago to make our list–the ExxonMobil Joliet Refinery, which forks over more than $29 million in yearly property taxes, landed the 30th spot on our top 100, surpassing the iconic Willis Tower. The other one is the Wood River Refinery, located in Roxana, Ill., which pays over $18 million in yearly property taxes, landing it the 69th spot on our list.

The final industrial property to make the cut is the Xcel Energy Monticello Nuclear Generating Plant, which managed to secure the 75th spot on our list of 100 taxpaying U.S. assets. Located in Monticello, Minn., the 1971-built facility shells out nearly $17.5 million in property taxes each year, 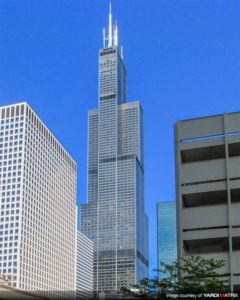 Number 34 on our list is occupied by the iconic Willis Tower in Chicago, which commands nearly $30 million on property taxes. The 108-story, 3.8 million-square-foot steel-and-glass tower is also the top taxpaying building in the Windy City, and is now in the midst of a $500 million renovation. Current owner Blackstone paid a record $1.3 billion to acquire the building at 233 S. Wacker Drive back in 2015. The towering structure maintains its dominating position as the tallest building in Chicago and the second-tallest in the U.S. and the entire Western Hemisphere. The tower’s famous Skydeck underwent major renovations in 2009 and now includes The Ledge–retractable glass balconies that can be extended 4 feet from the building’s facade, offering unobstructed–and dizzying–views of the city below.

Out of a total of 72 office properties featured on our list, 65 are located in Manhattan and 7 in Chicago. It seems like the skyscrapers grazing the Windy City skyline command some of the highest property taxes in the country. Nonetheless, when comparing the top taxpaying office buildings in New York City with those in Chicago, the differences are striking. Though the 108-story former Sears Tower on Wacker Drive is twice the size of NYC’s General Motors Building (#2 property on our list), the latter commanded a much higher tax in 2016. Boston Properties pays nearly $72 million in property taxes for its Midtown Manhattan building, while Blackstone’s Willis Tower costs roughly $30 million–a 147% difference. Let’s put it another way: while Blackstone pays $8 per square foot on property taxes for Willis Tower, Boston Properties shells out $39 per square foot for the General Motors Building–nearly six times more.

The 1,949-key New York Marriott Marquis first opened in 1985, right in the heart of Times Square at 1535 Broadway. The 49-story, 1.8 million-square-foot hotel landed the 15th spot on our list of top taxpaying buildings in the U.S. and was the top taxpaying hotel in the country in 2016. The hotel spends more than $37 million on property taxes, roughly on par with the taxes shelled out by the Solow Building owners. The New York Marriott Marquis features high-tech elevators that rise 48 stories to reach The View–the city’s only rooftop revolving restaurant and lounge and its third-highest restaurant, after ONE Dine at One World Trade Center and the Rainbow Room at 30 Rockefeller Plaza. The Marriott Marquis is also the second-largest hotel in New York City, surpassed only by the New York Hilton Midtown, which occupies the 43rd position on our list.

The largest shopping mall in the U.S. by both square footage and number of stores, the Mall of America is located in suburban Minneapolis and attracts 40 million visitors every year. The gigantic retail complex cost more than $650 million to build and costs $30 million in property taxes, landing the 29th spot on our list of top taxpaying buildings, right behind One Rockefeller Plaza in New York. Incorporating nearly 4.9 million square feet of retail and parking space and more than 520 stores, the Mall of America is big enough to fit seven Yankee Stadiums, 347 Statues of Liberty or 43 Boeing 747’s inside the premises. An expansion of the mall is currently underway, adding luxury retail, restaurants and office space. The south expansion was completed in 2013, adding a new Radisson Blu hotel, while the north expansion phase was completed in 2016, adding upscale shops, restaurants, office space and a J.W. Marriott hotel.

Originally developed by Walt Disney back in the 1950s, the Disneyland Resort mixed-use complex in Anaheim is now one of the most popular entertainment destinations in the U.S. The resort opened its doors to the public in July 1955, featuring the Disneyland theme park, a 100-acre parking lot and the Disneyland Hotel. As the project proved successful and attracted more and more visitors, the resort underwent expansion efforts that added more hotels, a second theme park dubbed Disney California Adventure, as well as the Downtown Disney shopping, dining and entertainment area. The amusement park owned and operated by The Walt Disney Co. through its Parks and Resorts division landed the 12th spot on our list, with close to $38 million in property taxes.

Notice Something Missing? Landmarks that Didn’t Make the List

Glancing over the list of properties showcased above, you might notice some important landmarks missing. Perhaps you’re wondering why iconic structures such as One World Trade Center, the Chrysler Building or Chicago’s Trump Tower are absent from the top 100 list. As it happens, many historic buildings located in Manhattan are tax exempt, meaning that they don’t pay any property taxes. One World Trade Center, the tallest building in the Western Hemisphere and the sixth-tallest in the world, is owned by the Port Authority of New York & New Jersey–since it’s owned by a governmental entity, the skyscraper is tax exempt. The Chrysler and Woolworth buildings in Manhattan are also tax exempt, while the Trump International Hotel & Tower in Chicago, the seventh-tallest building in the world, includes 486 privately-owned condominiums, making it impossible to calculate the exact amount of property taxes the building commands. There are other landmarks that didn’t make the top 100 list, including the iconic U.S. Bank Tower in Los Angeles, which commanded less than $10 million in property taxes for 2016. All this goes to show the difference between owning a building in Manhattan versus outside Manhattan. There is a massive gap in market valuation, and investors are eager to place their bets on the increasingly expensive New York City real estate market, even if it comes at a (much) higher cost.