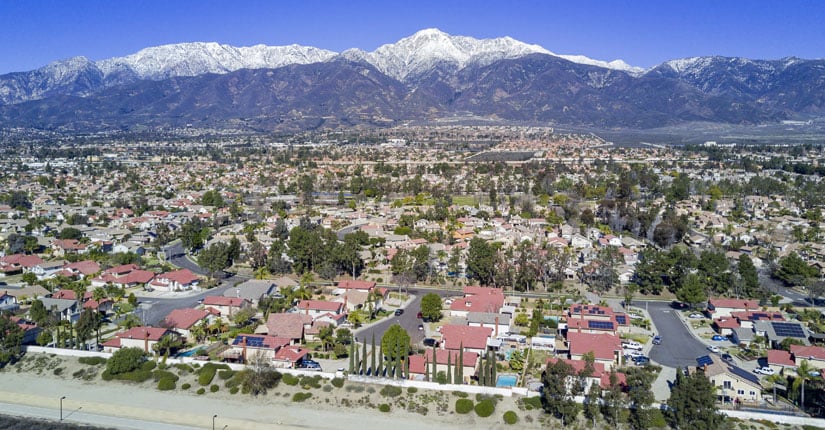 Rancho Cucamonga is a suburban city in San Bernardino County, located just 37 miles east of Downtown Los Angeles. With a population close to 175,000, Rancho Cucamonga has not only been ranked the 42nd Best Place to Live, but also the 13th-wealthiest neighborhood in Southern California. Top corporations like Coca Cola and Frito-Lay have opened branches here, encouraged by the city’s pro-business environment, which includes competitive lease rates for commercial and industrial uses, a top talent pool of highly skilled workers, and a favorable location close to airports, highways, and other transportation hubs.

Just behind Los Angeles' prestigious Bel Air, which ranked #13 in Richest Neighborhoods in Southern California, Rancho Cucamonga’s boasts an affluent economy. The city's median household income is above $80,000, putting it above average compared to San Bernardino County, the state of California. The city’s main industry is educational services, health care and social assistance (25.3%), followed by retail trade (12.3%), and manufacturing (8.8%).

Much of Rancho Cucamonga is residential real estate, but, as with neighboring Fontana and Ontario, the city houses numerous warehouse and distribution centers, handling many logistics services for Southern California. The nearby ports of Los Angeles and Long Beach keep the Rancho Cucamonga commercial real estate market busy. This is due to its convenient access to two major freeways and nearby Ontario International Airport.

E-commerce is another positive economic influence, as the Ranch Cucamonga commercial market also accommodates small-to-mid-sized businesses, with fulfillment centers that make use of new, more efficient buildings, right alongside online retail giant, Amazon.com, which has also opened a distribution center in the area.

As a result, the city has devoted former agricultural land in its southern area for commercial real estate needs. The land is relatively inexpensive, compared to metropolitan areas located closer to the ports. Therefore, Rancho Cucamonga’s commercial market offers much in warehouse complexes and staging areas.

Although located in a 7-square-mile tract used by a large number of distribution centers and smaller manufacturing businesses, Haven Avenue corridor is also home to office parks and retail centers, like Terra Vista. Unlike other traditional cities with a “Downtown” commercial area, Rancho Cucamonga has Victoria Gardens.

Victoria Gardens meets shopping mall with both traditional and metropolitan elements, in Victoria Promenade. It has large anchor stores and a food court but stores are arranged like city blocks complete with two-lane streets. A town center houses the Cineplex and eateries.

While the most common jobs in Rancho Cucamonga are in Educational & Social Assistance, Retail Trade, and Educational Services, the most specialized jobs are in Corporate Management.

Rancho Cucamonga leads Southern California in terms of developing a well-trained and well-educated workforce. The city has been praised as among the best in the country for preparing students for college and careers especially in a highly competitive global marketplace. Subsequently, forecasts are positive for Rancho Cucamonga’s employment growth over 21 industries with many in health care and professional scientific and technical services.

Average commute time for residents of Rancho Cucamonga is about 30 minutes. Roughly 80% of Rancho Cucamonga’s population drive alone to work. The other 20% chooses the Metrolink train service and the Omintrans Bus Service that run through the city.

Driving in Rancho Cucamonga is tempting, considering it is crossed by historic U.S. Route 66, as well as Interstate 15, and newer 210 freeways. Route 66 even crosses the south side of the city, devoted to industry, further isolating it from the city at large.