The City of San Mateo is located in the high-tech region of Silicon Valley, within the San Mateo County, in the San Francisco South Bay Peninsula area. The City covers spreads over 14.6 square miles and is situated just 19 miles south of San Francisco and 30 miles north of San Jose. San Mateo is surrounded by tidelands from the Bay to the east and coastal mountains to the west. Its resident population of 104,000 enjoys a moderate Mediterranean climate with warm and sunny summers and mild, damp winters, ideal for various recreational activities in the City’s many neighborhoods and regional parks. With its 35 parks, six recreation centers, 18-hole golf course, and three libraries, the City of San Mateo accommodates a wide variety of interests and experiences. San Mateo boasts a thriving economy with most jobs found in the technology, health care, financial and retail industries. Serving over 10,800 businesses throughout the area, the San Mateo commercial real estate market boasts some of the largest and most developed commercial cores in suburban San Francisco.

The City of San Mateo is one of the major centers of economic activity in San Mateo County, serving as a business, recreational, educational, and cultural hub. Employment in San Mateo is concentrated in three sectors: professional and financial services, retail, and health, educational, and recreational services. Notable companies based in San Mateo include Franklin Templeton Investments, Roblox, Fisher Investments, SolarCity, and GoPro. The largest employers in the area include Sony Interactive Entertainment and government agencies, such as San Mateo-foster City Unified School District and the County of San Mateo Medical Center. Residents enjoy a median household income of over $90,000—among of the highest in the San Francisco Bay area. The economy in the San Francisco metropolitan area, including San Mateo County, continues to show strong growth averaging at 4.1% (2015) compared the average U.S. metro rea growth of 2.5%. This growth and economic resilience is primarily attributed to the Bay Area’s technology sector.

Situated approximately halfway between San Francisco and San Jose, San Mateo is strategically located for those seeking to rent in the Bay Area with ties to both the city and Silicon Valley, made easy by direct access to three major freeways, US 101, Route 280, and State Route 92. Ideal places to rent office space in San Mateo fall within the downtown area and Bay Meadows. San Mateo’s downtown core and neighborhoods east of El Camino Real are more populous and hold greater density than those west of El Camino Real. San Mateo hosts one of the more prominent suburban downtowns in the San Francisco Bay Area, located between Tilton and 9th Avenues, Delaware Street and El Camino Real.

The San Mateo office market offers a total inventory of 7.58 million square feet of office space, with an overall vacancy rate of 15.3%, currently higher than the County average of 8.4%. San Mateo County recently experienced the first uptick in office space vacancy rates since 2012, fluctuating between at 7.0% and 7.5%. The average asking rent of $4.78/square foot on a monthly full-service basis declined from $4.83 in the previous quarter due to the increase of space.

Downtown San Mateo is home to over 800 shops and restaurants, many of them located in historic buildings from the late 19th and 20th centuries. The Downtown San Mateo office market is accessible by Caltrain, includes many large and small multi-story office buildings, and is situated close to Central Park, San Mateo’s signature park, making the area a busy employment center, both by day and by night.

Bay Meadows, a former horse racing track, is currently being redeveloped as a large mixed-use development meant to house new residential units, office space, retail space, parks, and a town square. The Bay Meadows Stations office project is scheduled to finish redevelopment in 2017, bringing much needed space to the city and expected to drive down rental rates as more availability opens.

The Bay Area’s unemployment rates fell to 3.1% from 3.6% at the beginning of 2017. The unemployment rate in San Mateo County is even lower, at 2.9%. San Mateo County hosts a dynamic and educated workforce of over 448,400, with just over 55,000 employees located in the City of San Mateo. The most common job groups in the city include Management, Administrative, Business, Sales, Business and Financial Operations, and Computer and Mathematical. The occupations with the fastest projected job growth include Biomedical Engineers, Statisticians, and Chemical Engineers.

According to the Bureau of Labor Statistics, the industries in the San Francisco-San Mateo-Redwood City, statistical area with the highest employment numbers include:

The city is home to the College of San Mateo, a community college. The campus of over 10,000 students is located on 153 acres in the western foothills of the city which offer a panoramic view of the San Francisco Bay. Nearby universities also include Notre Dame de Namur University, a private Catholic university of 2,000 students in neighboring Belmont, and Stanford University located about 12 miles to the south.

San Mateo is considered to be near the center of the San Francisco Bay Area, about halfway between San Francisco and San Jose, the region's two largest cities. Major transportation options include:

Employees in San Mateo have a longer average commute time, of 25.1 minutes than the national average of 24.8 minutes. The largest share of workers drive alone, followed by those who carpool and use public transit.

Who Grew the Most: Office Development in California Cities with Less Than 300K Residents

California means many things to many people. The Golden State is the birthplace of many of today’s tech behemoths, as well as a startup wonderland. Cities like San Francisco, Los Angeles and San Diego are attracting some of the best talent not just locally or nationally, but also from all over t... 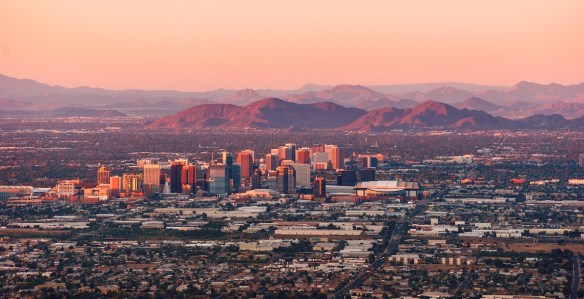 The Windy City recently celebrated the opening of Amazon’s expanded corporate base in the bustling Loop district. On Monday, July 1st, Mayor Rahm Emanuel joined representatives of the retail giant to mark the opening of the company’s newly expanded office at 227 W. Monroe St., just in time for...