We analyzed the top 50 U.S. office deals of 2019, and the results show an increased investor appetite for trophy assets outside of New York City. In particular, it was Class A office spaces in California—particularly in the Bay Area—and Washington’s Seattle and Bellevue areas that attracted most of the attention in the previous 12 months. Another important takeaway is that the number and individual value of office transactions in New York City has decreased significantly compared to 2018.

Using data from Yardi Matrix, we reviewed  all office buildings of at least 50,000 square feet and mixed-use properties that have more than 50% office space (for further details, read our methodology section). In addition to our usual top 50 office sales list, we also zoomed in to the regional level, reviewing the top 10 major deals in the Northeast, Midwest, South and West.

Check out the full list in the table below, and read on for more on the 2019 top 50 U.S. office sales and a roundup of the regional top 10 lists.

The sales volume of top-50 office deals in New York City also dropped by 41% year-over-year—from roughly $11 billion in 2018 to $6.5 billion last year. The second sale of the Coca-Cola Company Building—$937 million paid by SHVO—was the priciest office transaction in New York City. But, for once, it wasn’t enough to take the number one spot; that honor went to Google’s $1 billion acquisition of Yahoo’s former headquarters in Sunnyvale, Calif. Interestingly, the tech giant spent the same amount in 2018 on the Britannia Shoreline Technology Park in Mountain View, Calif. 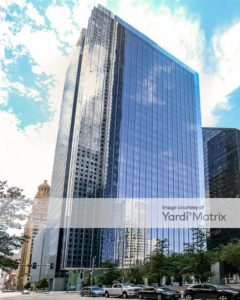 Outside of New York City, investors were especially keen on closing office deals in San Francisco and Seattle. Seven transactions in the top 50—totaling 3.7 million square feet of office space—were located in San Francisco; the largest of these was the Levi’s portfolio, which changed hands for $826 million in Q3. In Seattle, roughly 3.3 million square feet of office space was traded across five sales that made the top 50 list.

Two Houston office deals made the list. The first, which landed in twelfth place, was a two-building portfolio—consisting of JPMorgan Chase Tower and JPMorgan Chase Center; in June, Cerberus Capital Management paid $627 million to New York-based Hariri Interests for the properties.

The second Houston entry is the sale of the Bank of America Tower on 800 Capitol Street, which closed at the end of the year for nearly $415 million—landing in 32nd place. Swedish construction and development company Skanska transferred ownership of the 775,000-square-foot, class A office to Beacon Capital Partners.

While neither Austin nor Dallas office deals made the top 50, Pioneer Natural Resources Headquarters in Irving came in 16th. It was acquired by PRP Real Estate Investment Management for $584 million—roughly $519.30 per square foot.

Sales of offices in central business district (CBD) locations have the largest share within the Northeast top 10, with roughly 6.2 million square feet contributing 88% of the total square footage. Two buildings totaling 816,000-square feet were urban-situated properties. The 220,000-square-foot suburban office space in Alewife Research Center in Cambridge, Mass. traded in 2019 for $332.5 million, but that sale did not make the regional shortlist.

The list opens with three New York City office space transactions. The consecutive sales of the Coca-Cola Building in September take up the first two spots at $937 million and $909 million, respectively. The sale of the 840,000-square-foot 330 Madison Avenue—completed in December—is in at number three, with a price tag of $875 million.

Meanwhile, 100 Summer Street in Boston is the first entry outside of New York City on the regional list. Rockpoint Group paid $806 million, roughly $779 per square foot, for the 32-story Downtown Boston office space in October. For its former owner—EQ Office, a real estate company owned and managed by Blackstone—the sale of the 1-million-square-foot building marked the closing of the largest real estate transaction in history. In 2007, Blackstone acquired Equity Office Properties for $39 billion. It subsequently weathered the storms of the financial crisis, ending its investment journey with $7 billion in profits.

Five out of the 10 sales that made the Midwest regional list of major office deals—roughly 3.8 million square feet—were located in the CBD area. Two of the top 10 office sales in the region were in suburban locations, totaling nearly 1.3 million square feet. 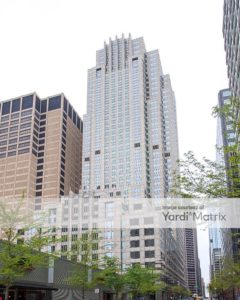 In October, Spear Street Capital forked over $412 million for 500 West Monroe Street in Chicago, making it the largest deal both in its market and throughout the greater Midwest. In 2011, Piedmont Office Realty Trust held the note for a $140 million mortgage, which it eventually foreclosed for ownership of the property. Prior to that, New York-based Broadway Partners had acquired the 966,645-square-foot office tower in 2007 from Shorenstein for $337 million.

After a slow 2019, investors hope that the 46-story building’s turnaround might signal an uptick in downtown office sale activity. While there were three additional major deals in the Chicago office market last year, all of them fell below the $300 million mark.

Meanwhile, the Wells Fargo Center in Minneapolis sold for $313.6 million in April, roughly $262.20 per square foot. It was the second-largest office deal in the Midwest, and the second-largest transaction ever in the Twin Cities market—a mere $6.4 million below the City Center building, which changed hands in 2018.

The new owner of the 1.2-million-square-foot office space at 90 South 7th Street is Starwood Property Trust, a company best known for creating Starwood Hotels & Resorts in the mid-1990s. The Wells Fargo Center was its second major office acquisition in Minneapolis; it also snagged The Colonnade for $100 million in 2017.

Deals for offices located in urban areas have a strong presence in the Western region’s top 10; specifically, six out of 10 entries were in this location class, for a total of 4.6 million square feet. Two properties, totaling roughly 1.9 million square feet of office space, were in CBDs. There were also only two suburban office sales within the regional top 10, but one of these two transactions—Yahoo’s former headquarters in Sunnyvale, Calif.—had the highest price tag in the West.

In July, Google closed the deal on a $1 billion office portfolio, buying up its one-time search-engine rival’s headquarters and adding 617,000 square feet to its already-massive footprint in the Bay Area. The company’s partnership with Lendlease—a major property and infrastructure group—and its investment in real estate within San Jose, Sunnyvale and Mountain View, is part of its greater vision for the region.

Google aims to encourage the development of several new live/work/play neighborhoods. The Mountain View-based company also plans to rezone for residential development $750 million worth of land that is currently zoned for office space to address woes about housing affordability and availability in the area.

Three of the top 10 transactions in the South were suburban offices, encompassing roughly 3.16 million square feet. Nearly half of the sales on the South regional list were for office properties in CBDs.

Texas dominated the South’s top 10 major office deals, providing half of the total entries. Roughly 4.89 million square feet of office space in Houston, Irving, Dallas and Austin changed hands last year; most of the traded properties were located in CBDs. In fact, Texas contributed most of the overall CBD office square footage in the list—3.76 million out of a 4.86 million regional total. 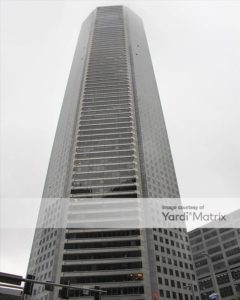 Cerberus Capital Management, which took ownership of JPMorgan Chase Tower and Center in June, announced it would renovate part of the two-building complex. While the 404,000-square-foot office tower at 601 Travis Street had been updated in 2011, the 75-story property at 600 Travis Street—the tallest commercial building in Texas—is ripe for redevelopment. Improvements will include the addition of coworking spaces, updates to the lobby and a new conference center.

The Bank of America Tower in Charlotte and 5600 Fishers Lane in Rockville, Md., close off the region’s top five, both trading for $436 million. The North Carolina tower’s average price per square foot is $502, while the Rockville building’s average is roughly $327.

Google Fetches Sunnyvale Campus in #1 Office Sale of 2019; Hines Sheds More Than $2.5 Billion Worth of Assets

Hines, EQ Office and JPMorgan Asset Management were the top sellers in 2019 on our list, each shedding billions in assets throughout the U.S. 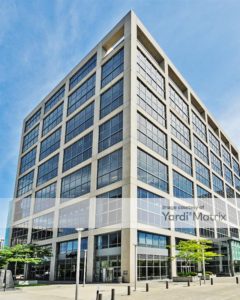 In the closing days of 2019, Hines finalized the sale of The Summit in Bellevue —a three-building complex that encompasses the completed Summit I and II buildings and a third office space still under construction and pre-leased by Amazon. The $756 million sale was Washington state’s largest office deal of the year. Hines received a further $525 million for the La Jolla Towers in San Diego, which it previously owned through a joint venture with JPMorgan Asset Management. It also sold Minneapolis’ Wells Fargo Center—a property it had co-owned alongside Blackstone—for $313.6 million. Other sales include 800 Fifth Avenue in Seattle that fetched $540 million; the 550 Terry Francois building in San Francisco, which sold for $342.5 million; and an $88 million Southlake office portfolio in Lenexa, Kan., which didn’t make the top 50.

JPMorgan’s $1.3 billion sales consisted of the 1-million-square-foot Manhattan office space at 195 Broadway—for which L&L Holding paid $800 million in September—and the two-building Terminus portfolio in Atlanta, which was acquired by Cousins Properties for $503 million.

We used Yardi Matrix data to analyze all transactions recorded through January 21, 2020. Only office buildings equal to or in excess of 50,000 square feet were included. In the case of mixed-use assets, only properties featuring more than 50% office space were included in the analysis. We counted portfolio deals as single transactions and only analyzed portfolio sales of buildings that were part of the same campus or property, and that shared the same transaction terms. Distressed sales were excluded altogether. Regional lists were compiled according to the U.S. Census map of regions and divisions of the United States.

Next Story:
What It Costs to Rent in the Top 10 Cities for Startups in the U.S.